OUR HONEST OPINION OF THE ARTS HOTEL 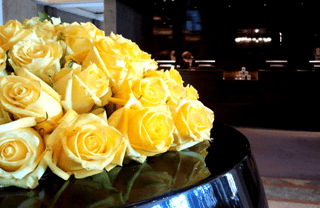 We often have guests asking us what do we think about such or such hotel. This is why we decided that it’d be a good idea to start a series of hotel reviews in our blog. We’ll be publishing one each month (the rest of the posts will be about other Barcelona things: we don’t want the blog to be too mono-theme either).

We decided to open the series with the Arts Barcelona, one of the top 5-star hotels in Barcelona, because it’s used by many of our guests and we know it well. So today we are sharing with you the pros and the cons of staying in this popular luxury hotel that belongs to the Ritz Carlton chain (just make sure not to call it Ritz Barcelona, or your cab driver might take you to the wrong hotel).

These are our 5 favorite things of the Hotel Arts Barcelona:

As a tour guide, I get to interact A LOT with concierges. Some are nice, some are resourceful, some are… mean. But the concierges of the Arts Hotel are the best I’ve ever encountered. Specially some of them that have been there for as long as I’ve been giving tours. If you are lucky to be assisted by Carlos, Blanca, Mary, Maria, Carmen or Alex, you couldn’t be in better hands! 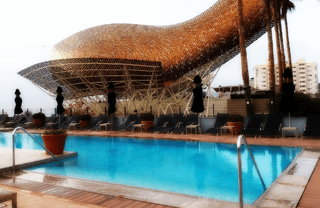 At the very top of the hotel, nearly touching the sky we find the 6 Senses Spa. Probably the only one with the best panoramic views in Barcelona; breathing the peace in one of their hydrotherapy pools, sauna or steam bath while watching the calm of the Mediterranean sea. It’s equipped as well with 8 treatment suites where you will be able to choose among plenty of beauty treatments or relaxing massages. Prepared to enjoy heaven?

Chef Paco Pérez runs Enoteca, an outstanding restaurant inside the Hotel Arts Barcelona Ritz Carlton featuring a wine list of more than 500 wines and two Michelin stars. Here you’ll find a deconstruction of the traditional Mediterranean cuisine, making special emphasis on fish and seafood. By the way, the Sunday brunch in the Cafe Veranda of the hotel is also one of the best in Barcelona.

It’s the tallest hotel in Barcelona (505ft). Situated in the waterfront, the views are one of its strengths: from the sea horizon to the mountains and, in between, all the city at your feet. Daylight or nightlight, it won’t leave you indifferent.

When you feel like taking a break, being outdoors is always a recommendable option. The hotel offers you a sunny garden with olive trees and hammocks, an outdoors hot tub and a nice swimming pool that is much bigger than most hotel pools in Barcelona.

AND BONUS! Is really everything always great there? These are the Ritz Carlton Hotel Arts Barcelona downsides that they won’t tell you: 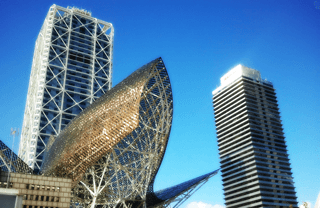 Having this beautiful views to the Mediterranean sea and being in the waterfront have some inconveniences as well. The hotel is located far from the city center and the best way to move around is by taxi or subway unless you like walking a lot. On the other hand, the hotel is also often used by large groups that when arriving, leaving or waiting for an event to start crowd the lobby and create lines at the reception and the concierge.

So what about you? Head to the comments below and tells us: have you ever stayed there? How was your experience at the Arts Barcelona?