ADVENTUROUS FOOD IN SPAIN YOU SHOULD GIVE A CHANCE 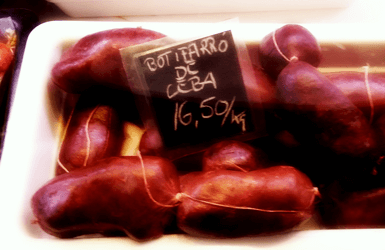 All countries have food that people from other areas might think are not edible. Or plainly disgusting to think about eating them, LOL. In Spain, we have some adventurous foods that you probably have never heard about. Do you dare trying them without asking what they are? Maybe if you are daring enough. But if you prefer not to risk, keep reading to discover what oddities we have in our country so you can decide beforehand if you want to try them or not. Just keep in mind that if Spaniards eat them, you can as well! Ready to find adventure in food?

These are our favorite Spanish adventurous foods and tapas:

This thick black sausage is traditionally made of minced pork, blood, rice and onion. But there’s hundreds of ways of preparing it depending on the area. It was traditionally made when a family slaughtered a pig, and it became a staple for poor families. Nowadays, it’s served as a tapa or in sandwiches. And in Barcelona, at the Boqueria market the endearing Juanito from Pinotxo Bar makes a delicious dish mixing them with chick peas: earthy and memorable! 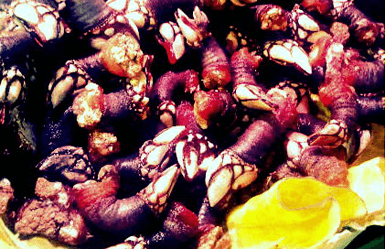 Have you ever seen this shellfish stuck in a boat? Probably yes and you wouldn’t think about eating them, right? And they are actually an expensive delicacy in Spain! But don’t worry: the ones we eat don’t come from boats but they are collected from their natural environment: they grow in cold waters such as the Atlantic ocean, over the rocks where waves crash. So it might be the danger that involves catching them (as you could get killed by a wave when trying) what makes them  more expensive than lobster. And while they look like a dragon fingers, they have a very delicate flavour that reminds you of sea water. The best ones come from Galicia, North of Spain, and they are just boiled on salted water with a bay leave. You’ll find them at the best marisquerías (seafood restaurants) in Spain, or if you prefer a more informal atmosphere, head to the bottom of La Boqueria market to find La Gardunya, an off the beaten path market bar: order your barnacles and one of the waiters will get sent to the fish section of the market to get some for you, that will be cooked just for you. Fresher impossible!

This very traditional stew from Catalunya is mostly made with veal’s nose and  trotters (although sometimes it can be pork), and due to the influence of Spanish culinary culture tripe is often added, too. Ideally, it should be served a little bit hot but not too much. The other ingredients are onion, garlic, tomatoes, chili, chickpeas, chorizo (spicy or not) and cured ham. You’ll find it in traditional Catalan bars and some restaurants. In la Boqueria both Pinotxo and El Quim serve it often. And if you are staying at an appartment and have the opportunity to heat up food, head to the offal shop Rosa (right in front of El Quim bar): besides her raw meats she also sells ready-made cap i pota and other offal dishes to go, that she cooks with love and pride in her professional kitchen beside the market. Just a few minutes of microwave and tada! She spares you the hours it takes to prepare a good offal meal.

I know, rabbits are pets! But in Spain we eat them, too. Actually, the Romans called Spain “Hispania”, that meant Land of Rabbits in Latin, because of the abundance of this animal. And what would people eat in those times? Of course whatever was common to catch! And that’s how despite their speed and cuteness, hunger and survival made rabbit meat part of the local culinary culture. It’s actually a very tasty meat, although it can be a bit dry. Like chicken, there are thousands of ways of cooking it: baked, stewed, fried… In the countryside it’s often served grilled with French fries. And in Valencia they consider it a main ingredient of paella, together with snails and beans (yes, the original paella was a meat paella instead of the seafood one that is now so popular).

This stew dish is very popular in Spain, specially in Madrid where they use veal or pork tripe cooked with bacon, chorizo, morcilla, paprika, garlic, a touch of chili and other spices. But in other regions of Spain tripe is also cooked with their own regional touch. I already mentioned that in Catalonia we add it to Cap i Pota, while in Andalucia and Galicia they make it with chickpeas: in the South adding some potatoes, and in the North adding more meats. The result is in general a very earthy dish with a gelatinous texture. Again, the Boqueria market (or any local market, I should say) is a great place to taste it if you are daring enough.

AND BONUS! The “sexiest” adventurous food in Spain (or maybe not, LOL): 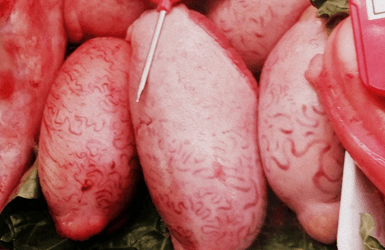 How much an adventurous eater are you? Criadillas are actually the testicles of any animal slaughtered in the slaughterhouse, but we usually eat the bull ones (even better if you can get those of a bull killed at the last bullfight – but alas, there are no more bullfight left in Barcelona, you’ll have to go to Madrid or Andalucía to get them). They are easy to prepare: first you boiled them (as you do with most offal parts), slice them and then fry or stew them. And no, we are not the only weirdos eating sexual organs: they are also eaten in some English-speaking countries, where they are called stones, mountain oysters or rocky oysters.

Did you know you can see (and maybe even taste) all this weird Spanish food in our food tours?

So what about you? Head to the comments below and tells us: have you tried any of this weird Spanish food and did you like it?