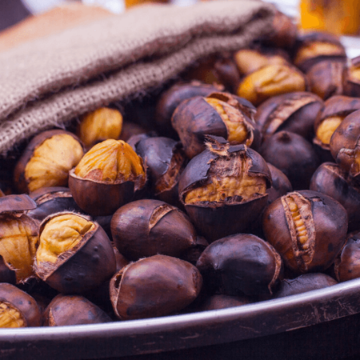 ALL SAINTS DAY IN BARCELONA - NO HALLOWEEN HERE!

In most cultures human beings have dedicated one day of the year to the memory of their deceased. Some of these festivities are as colorful as the Mexican Día de los muertos, famous all over the world. In Catalonia, with a strong Catholic influence, the dead are worshiped on Tots Sants day (November 1) and on the Dia dels Difunts (November 2). On the evening of November 1 we celebrate a feast called La Castanyada, because of the tradition of eating chestnuts (“castanyes” in Catalan).

Families and groups of friends continue to gather maybe not so much anymore to spend the night together praying for their dead, but mostly to have fun and eat sweets, baked sweet potatoes and chestnuts, accompanied of muscat and traditional liquors. Today, globalization is leading to these traditions being mixed with other such as Halloween, and it is not unusual to see children in the streets dressed up as monsters or shop windows decorated with horror items, even if that's not a local thing.
VISIT BARCELONA ON HALLOWEEN WITH US

These are the most authentic best things to do for Halloween in Barcelona (I mean, All Saints day):

Visit a church and light a candle

Although originally it was a pagan holiday, All Saints’ Day in Catalonia is a celebration greatly influenced by Christianity. A tradition repeated throughout Europe was to light candles in memory of lost loved ones in the hope that light will guide their souls. In some villages these lights were placed inside empty pumpkins and left on the windowsills or on the cemetery walls. Later on, the Christian tradition changed that for candles lit inside churches.

In Barcelona there are many beautiful churches but for safety reasons it’s not possible anymore to lit real candles inside the most famous ones such as Sagrada Familia, the Cathedral of Santa Eulalia or Santa Maria del Mar: there you’ll have to put a coin in a machine to get a fake candle to lit up… For real candles you either have to go to the cloister of the Cathedral or to some other smaller church off the beaten path.

TAKE A TOUR OF THE CATHEDRAL AND THE SAGRADA FAMILIA

Roast (or buy) and eat chestnuts and sweet potatoes

Another of the very old  customs linked to All Saints Day is to eat autumn fruits. When at night families gathered by the fire to lit candles and pray for the souls of their dead, they’ll roast chestnuts and sweet potatoes in the fireplace so that people could eat between prayers.

In Catalonia it’s very common to find street stalls selling chestnuts and sweet potatoes freshly roasted in large stoves. We recommend you to stop in one and buy a cone of chestnuts to eat as you walk or seating in a bench while people watching.

Buy flowers and go to the cemetery

Besides light, another classic offering for the dead are flowers. On All Saints Day the cemeteries of Catalonia are filled throughout the day with families visiting the graves of their loved ones. It is traditional to clean the tombstones and deposit fresh flowers, so that day the cemeteries are full of life and colors.

WE'LL CREATE A CUSTOM CEMETERY TOUR FOR YOU

We recommend you to visit the cemetery of Montjuic in Barcelona, overlooking the sea, very old and popular, and full of noble tombs decorated with religious sculptures. You can also visit the tombs of illustrious characters such as the soprano Victòria dels Àngels or that of the collaborating architect of Gaudí Josep Maria Jujol.

The tradition of going to see the theater play Don Juan Tenorio seemed to have been lost over the years. But gradually it’s recovering and, in addition to theaters, in some regions some major scenes are represented in cemeteries or churches. Possibly the origin is due to the fact that part of Don Juan’s story takes place in a cemetery and is closely linked to death.

The “Panellets” are the typical sweets in Catalonia for the eve of All Saints. It is not known exactly its origin although it is believed that they come from some type of ancient funeral sweet. The most traditional are made with of ground almond dough and then decorated with pine nuts or almonds in grain.

Many families continue to prepare them at home with the help of their children but more and more today people choose to buy them in bakeries and cake shops. Some of the new flavors that have been growing in popularity over these years are coffee, lemon, chocolate…

AND BONUS! Do you know who is the most famous old lady during All Saints?

The women who sell chestnuts are known as “castanyeres” and they have become a traditional character usually represented wearing an apron and a headscarf. In the minds of Catalans, the castanyera is associated with the feast of All Saints because of the custom of eating chestnuts and sweet potatoes that day.

In many schools, children are visited by the Castanyera (usually a teacher disguised with an apron and a headscarf) who tells them some tale and gives them roasted chestnuts.

SO WHAT ABOUT YOU? HEAD TO THE COMMENTS BELOW AND TELLS US:
How do you celebrate this time of the year at home?