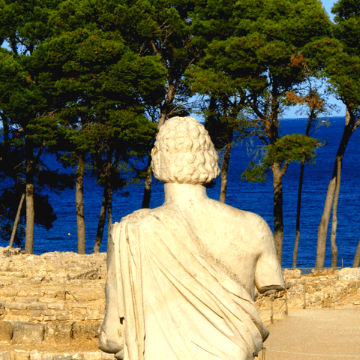 Catalonia has a long history that starts many centuries ago even before the Romans, with the Iberian tribes. If you love archaeology, you’ll be excited to hear that there are lots of great ruins near Barcelona that you can visit in your next trip. Prehistorian, Greek, Roman, medieval… and often a mix of them together in one single site! Your opportunity to learn more about how our culture was born and developed, and who was living hear in the old times and how.

Many times, the ancient people achievements and creativity will surprise you! What they were able to build and the solutions they found for their everyday problems are often impressive. Are you curious about them? Today we are sharing with you our favorite ones.
YOUR PRIVATE TOUR OF THE ROMAN TARRAGONA

Declared World Heritage by UNESCO and featuring some of the best archaeological sites in Spain, if there is one archaeological site you should visit, it’s Tarragona. Called Tarraco in latin, it was home to many Roman Emperors that promoted the construction of big infrastructures such as a Circus, an Amphitheater and a huge Forum, among other.

The Roman temple is supposed to be buried underneath the current Cathedral of St. Tecla. Tarragona is easy to reach by train from Barcelona, but if you can, go by car and see on the way some cool Roman sites in the suburbs: an aqueduct and a stone-quarry in the AP2 highway, and an Arch of Triumph and a funerary monument on the N-340. We can also organize your perfect Tarragona tour in one day.

A longer drive of almost 2 hours will take you to the Costa Brava, the Empuries ruins were the first point where the Greek reached our land. They founded a settlement there 600 years before Christ, and were later on followed by the Roman who arrived in 218BC during a military campaign and would create a permanent town in the following years.

Greek and Roman shared the town for some time and got along well, up to the point that when the Greek community entered a decadence, they were offered the Roman citizenship. The most important part is the Asclepius temple, besides some fish facilities and Roman homes, but we still hope to find more relevant structures as only a portion of the town has been excavated. In the summer it is possible to snorkel over some Greek underwater remains in front of the beach.

Very close to the Penedes Wine Country, on top of a hill only reachable by car in just about 1 hour from Barcelona you’ll find this scenic archaeological site perched on top of a cliff. The site is exceptional not just for its views, but because in a relatively small space you can find ruins from the Iron Age, the Iberian times, the Romans and the Middle Ages. Not much is left from the Iron Age, though (just a few instruments and the remains of a shack next to the village walls), but the rest of the periods are well represented. 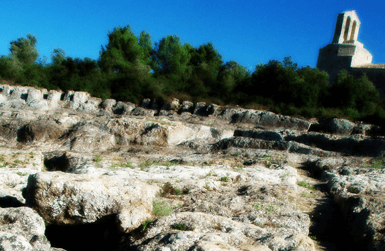 A CUSTOM TOUR TO YOUR FAVORITE ARCHAELOGICAL SITE

Our favorite parts of the visit are the Romanesque church surrounded by a medieval necropolis with tombs excavated in the rock, the views from the Roman watch tower and the Iberian house with the replica of the skeletons of two twin baby girls that were found in a tomb there. After the visit, it’s also worth following the signs into the nearby woods that take you to the Albats necropolis, with human-shaped tombs excavated in the rock – most of them of children and infants.

The Iberian where the tribes that inhabited Spain before the Romans but right after the end of pre-history: they are considered to belong to “history”, not pre-history because they had an alphabet and were able to write (although their language has never been deciphered).

Ullastret is the largest settlement of the Iberians in Catalonia, as was occupied by the Indiketes, the local family of the Iberian tribes. In this visit you’ll be able to see the walls around the village, cisterns and silos, temples and towers. It’s also about 1.5 hours from Barcelona and you’ll need a car to get there. On the same day you might want to take the opportunity to visit the Pubol Castle, that Salvador Dali offered to his wife Gala as a present.

Museum of History of Barcelona

While we know the first inhabitants of Barcelona to have been the Laietans (an Iberian tribe), we’ve never found a relevant settlement from their time. Instead, there are many Roman ruins in the Old Town. Some are visible from the street (walls, temple of Augustus, cemetery…), but the most impressive of all is beyond doubt the underground excavations of the Museum of History of Barcelona around the corner from the Cathedral.

The visit takes a bit more than 1.5 hours and starts with a video about the foundation of the city and its early days, all the way until present times. Then an elevator takes you to the basement, where you are taken around the old streets of the Roman Barcino to see the remains of a laundry business, a fish spread factory a wine cellar and a Temple, then proceed to the PaleoChristian part of the excavation where an extraordinary baptistery has been recently open to the public. We visit it in our Roman Barcelona Tour.

AND BONUS! These are the best archaeological museums in Catalonia:

Tarragona and Barcelona Museums of Archaeology

The National Museum of Archaeology of Tarragona is located next to the Pretorium tower that connected the Forum and the Circus. You’ll find there 4 floors devoted to explain how the Roman leaved and built in our area: architectural elements such as columns and decoration pieces, lots of sculptures and relieves, an impressive collection of mosaics (don’t miss the Medusa one, and the one with the fish), as well as daily use objects (coins, amphorae, glass items, jewels and cosmetic objects… an even an articulated doll that was found on a girl grave). 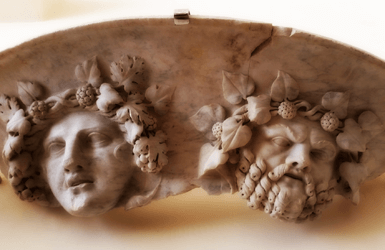 EXPLORE THE BARCELONA ROMAN SITES WITH US

As for the Museum of Archaeology of Barcelona, it mustn’t be confused with the Barcelona City Museum of History we’ve discussed before (although they can be both visited with this ticket): this one is located in the Hill of Montjuic, and in 1.5 hours you’ll learn about the prehistorian times in Catalonia, the Iberians and their tribes, the Greek and the Phoenician, the Romans and the Visigoths. A must for history and archaeology lovers.

Where are your favorite ruins near Barcelona?