Finding Your Way From The Barcelona Cruise Port Into The City

IS IT EASY TO GET FROM THE BARCELONA CRUISE TERMINAL INTO TOWN?​

Every year more than 2 million people use the Barcelona cruise port. Traveling by cruise it’s a great way to visit different cities and countries in a short period of time, without the hassle of packing and unpacking each time you arrive to a new destination. 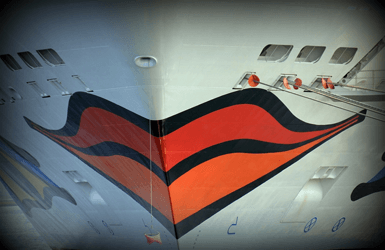 However, planning your touring can be tricky, as it’s harder to figure out how far will the pier be from the city, and you need to organize your visit well in order to take the most out of the few hours that you’ll be in town. This is why today we are going to help you figure out how to plan your sightseeing starting from your Barcelona cruise terminal.

Here is how to get in and out of the Barcelona cruise ship port:​

Walking, not a good idea​

The port of Barcelona is basically divided in two piers. While passengers from small ships such as Windstar and Aida stop at the WTC Barcelona Cruise Terminal that is only 5min. walk from the Statue of Columbus, where la Rambla begins, most large cruises stop in the Moll Adossat terminals and from there you need to cross the Porta d’Europa, the longest port bridge in Europe.

I don’t recommend trying to walk it, as it’ll take you some good 30 min. to get to la Rambla (under the hot Barcelona sun and with no shade to stop under… Trust me, I’ve done it and won’t repeat it again!). Anyway, after crossing the bridge you can walk up la Rambla and see the Gothic Quarter. You might even reach Passeig de Gràcia where the Gaudi apartments are, but you’ll need strong legs to do that!

There is no subway station in the pier: you’ll have to get in town to use it. The closest subway station is called Drassanes, in the L3 line (green). It’ll ride you all along la Rambla and Passeig de Gràcia, and if you are ready for a walk uphill, the Vallcarca station it’s a 20min. walk to the Park Güell. 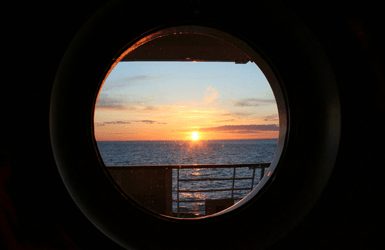 The same line takes you to Espanya and Parallel, from where you can access the hill of Montjuic (although if you only have a few hours and are on foot, I’d rather skip that part of the city). You’ll need to change lines to get to the famous Sagrada Familia church.

Some cruises arrange shuttle buses that save you the walk across the bridge: you often have to pay for this service, and wait until it comes. There are also public buses connecting the cruise ship port with the city. they are cheap but not very reliable as their schedule isn’t very regular (That’s why I don’t use them when I need to greet my clients at the pier!). They drop you near the statue of Columbus.

There are taxi stops in all the Barcelona cruise ship terminals, but there are often long lines to catch one. And you need to take into account that the taxi driver will charge you a supplement for pier pick up / drop off.

However, it’s a good option to get to the city center and back to the ship later. Just make sure to write down the name of your pier and ship on a card to show to the driver in case he doesn’t speak English. 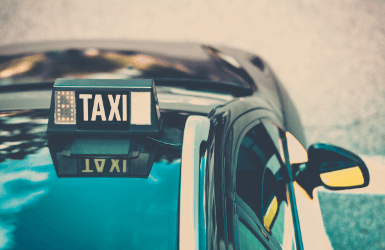 A private shore excursion is the easiest way to exit the Barcelona Cruise Port, and you will also take the most out of your short time in the city. Certainly it is more expensive if you are only two people, but if you are traveling with some more friends or family, the price becomes quite reasonable compared to joining one of the group tours offered by the ship.

Small groups move faster than large tours, so you’ll get see more things in the same amount of time!. Plus the itinerary can be customized to match your interests.

AND BONUS! Need to go from the Barcelona Cruise Port to Airport? ​

There is no direct public transportation connecting the pier with the Barcelona airport. You can read here where to take the bus or the train to the airport, but they are way too much trouble for cruisers. And a taxi from Barcelona cruise port to airport can easily cost you over €30. 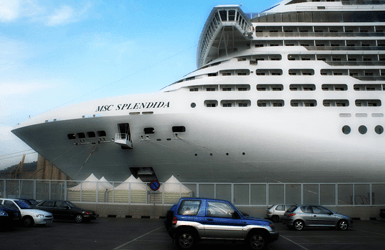 In most cases, cruiselines organize shuttles to the airport, but you might also want to consider booking a private transfer or even a city tour ending at the airport if you haven’t visited Barcelona yet and you have some time available for touring before your flight departs.

How are you planning to get into town from the Barcelona cruise port?​