In 1926 Mies van der Rohe surprised everyone with the very ahead of his time German pavilion for the World Fair of Barcelona. The 1930’s were a quite exciting time in Barcelona, with the Rationalism of the GATPAC group. But after the Spanish civil war the city entered a period of boredom that lasted a couple of decades. 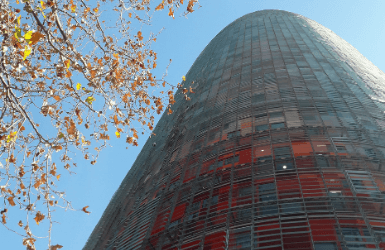 Only in the 1950’s some young local architects started to do interesting stuff again. But it wouldn’t be until the 1980’s, when the city prepared for the 1992 Olympics when the Barcelona architecture scene became truly exciting.

The city council was interested in bringing world-class architects to modernize Barcelona. Norman Foster with the Collserola Tower, Arata Isozaki with the Palau Sant Jordi covered stadium… But the momentum didn’t stop after the Games.

Barcelona had become the place where the leading architects of the world wanted to work. And there were plenty of opportunities to work, too. The plan to revitalize the Gran Via 2 area attracted Toyo Ito, Richard Rogers, David Chipperfield… In the other end of the city, the transformation of an old factory district into a new technological and media hub, the Poblenou 22@ project, had Jean Nouvel, Dominique Perrault and many promising Spanish architects. International events like the 2004 Forum of Cultures were another great excuse to attract talent.

As a result, Barcelona has become a must destination for any contemporary architecture lover. And while it’s impossible to list all the remarkable Barcelona modern buildings, in this post you’ll find some of the unmissable.

Where to see contemporary architecture in Barcelona:

If there’s a building that has changed the city skyline forever, that’s the AGBAR Tower. A glass needle standing by the busy traffic hub of Plaça de les Glories, that at night lits up with thousands of computer-controlled LED panels. Many compare it with the London Gherkin, completed just one year earlier by Norman Foster.

The AGBAR Tower is a unique office building with oval plan around a concrete core that concentrates elevators and services. It is built with sustainability in mind and it was Nouvel’s doorway into the city. Later on he also designed the nearby Parc Central del Poblenou, the Renaissance Fira Hotel and the refurbishment of the old beer brewery Fabrica Moritz.

Most of his works are in France, although he’s also done some private projects in the USA. His most celebrated design is the Louvre Abu Dhabi (United Arab Emirates).

Santiago Calatrava from Valencia (Spain) was just starting to get some international fame when he was called to design one of the two telecommunications antennas that would be needed for the Barcelona Olympics.

A couple of years earlier he had already been in Barcelona building a bridge over the railways in a charmless area of the city. The antenna, instead, gave him the opportunity to create something much more stylish and scenic. Some say it’s inspired in the Olympic torch, some say it’s an athlete vowing to receive a medal. In any case, both interpretations require a good deal of imagination to see it. The surprise comes when you discover it’s also a giant sundial that gives the time!

Ten years after the 1992 Olympics, the local politicians were starting to crave attention and success again. The 2004 Forum of Cultures was supposed to be the next level of old fashioned World Fairs, and it’d be a great opportunity to transform an impoverished area of Barcelona and to integrate it back to the city heartbeat.

Swiss architects Jacques Herzog and Pierre De Meuron where in charge of the main building of the event. It was meant to bring personality to an area surrounded by outcast facilities such as water treatment and incineration plants, electric power centrals… They achieved it with a multi-purpose triangular building in Klein blue that surprises in many aspects. It’s suspended over 17 columns. It’s got a few skylights that pierce the building from top to bottom. It’s supposed to have a water sheet covering the roof to attract marine birds…

Nowadays the building is home to the local Museum of Sciences. There’s no other works of Herzon & De Meuron in Barcelona, but you must have heard of them as the architects of the impressive Alliance Arena Stadium in Munich, the Beijing National Stadium that resembles a nest, or the M. H. de Young Memorial Museum in San Francisco.

The 1992 Olympics were also an opportunity to sanitize deteriorated districts. That was the case of the Raval, west of La Rambla, a tight maze of rundown streets that attracted crime and prostitution. The Museum of Contemporary Art of Barcelona, MACBA, was a key piece to transform the area after the demolition of a large number of alleys.

And while the museum collections have never been world-class, Richard Meier exceeded expectations with his building. Its transparent façade managed to stablish a subtle connection between the art world inside and the city life outside, sending the message that everyone is invited to participate in culture. Its simplicity, modernity and whiteness inspired hope for the future and a new beginning. Nowadays the building is fully integrated in the neighborhood and it’s become a meeting point for skateboarders as well as art lovers.

Born in Newark, Meier features several projects in New York and New Jersey, but his most acclaimed project is the Getty Center in L.A.

Ricardo Bofill is a well-known Barcelona architect that has worked primarily in Spain and France, but he features works in many other countries in the world (and cities including the mecca of contemporary architecture: Chicago).

In Barcelona he worked in the Airport and the waterfront, and he designed the National Theater of Catalonia next to Nouvel’s AGBAR Tower. So it wasn’t a surprise that he was chosen for this hotel at the end of the Barceloneta beach. The fishing origins of the neighborhood inspired him for the sail shape of the building. Although of course he was accused of copying the Burj Al Arab in Dubai, built 10 years earlier.

And that was not the only controversy around its construction. Its excessive closeness to the shore got it in legal problems. Its original height had to be shortened too, to meet the city regulations. And the neighbors complained that nevertheless the structure changed the local winds making navigation more difficult in the area. In any case, the W Hotel can be counted now as one of the trendiest hotels in town.

Could an alter ego of Antoni Gaudi have been born in Barcelona a century later? We’ll never know, but many believe Enric Miralles was called to be a contemporary Gaudi. Unfortunately he passed away at age 45, leaving his wife and also architect Benedetta Tagliabue to complete their joint projects.

They lived in the Old Town Barcelona when they heard the city council was planning the aggressive demolition of an entire neighborhood there with the excuse of remodeling the old Santa Caterina market. And they couldn’t let politicians and bureaucrats destroy the historical roots of the city.

They managed to convince them that there was a way to improve the area with minimal damage to the neighborhood layout. And that’s how the refurbishment of the Santa Caterina market brought color and fun to a greyish area with its undulating tiled roof.

Unfortunately, the discovery of ancient ruins under the market soil delayed the construction of the market for several years, and Miralles didn’t live long enough to see it completed. Other works of Miralles and Tagliabue in Barcelona are the Diagonal Mar Park and the Gas Natural headquarters. They are also known for the Scottish Parliament in Edinburgh.

Are you curious to know what is my favorite example of contemporary architecture in Barcelona?

Enric Geli is a brilliant Spanish architect that hasn’t received much attention even in Spain. His works are somehow small and humble, and he combines them with scenography designs for theater shows and art exhibits.

His opportunity to reach the international scene was when his project was chosen for the refurbishment of the New York Aquarium in Coney Island. Unfortunately in the end the project, that included a whale-shaped structure over the building, was deemed too costly and it was never undertaken.

But if there’s one example of Barcelona modern architecture that fascinates me, that’s his Mediatic building. Located in the heart of the new 22@ technological district, the building had to be flexible enough to receive a variety of local technology and media companies sponsored by the Barcelona City Council.

Enric Geli and his team achieved that with an ingenious free-plan cube of 4 different façades. The colder Northern façade concentrates elevators and facilities. The Eastern side with transparent glass receives the warmth and soft light of the early hours of the day, while the Western side fills up with a translucent gas to deem the sunrays  that might disturb the eyes of people working at their computers. And oh its Southern façade! A mind-blowing system of inflatable cushions controls the levels of sunlight and temperature inside the building. You must go check it out! (it’s a favorite stop in our Barcelona contemporary architecture tours!).

What are your favorite examples of Barcelona contemporary architecture?