Barcelona vs NYC, how they do compare?

Barcelona and New York, two vibrant cities with lots of things in come. We get lots of Newyorkers take our private tours of Barcelona. And many Barcelonans visit NYC every year. So if you’ve been to one city, are you likely to like the other? 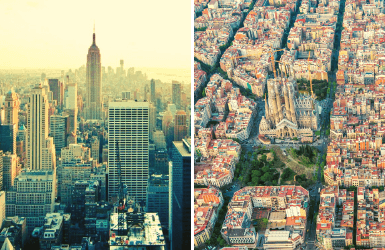 We want to help future visitors choose what city goes best with their travel style and interests. So in today’s post we compare both metropolis from its geography and practical characteristics and their unique sites. We’ll discuss architecture, food, museums, green areas… And you’ll also get to discover who the Statue of Liberty is married to! (quite a shocking choice, BTW).

These are the top differences and similarities of New York vs Barcelona:

The city of New York is divided in 5 boroughs, from which the island of  Manhattan is its core. NYC has a total surface of 784 km² (almost 195,000 acres), from which only 59 km² (a bit over 14,500 acres) belong to Manhattan. Barcelona city is almost twice as big as Manhattan – 100 km² (almost 25,000 acres), however the actual population of Barcelona vs Manhattan is pretty similar: around 1,6 million people. 8,4 million live in the total New York City area – that’s about one million more than the region of Catalonia, where Barcelona is.

The thing is that Barcelona has a more compact shape, while Manhattan is long and thin. As a result, the distances in NYC are longer than in Barcelona. For instance, walking from the Metropolitan Museum to Battery Gardens takes about 2 hours, while going from Park Guell to the Port is only one. Both cities have a convenient subway system to spare you the walks. The Barcelona one is more modern and cleaner. It’s also easier to understand since we don’t have express trains and each line has its own dedicated platform.

High and modernity define the architecture of New York. Vantage points at tall buildings such as the iconic Empire State or the newly built One World Trade Center are musts. Concrete, glass and straight lines are a common theme also for older buildings such as the Flat Iron or the Chrysler Building. 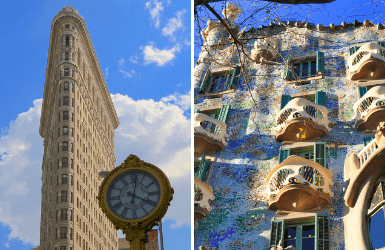 These two last buildings were built (1902 and 1928 respectively). And by then, in Barcelona Antoni Gaudi and his modernist peers were building colorful Art Nouveau buildings. Definitely not that tall: Barcelonans love sticking to a human size, so we only have a handful of tall buildings. And not really that tall: the highest buildings in Barcelona, the Mapfre Towers, only reach 154 m (505 ft). To give you an idea, that’s about half the Chrysler, and 2m (6 ft) less than the Seagram building in Park Avenue.

So if you love high buildings, NYC is your place to be. If you want to see an architecture that’s creative and unique, Barcelona should be your choice. You can see the views from many natural viewpoints anyways.

There’s no way Barcelona can beat New York when talking about museums. The Moma, the Metropolitan, the Museum of Natural History, the Whitney, the Solomon R. Guggenheim, the Frick Gallery… the list is never-ending, and the quality of the collections is overwhelming. 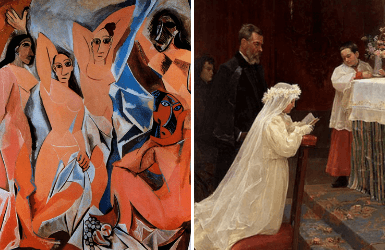 Barcelona can only compete in “niche markets”. Picasso’s Demoiselles d’Avignon is in the MOMA, but Barcelona has the most complete Picasso museum on the artist’s early works. A key visit to understand how Picasso became the master we all know.

The MOMA is also the house of Salvador Dali’s Persistance of Memory (the first painting where his soft clocks ever appeared). I need to say I was surprisingly disappointed to see how small the original is! I was used to the large tapestry replica hanging in the Dali Theater Museum, located just 1.5 hour ride North of Barcelona. And we have two more Dali museums in the area, both in unique buildings intimately related to the artist’s life.

The Moma also has a nice collection of Joan Miro works, but they dilute among the many other great surrealist artists displayed there. Barcelona being the hometown of the artist, he founded here the most important museum on his art. Nowhere else you’ll get to follow Miro’s evolution that well.

Finally, the Cloisters in Harlem can fascinate anyone that hasn’t been inside a real medieval monastery before. But when you’ve been to the real thing, it’s quite saddening to see how such beautiful pieces of architecture were dismantled from their original locations and moved away across the ocean… Come to Barcelona to walk around the cloisters of the Cathedral, the Santa Anna church, the Sant Pau monastery, the monastery of Pedralbes… or even take a day trip to spectacular Cistercian monasteries where the Royals were buried in the middle ages. A real trip back in time.

Central Park vs Ciutadella Park and the Hill of Montjuic

Central Park is probably the most famous urban park… in the world. It was created between 1857-1876 and occupies 843 acres (3.5 km²). It’s like an entire district by itself, with many landmarks to xplore. There’s water bodies, a zoo, plazas, memorials, a castle, a marionette theater, a carousel… 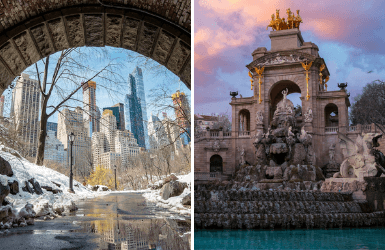 The Parc de la Ciutadella was built in 1877 on the former grounds of a citadel built to repress the city. Later on, in 1888 it hosted the Universal Fair of Barcelona. Many of the park landmarks date from that fair. There’s a monumental waterfall that would fit nicely in Versailles in Paris or Peterhof in Saint Petersburg (Russia). There’s one small lake were you can row a boat or feed the ducks. There’s the Catalan Parliament. There’s two vintage greenhouses. And there’s a zoo, 10 hectares (25 acres) larger than the one in Central Park. BTW, the Arch of Triumph is very close by (and did you know there’s an Arc de Triomphe in NYC too? It’s in Washington Square).

But the Ciutadella Park is way smaller than Central Park, of course. It’s only 31 hectares (76.5 acres), and almost half of it belongs to the Zoo. For something relatable to the size of Central Park we should look at the Hill of Montjuic in Barcelona. Its many green areas and gardens configure together what’s called the Park of Montjuic, 199 ha (492 acres). Still smaller than Central Park, but large enough to compare. There you’ll find structures from the 1929 World Fair, museums such as the MNAC or the Miro, two cable cars, a real castle (the Belvedere Castle in Central Park is just a folly and houses the park weather station), and many facilities of the 1992 Olympics.

New York City is a world-class destination for foodies. It features over 75 Michelin restaurants, 5 of them 3-stars, 14 2-stars. You’ll find there foods from all over the world, with Asian and Italian standing out thanks to communities like those in Little Italy and Chinatown. You can find street food everywhere, and pretty good most of the time. And people following special diets won’t have any problem finding vegetarian, vegan, gluten-free or even paleo or raw food! 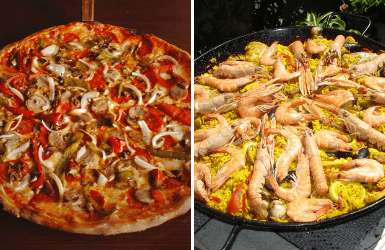 Instead, Barcelona is definitely a national food destination, but maybe not world-class yet. We have only 22 Michelin star restaurants, 2 3-stars, 5 2-stars and the rest 1-star. But you’ll find here restaurants run by the once best chef in the world: Ferran Adrià. His super-famous restaurant El Bulli closed in 2011. Now he owns several high end restaurants in Barcelona that he runs with his brother Albert. The Roca brothers, their heirs after El Bulli closed, have their Celler de Can Roca in Girona, merely 1 hour drive out of Barcelona. And you can taste their gelato brand Rocambolesc in a few selected stores in Barcelona.

But although Mexican, Peruvian and Asian cuisines have grown in the city, they are still considered something exotic. Barcelona sticks to tradition: Catalan and Spanish cooking including paella and tapas. But that’s not all, the list of recipes for meat, fish, grains and vegetables is never-ending. Even offal! A large variety of fresh produce that is the true gift of having a land which such a variety of landscapes.

Eating vegetarian has become relatively easy this last decade, and vegan is becoming trendy now. Gluten free is not impossible either. But not all restaurants understand the dangers of cross-contamination. Celiac be careful. As for other diets, they continue to be considered a stravaganza. Sticking to them on vacation in Barcelona will require either lots of research, or staying at an apartment and cooking.

AND BONUS! Now it's gossip time!

Stories of the Statue of Liberty and Christopher Columbus

Who is the most famous lady in Manhattan? Ms. Statue of Liberty, of course! And do we have a statue of any gentleman in Barcelona that has a space in the locals’ imaginary? Sure: Mr. Christopher Columbus, who stands at the top of a column at the beginning of las Ramblas, by the port. 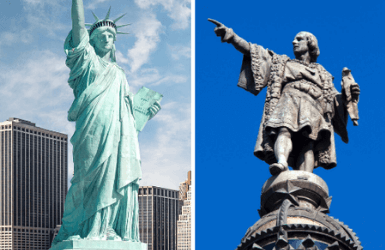 SEE BARCELONA WITH US

In 1986 the Spanish artist Antoni Miralda had the outlandish idea of getting the two of them married. He called it the “Honeymoon project” and he spent 6 years preparing it. It finally happened in Valentine’s Day in 1992, when he organized a LEGAL wedding in the Red Rock canyon (Nevada). The original idea was to do it in the Caesars Palace of Las Vegas, but the hotel refused to host the event…

I know, in our days Christopher Columbus is considered a simbol of the oppression of Native Americans. It sounds so disrespectful to “marry him” to Liberty. But we are talking about the XXth century. Then the concept of politically-correct didn’t exist yet,. Actually, the idea was celebrated as a symbol of “cultural exchange” between the two continents. Oh well, whatever.

By the way, there are two sculptures of Columbus in NYC: one in Columbus Circle and another in Central Park. And there is ONE replica of the Statue of Liberty in Barcelona, actually. Not as tall: it’s only 2m (6ft) tall and it’s been presiding the entrance to the Arus Public Library since its opening in 1895. It’s slightly different from the original too: the book she holds is titled “Anima Libertas”, instead of sporting the date of the US independence. That’s because the library was run by the local freemason logia. The bronze it’s made hasn’t rusted either, so it keeps its original dark color rather than looking sort of turquoise like the one in New York.

So... Barcelona vs New York City: What's your choice?