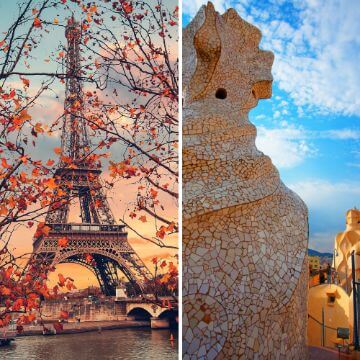 PARIS VS BARCELONA VACATION - WHAT TO TAKE INTO ACCOUNT​

Comparing Barcelona with Paris isn’t easy. Not many cities can shine when compared with the City of Lights. Both have obvious common points such as belonging to Southern Europe, being more than 2000 years old, a Roman past, beautiful medieval buildings … But while Paris is one of the great capitals of the world, Barcelona maintains a much smaller size.

The two cities are quite walkable. However, the distances in Paris are longer and you’ll end up using bus or subway more often in the French capital. And good to know: the Barcelona metro has more elevators and escalators than the one in Paris, where normal stairs are the norm.

Both cities have an ancient soul and young spirit. In both you can walk through centuries-old streets and attend modern cultural events. In both you will find a taste for art and antiques as well as for the most avant-garde design.

Another point to take into account is that Parisians are known to be haughty and unfriendly to tourists. Specially if you don’t speak good French. Instead, in Barcelona people are nice and can communicate in English better than you’ll think.

BARCELONA WITH YOUR PRIVATE GUIDE

Choosing between a Paris vs Barcelona vacation:

Water bodies often configure the personality of a city. Many international film directors have chosen the Seine and its surroundings to film. They made the world familiar with the Seine barges and the famous Bateaux Mouches passing monuments like Notre Dame. In Barcelona you can tour the maritime area instead of a river. There area also tourist boats, the “Golondrinas“, sailing around the Port and along the city’s coast.

During the twentieth century, France was the cradle of haute cuisine. In fact, the Michelin star system is a French creation. Chefs like Alain Ducasse or Joël Robuchon have positioned Paris as a gastronomic destination. However, Catalan chefs such as Ferran Adrià or Joan Roca are now consistently ranking among the best in the world.

We’ve discussed our favorite Michelin restaurants in Barcelona in this blog post. As for deserts, Bubo and La Pastisseria have nothing to envy to Michel Fauchon. And they are cheaper! And while Paris has some cool outdoor farmer markets, nothing beats the Boqueria – a world-class food haven.

TAKE A FOOD TOUR WITH US

The medieval heart of Paris is in the Île de la Cité and its most emblematic monument is the church of Notre Dame. The writter Victor Hugo and his character Quasimodo made its gargoyles an icon. In Barcelona the Old Town area is known as “Barri Gòtic” and comprises a good number of monuments to visit.

You’ll find there a beautiful Cathedral also from the middle ages. And the multicolored stained glasses of Santa Maria del mar in the Born district are a decent rival for the Sainte Chapelle.

TOUR THE GOTHIC QUARTER WITH US

Montmartre is another iconic area of Paris. Its Sacré Coeur topped by an open-armed Christ is another picture everyone wants. And Barcelona has its own version at the top of the Tibidabo mountain: the basilica del Sagrat Cor. And nearby, the Tibidabo amusement park features a vintage carousel, like the one in Montmartre.

Montmartre is also known for its artists painting portraits in Place du Tertre. And while there are no paintors in Tibidabo, you’ll find them gathering towards the end of La Rambla instead.

Picasso spent his teenage years in Barcelona, where he got his official art training. But in his early 20’s he moved to Paris and stayed in France. Towards the end of his life, Picasso donated a large number of pictures to the French government to pay off taxes. That was the origin of the Musée Picasso in Paris, a spectacular collection covering all periods. Instead, the Museu Picasso of Barcelona was started by Picasso’s old friends, and it focuses in the early and late periods of his life.

The Museum of National Art of Catalonia is no competition to the imposing Louvre. The Louvre houses unique masterpieces everyone wants to see at least once in their life. Like the Mona Lisa, or the Venus of Milo. There are no mass celebrities in the MNAC, although its collection of Romanesque frescoes is unbeatable. But if you love walking down alleys populated with art, the MNAC is a little paradise. Specially if you hate crowds.

VISIT THESE MUSEUMS WITH US

And what about the most iconic site of Barcelona vs Paris?

A urban legend says that Eiffel offered Barcelona to build the Eiffel Tower for the 1888 World Fair. The Barcelona City Council would have rejected the project, that was finally built for the Paris fair. The truth is that there’s no prove and the dates don’t match. If you can read Spanish, this article by a renowned historian debunks the myth. In any case, Eiffel fans will find a bridge designed by him in the nearby town of Girona.

Have you decided yet? What is your favorite city, Barcelona or Paris?