BEST BARCELONETA RESTAURANTS FOR A GREAT MEAL BY THE SEA

BARCELONETA BEACH RESTAURANTS THAT AREN’T A RIP OFF 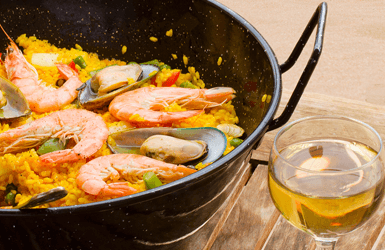 You’ve planned a day in the Barceloneta beach and hope to play by ear and eat lunch there. After all, the area is packed with restaurants and it won’t be difficult to find a place to eat. Isn’t it?

WRONG! So many of the restaurants in the area are now run by middle-eastern and Chinese clans that saw business in buying out the good old traditional paella restaurants by the port and the beach and keep the decoration but lower the quality of the food they serve. Because you know, tourists can’t tell the difference… But we locals do. And we are so sad about what’s happening…

And since I know that YOU would be disappointed if you ended up tricked into one of those cheese places, I’ve decided to share with you my favorite Barceloneta restaurants and spare you the trouble of figuring out where to eat after a day by the beach.

These are our favorite restaurants in Barceloneta :

A local’s favorite for family Sunday meals, also frequented by visitors. As you walk down the Port Vell marina towards the beach, you’ll see a low and long building with some colorful triangular flags over it: that’s the restaurant named after the fishermen district. If you are coming by car or taxi, you’ll have to go all the way around it, though, to be dropped off at the door. As you go in you’ll be received by one of the waitresses that will check your table (forget about arriving without a reservation: it’s always packed), then lead you upstairs into a welcoming venue decorated with sailor details. If possible, mention you wish a table at the balcony, to enjoy a meal with views over the marina. Food is great: a variety of tapas, paella, meats and fish, with enough vegetarian options as well, and enticing deserts (or you might prefer to walk to the nearby Vioko to get a gourmet gelato instead).

This restaurant opened over a hundred years ago as a humble place that served meals to the local fishermen, and it’s been so far fun by 4 generations of the same family, the Solé. Seaside cooking is their specialty, although what makes them famous are their rice dishes, said to be the best in Barcelona. It’s hard to choose one from their 8 rice dishes going from the traditional paella, to two versions of black rice made with squid ink, and a few arroz caldoso recipes (soupy rice). Fideuà (noodle paella) is also one of their star dishes. They offer 5 different recipes: two with squid ink, two with fish stock and a basic one. Remember that these dishes take long to cook so they should never be ordered as a single course meal: order it as a main course and then get a few tapas or appetizers to share and nible while you wait for your rice or noodles to arrive. 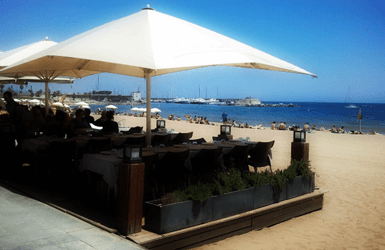 Barcelonans know the Restaurante Montolio by its nickname: “Can Maño” (the house of the guy from Aragon), and if you are looking for something authentic and informal, that’s where you need to go. A tiny fisherman tavern serving the freshest fish that arrives on the day. Fried or grilled with garlic and parsley – that’s the only to ways they serve their products. And yet, they taste like heaven. And they make you even happier when they bring you the check: it’s really cheap. Well, it’s a very simple place with formica tables without tablecloth where you pick your own cutlery from a tray and if you need bread they give you a loaf of bread from where you cut off as much as you wish. And the toilet isn’t as clean as you’d want it to be (avoid it if you can). So it really couldn’t be expensive, you are just paying for the freshest fish and seafood cooked in the most simple but effective way – no extras, no fuss. Not too convinced about checking it out? As soon as you try their chipirones (fried baby squid) and their grilled shrimp, you’ll understand why it’s making our list.

In 1962 a young couple from the countryside decided to move to Barcelona looking for a better future. They opened a humble bar in the Poblenou district that was named after her: Núria. 15 years later they moved to the Eixample district and specialized in sandwiches instead, and 20 years later encouraged by their children they found a bigger venue and started offering tapas and seafood, and soon they added rice and noodles to their menu. It was the beginning of Ca la Nuri, and they actually still run a restaurant there: Ca la Nuri Terra. In 2003 one of their kids found a venue at sea level in the Barceloneta district, and that was where they opened Platja Ca la Nuri, our favorite place to eat right by the beach and open all year around. They have lovely variety of tapas to share, and a selection of tapas that goes from the house paella, a caldoso soupy lobster rice, to a delicious veggie paella or a black rice with squid ink.

Would you rather eat IN the beach rather than BY the beach? A “chiringuito” is a Spanish beach bar that often looks like a bungalow. The kind of place where you’ll go for some chips and a drink after a beach day, or where you’ll buy ice cream for your kids. But some of them also offer meals: cheap tapas, paella or sandwiches. You would not expect to find there gourmet food… until chef Carles Abellán opened La Guingueta. In case you don’t recognize his name, he’s famous for the now permanently closed Comerç 24 restaurant where he got a Michelin star, and his still very popular Tapas 24 near Passeig de Gràcia.  The best chiringuito in Barcelona offers high quality tapas, appetizers and snacks that go well with a Catalan midday vermouth, salads and gourmet burgers and sandwiches signed by some of his chef friends, juices and smoothies (wheatgrass lovers: they have shots here!), cocktails (also alcohol-free) and 3 types of sangria: made with red wine, white wine or cava. An awesome beach plan.

AND BONUS! Here is where you can get a spectacular smoked rice from all the restaurants in Barceloneta:

It’s probably my favorite rice in Barcelona. As you enter the restaurant its looks don’t make you expect anything special: paper tablecloths and Basque decoration (since the owners are from the Basque Country). And the waiters have only started being nice to us now that my face has started being a bit familiar to them. But it doesn’t matter. They bring that paella covered in arugula leaves (I must admit that the first time I saw it I thought “wait a minute, that’s that all about?”, but it just adds the perfect bitter touch to a splendid vegetable paella). And with the first spoonful, that delicate smokey taste fills my mouth. I just can’t stop going back there a few times a year just for the smokey rice.

So what about you? Head to the comments below and tells us: Are you planning to visit any Barceloneta restaurants during your trip and which ones?