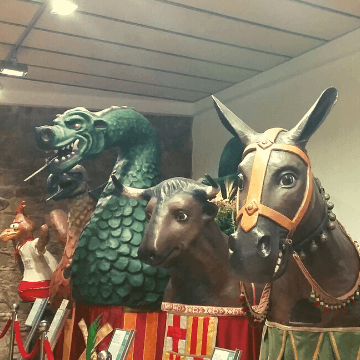 BEASTS IN TRADITIONAL PARADES IN BARCELONA

Parades of all kinds are huge in the Catalan festivals. We have large cardboard men and women (the Giants – Gegants) and short ones with big heads (Capgrossos), who parade along the streets to the sound of music. And we have a collection of real and fantasy animals that are also used in parades and occasionally particpate in Fire Run parades (Correfocs) as well.

They are an old tradition, and documents mention some of them as early as in the 1300’s, until unfortunately restrictive laws banned them to extinction in the 1700’s, until they were recovered by the locals in the 1990’s.

Giants go often in couples (a man and a woman) and often represent some relevant local character, and Capgrossos are more on the mockery and caricature side. But I find the Beasts, those real or fantasy animals I mentioned before, the most fascinating of all.

And since La Mercè Festival (one of the coolest festivals in the world, of course 😉 ) is around the corner and you are likely to see them in the streets, in today’s post I want to share with you a bit about their history. There are more animals in our Bestiari (Beast saga), but these are the most popular ones.
PRIVATE TOURS WITH BARCELONA LOCALS

These are our favorite La Mercè beasts:

Documented since the mid 1400’s although it doesn’t reach its current physiognomy until the 1600’s, this beast might be related to one of the Evangelists: Saint Mark, and it also danced in the occasion of Corpus Domini in the month of June. The Barcelona Lion is a stylish and not so scary best, also wearing a crown and flowers in its jaw.

It was the pet of the Bleachers Guild (although funnily enough, Saint Mark was the patron saint of shoe makers, instead). And now when it’s not out in the streets you’ll be able to see him at the Casa dels Entremesos, very close to the Cathedral of Saint Eulàlia, together with many other local beasts.

The Barcelona Ox is known to have received the Dux of Calabria in 1467 and the king Philip II of Spain in 1568. Probably also linked to another Evangelist, Saint Luc, it has short horns that make it look less dangerous than that of the Eagle and the Lion, and it doesn’t wear any crown but his head is often decorated with leaves and flowers.

It’s actually so docile that some sources link it to the Ox that was present in the Nativity, rather than Saint Luc. It was the pet of the Butchers Guild, and now it resides in the Casa dels Entremesos as well.

A symbol of power, considered the Queen of Birds, there are documents that mention her appearing in traditional celebrations as early as in the 1300’s. The Barcelona Eagle was even allowed to dance (that is, perform) inside churches on special occasions and specially on Corpus Domini. If that surprises you, just remember that the symbol of St. John the Evangelist is precisely an eagle. 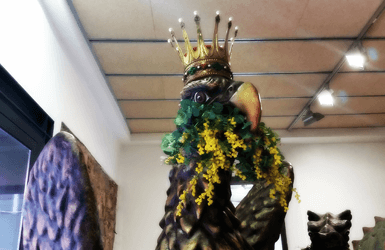 WALK AROUND THE OLDEST STREETS OF BARCELONA WITH US

The dance of the Eagle was one of the most important shows that could be offered to personalities visiting the city. Our Eagle is dark brown, with half risen wings in a menacing gesture, an open beak from where sometimes are hung flowers, and it wears a crown. When it’s not parading, you’ll see her resting in the patio of the Palau de la Virreina in La Rambla.

We hear about the Barcelona Mule for the first time in 1601 when it participated in the ceremony of canonization of Saint Ramon de Penyafort, a famous Catalan black friar. The mule is often seen carrying flowers in its mouth or wearing a flower necklace in popular parades, but it also likes to participate in fire runs where it spits fire and chases people (and it’s considered one of the “craziest” beasts of the fire run).

The Mule that is used in parades and fire runs nowadays is kept in the Casa dels Entremesos like most of its mates, but the original figure rests in the Church of Santa Maria del Pi.

The Víbria is a scary mythological animal that features bat wings, snake tail and woman breasts: she’s a lady dragon! Her name comes from the old Catalan word “vibre”, that means viper (“víbora”, in Spanish). She’s one of the oldest characters in the Barcelona Bestiari, as she’s documented since the 1300’s and she even performed in front of Queen Isabella of Castile.

It was the pet of the Smiths Guild, and it now also lives in the Casa dels Entremesos. And beside the Barcelona Víbria, the Poblenou district also owns their own Víbria del Poblenou.

AND BONUS! Here is the most powerful of all the monsters in the traditional parade of La Merce?

Or should we speak about “dragons” in plural, as there isn’t one Barcelona Dragon but many dragons associated to different districts and neighborhoods in the city. But in any case, the oldest and most famous is the Dragon of Ciutat Vella, in the Old Town. It performs mostly in fire runs spitting fire from its mouth and chasing people, but it also participates in quieter parades, where he carries a bouquet of red carnations in his mouth (a less dangerous representation of the fire it usually spits).

The Dragon is heard to be active already in the 1400’s, but it never seemed to be linked to any guild nor Parrish church, so when the character was recovered in 1987 (one of the first to reappear in our traditional parades), it was christened as the Dragon of Ciutat Vella, the historical district of Barcelona.

As I mentioned before, there are a few other Dragons in Barcelona, and there is one more that is worth mentioning: the Gaudiamus Dragon, inspired in the salamander-looking dragon of Park Güell by Gaudi (but this one spits dragon, not water!).

Did you know there were so many La Mercè beasts and are you planning to see them while in Barcelona?