Catalan And Spanish Mushrooms To Try This Fall 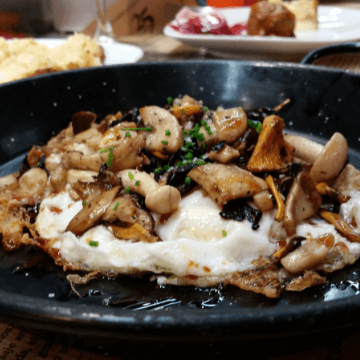 Mushrooms are huge in Barcelona and Catalonia and other humid areas from the North of Spain, while drier areas such as Castile almost despise them and limit their consumption one of the most popular Spanish mushroom tapas: “champinones al ajillo” (sauteed mushrooms with garlic and parsley).

But in our area, when the season starts with the first showers of the Fall, locals flock to the mountains to hunt them. There’s even a local TV show called “Caçadors de Bolets” (mushroom hunters) that is very popular.

Many families train their kids to identify which ones are edible and which aren’t from the varieties that they’ll more often find in their area. And those who aren’t in the know… just head to the closest farmers market to buy a basket of them! And restaurants start including them in lots of their menus as well. So it’s a great opportunity to try varieties you might never have heard of (or just seen in cookbooks).

Are you curious about mushrooms? Today we’ll share with you Spanish mushrooms varieties you definitely need to trip in your next autumn trip to Barcelona. NOTE: Names are in Catalan, as you’ll most commonly find them in markets and restaurants in Barcelona.
SEE MUSHROOMS DURING OUR FALL PRIVATE FOOD TOURS

These are the Top-5 Spanish and Catalan mushrooms:

The Lactarius sanguifluus (bloody milkcaps), called níscalo in Spanish or rovelló in Catalan is the one mushroom that any local mushroom hunter wants to find. They grow mostly on Mediterranean pine tree woods, often making circles. When hunting them, it’s important not to confuse it with the yellowdrop milkcaps that releases a sort of white milk when cut (instead of the red or green one of rovellons).

There are other similar mushrooms that are edible and safe, such as the pinatell (saffron milk cap) that is widely present in European woods but is not as flavorful. When they are small, their ends are concave but as they grow larger they turn up to look like funnels: the small ones are actually the most appreciated and expensive. While they can be used in many recipes, you’ll best enjoy them grilled with some parsley and minced garlic sprinkled on them. Those at El Quim de la Boqueria are expensive but so good!

The Craterellus cornucopioides (black chantarelle) are called trompeta de la muerte in Spanish (death trumpets) for its horn-like shape and its black or dark grey color. But don’t be fooled: their color is their only connection to death: they are perfectly edible and actually it’s impossible to confuse them with other poisonous mushrooms as they are the only ones that fit their description (easy for newbie mushroom hunters!).

They grow in wet oak and ash woods, often in circles, and they are often sun-dried or grounded to powder to be used in a variety of recipes – but we love them in rices and pasta dishes. They have a scent that reminds you of truffles and prunes, and a meaty texture.

The Cantharellus cibarius (Chanterelle) are called rebozuelo in Spanish, and they are very appreciated yellow mushrooms that grows Spring through Fall (rain permitting) in pine tree, oak, ash, chestnut and beech woods, and it won’t get maggoty. It can be eaten raw or cooked, and it is often sun-dried for easy preservation. 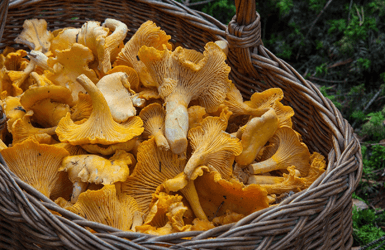 TASTE MUSHROOMS IN OUR TAPAS TOURS THIS FALL

While some other edible fungi of the same family look similar to it, mushroom hunters must be careful not to confuse it with the toxic Omphalotus olearius that grow on wood stumps or in the base of trunks (too bad we don’t go mushroom hunting at night: it’d be easy to identify them as omphalotus glow slightly in the dark, which is why in English they are called jack-o’-lanterns). They go nicely with meats and poultry, sauté with beans or added to scrambled eggs, besides on pasta and rice.

The Calocybe gambosa (Saint George’s mushrooms) are called perro chico or seta de primavera in Spanish is a white fungi that grows in Spring (contrarily to the majority of the other varieties, that grow in the Fall) in prairies among the grass.

We sundry it and use it for one of our most typical recipes: Fricandó, a Catalan style beef stew with mushrooms that you’ll find in the cold weather in most restaurants serving Catalan cuisine. It can also be used in rice and pasta dishes.

The Pleurotus eryngii are called seta de cardo in Spanish and they are a white to grey or brownish mushroom is hard to find wild in the Catalonia but it’s surprisingly popular in Castilia (where I told you they don’t do mushrooms much).

We do however buy it often at the market for its meaty texture and it’s often served as a tapa grilled and sprinkled with garlic and parsley (we like the ones they serve at Cerveseria Catalana and its sister restaurants Ciudad Condal and Vinitus). It’s also becoming popular to grow it at home on prepared trunks: you only have to leave them in the shade and water it until it blooms.

AND BONUS! Listen to this story about Antoni Gaudi, the architect of Sagrada Familia, and some local (naughty) mushrooms:

Rumor has it that Gaudi used to eat Amanita Muscaria (reig bord) that has hallucinogens effects to get inspiration for his works – even if he later would need to be really sober for all the very complex calculations that his buildings required. And the thing is that one of the entrance pavilions of Park Güell really looks like an Amanita Muscaria (the typical red mushroom with white spots from fairy tales).

YOUR OWN PRIVATE TOUR OF PARK GUELL

The top of the other entrance pavilion might also be inspired in a local (but quite rare) red mushroom that can still be occasionally found in the forestry area of the Park: the Clathrus ruber or basket stinkhorn, which is edible on its egg stage but becomes poisonous as it grows.

What’s your favorite Spanish mushroom and how have you eaten it?