In Catalan, a “escudella” is a traditional clay dish where soup and stews are served. In the old times when ceramic dishes were only accessible to the high society and plastic didn’t exist yet, that’s what everyone used to eat. For the majority of the population cooking elaborated recipes wasn’t a priority (they didn’t have access to fancy ingredients anyway). And soon the name of the plate started being used to designate what was served on them. 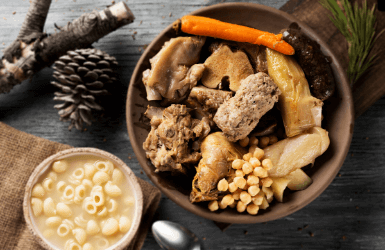 It seems to be the oldest documented dish in Europe, already mentioned by a Franciscan monk in the 1400’s in one of his books. According to him, that’s what Catalans ate everyday. Families would throw veggies from the season and bones and some meats into the pot and boil everything together. Depending on what was available, the dish would be richer or thinner.

The ingredients are eaten as main course after the soup. Hence the full name of the dish: “escudella i carn d’olla” (soup and pot meat). Or if they are cut in smaller chunks and served together, it is called an “escudella barrejada” (mixed soup). That used to be a poorer version of the meal, as it usually meant there wasn’t enough stuff for seconds…

But on special festivities the number of ingredients grows. Ideally the soup should incorporate 4 different meats: pork, chicken, veal and lamb. Now it also includes a large type of curbed and striped pasta called “galets”. This pasta can even be stuffed with minced meat, for an extra rich soup.

On Christmas day, December 25, the Catalan families gather around the table hungry for their escudella catalana. First we’ll relish on the rich broth with galets. Then the vegetables, legumes and meats will be displayed on large trays and each guest will choose the foods of their likes. It might not sound as fancy and elegant as a seafood platter, but the sharing and socializing makes eating escudella for Christmas a cheerful party.

This is how to make Escudella de Nadal

The escudella recipe is simple, but it takes time to make. And it requires many ingredients. After all, you are preparing a farmer’s Christmas banquet! The ingredients list is also very flexible: don’t have one item? Substitute by something similar or just skip it. But the more ingredients, the richer it’ll be.

Making it from scratch can take a whole morning. Even more if you prefer to use dry chickpeas and soak them overnight etc etc etc. That’s why I went for canned chickpeas in the first place. But Christmas Day is a busy day: you’ll want to prepare the broth the day before. This way on Christmas day you’ll only need to cook the pasta and will be free to take care of your guests. Plus letting the ingredients seat on the broth overnight will allowed them to release even more flavor into the broth. That’s a bonus of doing it the day before!

MEATS FOR THE BROTH

VEGGIES FOR THE BROTH

FOR THE PILOTA MEATBALL

Remove the skin of the poultry. Wash the rest of the meats, except the sausages that you’ll set aside for later. If you will be using lard, make it a small ball and roll it around flour.

Put meats (except sausages and chorizo) and optional lard in a very large pot or pressure cooker, with 3 to 5 liters (100 to 170 oz) of water depending on the amount of ingredients and the size of the pot. If you are using a pressure cooker, do not get over the maximum water level indicated for it (usually 2/3 of its capacity). 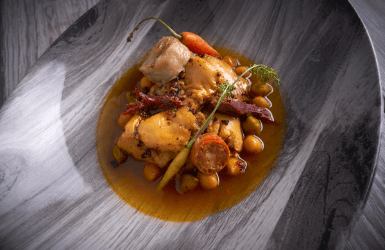 Add some salt to taste. Get to boiling point. Let it simmer over a low heat. During the first 15 minutes or so, the meat will produce foam. Remove with a skimmer until all impurities are gone.

At this point, if you are using a pressure cooker, you can put the lid and close as required. Wait until the second pressure mark appears (or the valve starts to jiggle and steam comes out, depending on the cooker model). Then turn down the heat and let it cook for some 20 minutes. Then turn the heat off and wait until it’s safe to open the pressure cooker.

“Pilota” is a large oblong meatball that is a key element of Christmas escudella catalana. It’s the size and shape of a large potato, to give you an idea. You can get it ready while the meats get cooked.

With your hands, mix minced pork and ground beef well. Whisk the egg and add it to the meat. Add the minced garlic, salt, pepper, the dash of cinnamon and optional wine dollop. If you are adding pine nuts, roast them a bit on a pan without oil before throwing them into the mix.

Warm up a bit the milk or cream, and mix it with the bread with the help of a food processor or a hand mixer. Add the parsley. Pour into the meat mix and continue massaging it with your hands until it all integrates. Then form the pilota meatballs with it and roll them in flour until they are completely covered. Set aside.

ALTERNATIVE: You might want to stuff the galets pasta with the pilota mix using a pipping bag, instead of making the meatballs. It’s a more elegant but more time consuming way of serving it. This is done before boiling the pasta, and the meat that sticks from both ends of each galet needs to be coated with flour before boiling.

Peel the potatoes. Cut the cabbage in 3 slices. Remove green tops and roots from the leek. If you are using onion, remove skin and roots, too. If the celery stalk is too long, cut it in half so it fits in the pot. If you are using squash, remove the skin. Wash the rest of the veggies. 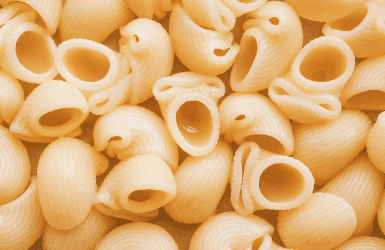 Add all the veggies, chickpeas (better inside a mesh bag), sausages, pilota meatballs and optional beans to the pot, on top of the meats. If you are using chorizo, you’ll want to boil it aside so the broth doesn’t get overly red. If you are using a pressure cooker, it’ll take 10 minutes once it reaches the second pressure mark or the valve starts spinning. If you are using a pot, you’ll have to let it simmer for 45 minutes.

If you are preparing the broth ahead, keep all ingredients in the broth overnight. Ideally in the fridge, but if there’s not enough space (ehem), then any clean cool place should be fine.

The proportion of broth to pasta is 5 to 1 (5 cups of broth for every cup of pasta). Add salt to taste. Heat the broth to boiling point. If you’ll be stuffing the galets, they’ll need 20 minutes for the meat to be cooked. Otherwise, just follow the pasta package directions to know how long it takes to get cooked (it’s usually 7 to 20 minutes, depending on the brand and their size).

You’ll be serving the pasta immediately after cooking it. In the meantime, you can start heating the pot again. The meats and veggies need to be warm when served. Strain them before displaying on platters. There’ll be left-over broth: use it for other dishes later or give away to your guests in air-tight containers.

Escudella de Nadal is served in two rounds. The first round is the galets soup. It must be warm at “soup temperature”. Bring the pot to the table and serve the pasta soup to each guest. That’s your first course. In my family we love to have some grated cheese available to sprinkle over the soup. 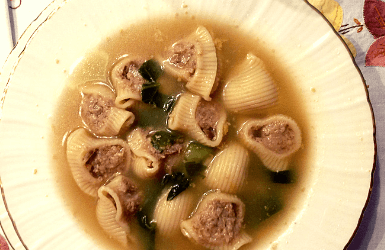 SEE ALL OUR FOOD TOURS

The proportion of broth to pasta is 5 to 1 (5 cups of broth for every cup of pasta). Heat the broth to boiling point. If you’ll be stuffing the galets, they’ll need 20 minutes for the meat to be cooked. Otherwise, just follow the pasta package directions to know how long it takes to get cooked (it’s usually 7 to 12 minutes, depending on the brand).

You’ll be serving the pasta immediately after cooking it. In the meantime, you can start heating the pot again. The meats and veggies need to be warm when served. Strain them before displaying on platters. There’ll be left-over broth: use it for other dishes later or give away to your guests in air-tight containers.

WHAT ABOUT LEFT-OVERS? You cooked loads of food, and people might not be able to finish everything up… That’s why on the next day, December 26 – St. Steven’s Day or Boxing day, in Catalonia there’s a second family gathering to eat cannelloni (made of carn d’olla left overs, of course!). Or you can make croquettes. Or lasagna.

Will you be doing this Escudella Catalana recipe for Christmas?