DID YOU KNOW THAT PASTA IN CATALONIA IS REALLY POPULAR? 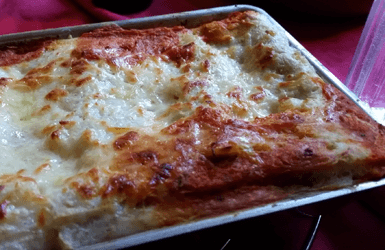 Catalonia and Italy were very connected in the middle ages, so it is not strange that their cuisine had a strong influence in our own way of cooking. And while we don’t have the impressive variety of sauces and shapes you’ll find in Italy, pasta is present in our families’ everyday cooking, we await it in special celebrations, and order it often at restaurants.

Pasta in Catalonia has an earthier flavor that reminds you of the farmhouses, the forests and the mountain, often tied to meat and veggie ingredients, and it was also soon adopted by the bourgeoisy in the city for whom were developed more elaborated recipes. Discover today what are our favorite traditional Catalan dishes made with pasta.

These are our favorite pasta dishes:

Cannelloni arrived to Barcelona through some Italian families at the end of the 1800’s, when Rome was the center of the art world (right before Paris took its place) and in our city Modernism was soon going to appear. They were adapted to the local taste, and soon we started to use roasted meat instead of minced meat like in Italy. Pasta was also cooked a bit longer, not al dente. They were served covered in bechamel sauce, and occasionally with tomato sauce. Since it takes long to cook them, they are not an everyday dish (although you can order them at restaurants, of course), but for special occasions such as Sunday and specially Boxing Day (December 26), where it is said that cannelloni were made using the left overs of the big Christmas meal the day before. Nowadays you’ll also often find them stuffed with spinach, pine nuts and raisins, or mushrooms, or tuna fish.

Galets are a type of pasta that looks like short and curved macaroni. Actually, it is thought that originally they were macaroni cut in halves so they were easier to catch with a spoon. Nowadays they come in different sizes and are still eaten as a soup, often with parmigiano or another cheese that melts well sprinkled on top. It’s an easy dish to cook at home, which is why it has become a child’s favorite for the long winter nights. It also has a place in the local festivities, when the recipe will become much more elaborated – but I’ll speak about that later. 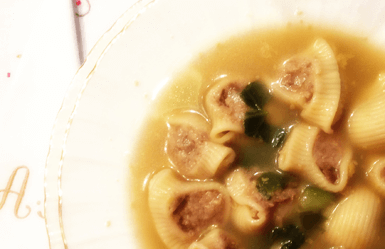 If we’ve been discussing Italy so far, I must correct myself now and tell you about the Muslims in the Middle Ages. It was them who first brought pasta to Spain in the shape of noodles, and they are already mentioned in the Llibre de Sent Soví, the oldest Catalan cooking book from 1324. As opposed as in Italy where pasta is boiled aside in water, here we cook the noodles directly with the juices of the rest of the ingredients inside a clay pot (hence the name, a la cassola – in the pot). We first brown pork chops and sausages cut in small bits in olive oil, then add grated tomato, onion, garlic and parsley. When it starts caramelizing and releasing its juices, it’s time to add the noodles (fideus) and stir so they get all impregnated. We’ll then add some boiling water or broth and let simmer for as long as the pasta needs to be cooked (again, not al dente but a bit more done). The dish is served a bit soupy, and it’s great for a cold winter lunch. Oh, and the noodles must be thick, and if possible, holed.

This recipe might remind you of penne bolognese. It’s a very popular family dish that children love, and it’s often served in traditional restaurants. The pasta is boiled aside in hot water, then mixed with a sauce made of mince meat (veal or pork, although since the recipe slightly changes in every home, other might use bits of sausage, ham or even chorizo), grated tomato, onion, garlic, olive oil and some water. They can be served like this, or cover in grated cheese and gratin in the oven (that was my favorite way when I was a child!).

This plate is the oldest soup dish documented in Europe, as it is mentioned in a book of the 1300’s by the writer Francesc Eiximenis, when it was a dish people will eat everyday with whatever was available. Little by little, though, it evolved to be a festive recipe: Christmas day was a day to celebrate with the family, get all the food available in the house and prepare a feast. The most earthy broth was made with beans and veggies, and lots of meat: chicken, a variety of sausages, meatballs, bacon and chunks of meat. The broth was served as a soup with galets pasta – larger than the ones we use for daily meals, and sometimes stuffed with minced meat or accompanied of meatballs. That was the “escudella” part of the dish (escudella being a traditional clay dish for soups). Then came the Carn d’Olla (pot meat): all the leftovers of making the broth served on a large platter from where each person would choose their favorite legumes, veggies and meats. We still serve it as main course on Christmas Day – and our foreign guests are often surprised (and maybe a bit disappointed) to see that we choose such an earthy dish to celebrate, rather than more elegant recipes and ingredients. But that’s the way we are! BTW, it’s possible to find escudella i carn d’olla in traditional Catalan restaurants even if it’s not Christmas day.

AND BONUS! Discover the pasta version of paella: 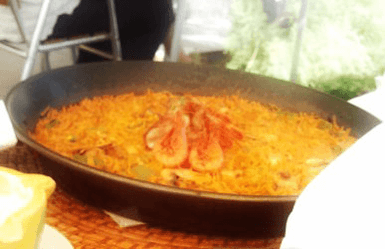 If “fideu” means noodle in Catalan, a “fideuà” (or fideuada) means… a lot of noodles! But first of all, let’s be honest: the original fideuà is not Catalan but from Gandía (Valencia). The story says that the captain of a fishermen boat loved rice so much that every time they ate at sea he’ll eat the whole paella and leave nothing for his sailors. So once the ship cook decided to use noodles instead of rice, and see if this way there’ll be something left for the crew. It worked, and the dish became famous. Now I must also say that the way we make fideuà in Catalonia is slightly diferent from the one in Valencia: while there they use thicker and sometimes holed noodles and a variety of ingredients that makes it quite similar to a paella with noodles instead of rice, here we use really thin noodles that tend to rise when baked in the oven, so they become toasted and brown at the top, but soft and juicy at the bottom.

So what about you? Head to the comments below and tells us: Have you ever tried any of these Catalan pasta dishes and did you like it?