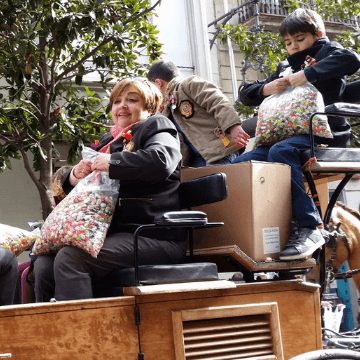 The year in Barcelona is full of traditions, many of them of religious root that have evolve into something festive and popular. This week we are celebrating one of the: the Festival of St. Medir (Saint Emeterius). It’s maybe not something celebrated generally around the city, but a very important celebration for some traditional neighborhoods.

In the one where I was born, Sarrià, it was a big thing and I keep happy memories of those days when in the morning we attended the parade with the school, then in the evening we went again with my family. This is why I do think it’s something that is worth experiencing if you are here, as it’ll put you in touch with the real local life. Let me share it with you today!
PRIVATE GUIDES BORN & RAISED IN BARCELONA

These are the basics to enjoy Sant Medir in Barcelona like a local:

Who was Sant Medir?

According to the legend, Medir was a farmer that lived in the time of the Roman emperor Dioclecian, who ordered cruel prosecutions of the Christians. In Barcelona, the bishop Sever had to run away across the Collserola mountains. On his way to the town of Egara, very close where now is the town of Sant Cugat, he crossed Medir when he was busy planting fava beans. The bishop explained him that he was being chased but that he should always tell the truth if the Romans arrived and asked Medir if he had seen the bishop.

Sure enough, little after the bishop left, a patrol arrived and Medir was questioned. He answered that he had indeed seen him passing when he was planting those beans. The Romans looked at the orchard and… miracle! The bean plants had fully grown and were starting to bloom! And so the Romans thought the bishop had been there really long ago and stopped searching for him.

Or maybe not? Another version of the story says the Romans felt cheated and after eventually capturing the bishop they came back for poor Medir and arrested him for being a liar, and both perished in martyrdom. Ouch!

The hermitage of St. Medir

St. Medir’s legend is at least based in some truth. While Barcelona faces the Mediterranean sea, its back is protected by a range of hills: the Collserola mountains. The Romans built a road crossing them to connect with Egara, then an important city nowadays called Terrassa.

After descending the Collserola hills one enters a fertile valley, and the first village that the road crosses was called Castrum Octavianum – the current Sant Cugat del Vallès (funny how the latin names of the towns have changed with the centuries, uh?). In the woods of Collserola by the hiking trail that still now takes you to St. Cugat, you’ll find this Romanesque little chapel with a picturesque 2-bell belltower, mentioned in documents already in 932 as being property and responsibility of the Monastery of Sant Cugat.

The building was refurbished in the 1400’s, and restored after it burned during the Spanish Civil War in 1936. Nowadays there’s a group of friends that call themselves Penya Regalessia (Licorice club), volunteer to maintain the chapel and its surrounding area.

The origins of the festival

In 1828 a baker from Gracia (then an independent village, now a district of Barcelona) that was often sick, made a promise to Sant Medir, his favorite saint, every March 3rd – the day of the Saint, he’d ride a horse in pilgrimage to the hermitage of St. Medir playing a bagpipe and announcing to everyone that would listen why he was doing it.

DID YOU KNOW WE HAVE A CANDY TOUR?

Two years later he had surely healed and he kept to his promise going on his first pilgrimage. The next year, he was joined by a group of friends and relatives, and every year more and more people joined, until they eventually got organized in pilgrimage teams (“colles”, in Catalan). Twenty years later, the promise of a devout had become a popular local celebration.

What are the “colles”?

In Catalan, a “colla” is a group of friends, but it’s also used for some types of teams and clubs: soccer team supporters, human tower teams, fire runners… as well as those organizing pilgrimages and parades for Sant Medir and other traditional festivals.

The oldest Sant Medir colla was founded in 1861: L’Antiga de Sant Medir, followed by the Agrupació Bonanova in 1887. The youngest colla is the Benplantats, refounded in 2016 when a group of players and supporters of the Gracia soccer team CE Europa decided to recover a the colla their soccer team had already had in 1926.

Some colles own their own headquarters where they organize their activities, while some other meet in local bars or cafés. There’s about 25 of them, bigger or smaller, and some of them have a music band, some have horses, some have vintage carriages, some use rickety trucks for the parades. They are organized in a Federation, what helps them get more visibility and help from the local authorities.

And now the fun part of the tradition: the parades! Twice a day, morning and evening, the Colles get on the streets each one on their own carefully planned itineraries around Gràcia and Sarrià. They march on their horses, carriages and trucks, throwing candy to the audience.

The morning parades are usually quieter and you’ll often see school kids with their teachers lining up the streets waiting for the parades to pass by. The evening parades are busier with parents and kids, and “dangerous” grannies ready to go over your dead body to get candy for their grandchildren (stay away from them!).

TIP: some locals use open umbrellas upside-down to catch more candy before they reach the floor. ONE MORE TIP: If you are visiting Barcelona on the weekend after March 3 you can still attend a last parade: the neighborhood of La Bordeta in the district of Sants celebrates Sant Medir with another parade on Sunday in the morning, ending with mass around noon.

AND BONUS! Why are they giving away candy? What does it have to do with Saint Medir?

Candy instead of fava beans

I know, it’s fun to get candy in the parade but… what’s the origin of the tradition? To understand it we need to go back to the legend of Sant Medir. Do you remember he was planting fava beans when he saw the bishop run away? Well… throwing beans onto people wouldn’t be much fun… Although it seems that the baker who started the first pilgrimage did so, as a tribute to the saint.

Fortunately, with the years beans were substituted by candy – now gluten-free so even celiac kids can enjoy the sweetest festival of the year. Anyway beans are still present in the festival: you’ll often see the paraders sporting a pin with a bean on it, in honor of the saint.

Would you like to attend a Sant Medir parade? Or are you more a pilgrimage/hiking person?