PLANNING TO ATTEND THE FIRE RUN? 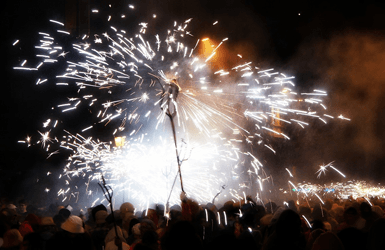 The Correfoc is a popular Catalan tradition consisting of a parade of infernal characters that chase people with fireworks. It is usually celebrated afterdark (when the effect of the fireworks is more striking), and arises a lot of emotions in the participants that range from (controlled) danger to fun and fascination.

Most major festivals of Catalan villages include one in their program, and the Fire Run of La Merce Festival is the largest in the country. We strongly encourage you to check it out, but there are a few things you need to know beforehand, to understand what’s going on and how to participate safely. That’s what you’ll learn in today’s post.

5 things you need to know about the Barcelona Firerun:

People belonging to Diables teams dress up as devils for the parade. Each group of Diables has its own traditional costume and it’s usually made of sackcloth or thick cotton, as both are fireproof (it doesn’t mean they don’t burn, but they are more resistant). They usually wear a cape to protect themselves and a pitchfork full of firecrackers. You’ll recognize them as they are in the middle of the street running with the firecrackers lit sending sparks to everybody that is in their way. A set of sparks lasts lit for a few seconds, then they go back to a chart to get more and start again. 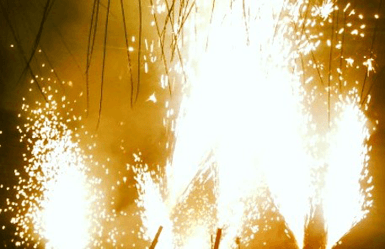 Each Diables team “breeds” some kind of big monster, a scary cardboard mithological animal, that is carried by people hidden inside its structure. They also carry firecrackers sending sparks, as well and despiste being slower than a Diable, the monsters usually carry more fire than Diables. The Barcelona Parade includes many of them, and you’ll quickly recognize the Gaudiamus, from the group of Malèfica del Coll, that is inspired in the dragon fountain of Park Güell.

The Diables and the Bestiari are accompanied by a group of drummers. When the fire starts, the drummers start playing as well, because they have a safety function: their sound keeps the devils aware of the position of the chart where the unused fireworks are kept, so they can stay away from it (a spark entering the fireworks chart could be fatal). Therefore, the area around the drummers becomes a safety zone for people who wants to follow the fire run but don’t want to approach the sparks.

The itinerary of the Correfoc Barcelona starts in the front of the Cathedral, with the spectacular “Porta de l’Infern” show (Hell’s Gate), where the devils are called by the Beast calls the Devils out of Hell so the parade can start. Dozens of Diables teams are invited to join the Correfoc every year, and they parade down Via Laietana to the Port, where they are “sent back to hell”. There is also a Children Firerun taking place earlier: it’s not as spectacular as the adults’ one, but it’s so cute seeing kids wearing devil costumes with little pitchforks and firecrackers for kids.

This deeply rooted tradition starts back in the XIV century (it was first documented in 1150, but it wasn’t that popular yet), as a performance represented to entertain the nobility in the middle ages. The devils and the angels were represented as well during the Corpus Christi festivities (ecclesiastic processions) to make the procession more spectacular, and with the firecrackers noise they’d get people step back and make room for the procession. The tradition has evolved throughout the centuries to become this wonderful fire parade.

AND BONUS! Make sure to dress safely to avoid serious burns: 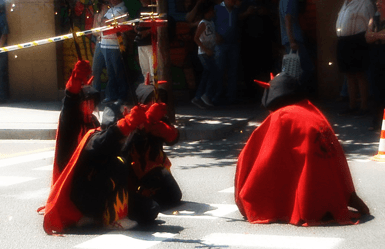 If you want to participate in the fire run, or at least being near enough to touch the fire, here are some safety tips:

So what about you? Head to the comments below and tells us: would you join a firerun?

2 thoughts on “CORREFOC – THE WILDEST TRADITION OF LA MERCE FESTIVAL”