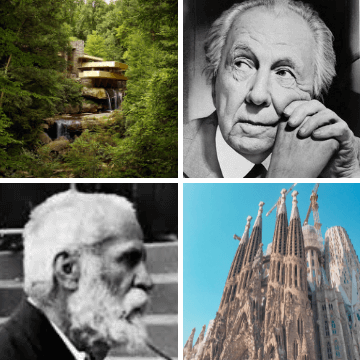 Two geniuses side by side

I had wanted to write this post for a long time. I’ve been giving Gaudi tours for years, and inevitably my American guests compare him with Frank Lloyd Wright. Gaudi is the most famous architect in Barcelona, and Frank Lloyd Wright is the most important architect in the USA.
So I was curious to do some more research on Lloyd Wright, who he was and what he did. And that way understand how he is connected with Antoni Gaudi and his works. Today I'm sharing with you my conclusions. I hope you find it as fascinating as I do!
CHECK OUR BARCELONA GAUDI TOUR

Antoni Gaudi was older: he was born in 1952 and died in 1926, in Spain. Frank Lloyd Wright enjoyed a longer life, between 1867 and 1959, in the US. Both were born in a rural area, Gaudi in the Tarragona fields and Wright in Wisconsin, but both moved the city to work as architects. Antoni Gaudi came to Barcelona, and Wright headed to Chicago.

It was the perfect time for both, with plenty of job opportunities for young architects. In Barcelona, the medieval walls had been knocked down, and a new city was being built around the old town: the Eixample District. Chicago was still in full reconstruction after the devastation caused by the Great Chicago Fire some years earlier.

It seems Frank Lloyd Wright’s mother always encouraged his passion for architecture, from decorating his nursery with architecture engravings to getting him building blocks to play. Instead, Antoni Gaudi’s family where quite surprised when their kid asked them to send him to Architecture School. His father was a blacksmith that made boilers and kitchen pots, and Gaudi said he learned about volume by watching him work metal into convex and concave shapes.

Antoni Gaudi never married: it is said he was so heartbroken after being rejected in his youth, that he never tried anymore. He took care of his orphan niece until she died at a still young age. Instead, Wright married three times and had four sons, three daughters and adopted the daughter of her third wife.

There was one more important woman in his live that he never married due to tragic circumstances. His first wife, which he had abandoned, wouldn’t grant him divorce. Then one day a disturbed servant set Wright’s home in fire and killed seven people with an ax, including the architect’s mistress.

Modernism is the Spanish version of Art Nouveau. A professor of Gaudi in college, Domenech i Muntaner, was the leader of the movement, bringing it to Barcelona, adopting the philosophy of nature inspiration and use of a variety of materials, and choosing the Gothic style as the main historical influence as opposed to the French Baroque.
BARCELONA MODERNISM WALKING TOUR

Gaudi’s works are framed within Modernism, but we can’t consider him a leader. He went his own way, taking modernism to a whole different level that few were ready to follow.

Wright instead is considered one of the founders of the Prairie School, inspired in the Arts and Crafts Movement – the British Art Nouveau. His was the idea that an American organic architecture had to follow horizontal lines, as opposed to the European verticality.

Straight lines and horizontality are the way that Frank Lloyd Wright will be inspired by nature to create buildings. And the infinite extensions of tree-less flat fields of the Mid-Western US became that inspiration. Actually, that's where "Prairie" comes from.
CHECK OUR ALL GAUDI DAY TOUR

Round shapes appear in Frank Lloyd Wright’s architecture in his late years, as you can see in his timeless Guggenheim Museum in NYC.

Instead, for Gaudi “there’s no straight lines in nature”. He pays attention to the rounded shapes and curvatures of leaves, flowers, bones and shells, and replicates them in his architecture. At least… at the beginning.

In 1912 he completes his last building before devoting himself completely to Sagrada Familia. In his hands, there’s a project that will take generations to be finished. He won’t be there to direct the works all the way to the end, and he is conscious he needs to leave a plan that the ones that follow can understand. He can’t be random anymore, but it still has to be unique and based in nature.

And that’s when geometry enters the scene. Gaudi studies the deeper structure of natural elements and discovers that those curbed shapes he worshipped are just the surface resulting of multiple straight lines combined at their core. He embraces hyperboloids, paraboloids, fractals. And he uses them in a way no-one ever dreamt of seeing in architecture before.

Both Prairie and Modernism agree that architecture projects must be a complete work of art, and for that the architect needs to take care of even the smallest elements of a building. That includes designing the furniture that will go inside, so it matches its container.
GAUDI TOURS IN BARCELONA THAT INCLUDE FURNITURE PIECES

Both Frank Lloyd Wright and Gaudi designed pieces of furniture that have become iconic. Wright’s pieces replicate the straight lines and squared shapes of his buildings, although he often favors verticality for his furniture in contrast with the horizontal lines of his buildings. Gaudi’s furniture is rounded and soft, to match the undulating façades of his creations.

However, Antoni Gaudi took his furniture design one step further, working on ergonomics when such word didn’t even existed. Seating on a Gaudi chair or bench is very comfortable, even when you wouldn’t expect it to be. His knowledge of human body even allowed him to create a church pew that is only comfortable when you are silent and looking towards the altar. But as soon as you start chatting with the one next to you, your back starts hurting. No chatting during mass!

Antoni Gaudi is believed to have been the creator of "trencadís", a mosaic technique consisting of using irregular broken pieces of tiles, often coming from recycled items, rather than perfect squared pieces made in purpose.
TAKE OUR PRIVATE PARK GUELL TOURS

Where did the idea come from? Some say a strike force  him to head to the tile factories and askfor leftovers to continue Park Guell. Some say a ceramic dish broke during dinner at his assistant Jujol’s house.

Frank Lloyd Wright came up with his “textile” concrete block system, that he refined and ended up renaming as Usonian Automatic System. It consisted of basic pre-fabricated concrete blocks with a particular joint system that allowed a modular assembly. The blocks could even be made on-site, reducing the building costs and even allowing the possibility of building DIY homes.

In 1883 a young Antoni Gaudi was called to replace another architect in the project of a church dedicated to the Holy Family - Jesus, Mary and Joseph. The original project could have been finished in just a few years, but Gaudi saw here his opportunity do do something exceptional.
PRIVATE LA SAGRADA FAMILIA TOURS

He worked on La Sagrada Familia for the last 43 years of his life, at first combining it with other projects, then completely devoted to it.

He envisioned an enormous church with 16 towers, and convinced his Catholic patrons that it’ll become a grand pilgrimage destination, attracting people from all over the world that will want to worship God there. And yes, nowadays it attracts millions of visitors… except that they come to worship Gaudi more than God!

4 towers had been built during Gaudi’s lifetime. 4 more were completed in the 1980’s. The inside of Sagrada Familia was finished in 2010. The remaining 10 towers were to be done by 2026 to celebrate the 100 anniversary of Gaudi’s death, but unfortunately the pandemic has slowed down the construction works. Anyway, it won’t take the 200 years Gaudi calculated: around 150 will be enough: That’s 50 years ahead of schedule!

Fallingwater (Mill Run, Pennsylvania) is a much more humble project, but not for that less fascinating. Built between 1935-37, it is said that Frank Lloyd Wright drew the plans in just a couple of hours, after being announced in short notice that his client was coming to visit when nothing had been sketched yet.

This private weekend residence was built partially over a river waterfall, and it is structured in layers of superposed balconies. All this implied a high level of complexity, which aroused arguments with his contractor, who didn’t trust Wright’s use of concrete. Actually, the contractor secretly doubled the steel amount without telling Wright!

Another big issue was its cost, originally estimated to be $35,000 multiplied by almost 5, ending up being $155,000. In defense of Wright I need to say Gaudi didn’t care much about costs either. Of course, the Sagrada Familia Church was paid out of donations and built as money came (now it’s mostly entrance fees from visitors).

However, when he worked for his friend the Count Guell, he’ll be given free hand to spend: the count was the second richest person in Spain. And he did get in trouble with the Mila for the cost of La Pedrera: the owners had to get a loan to pay for it when he went over budget… and they hated the house!

What about you? Are you an Antoni Gaudi or a Frank Lloyd Wright fan?