Get To Know Javier – One Of Our Awesome Male Tour Guides 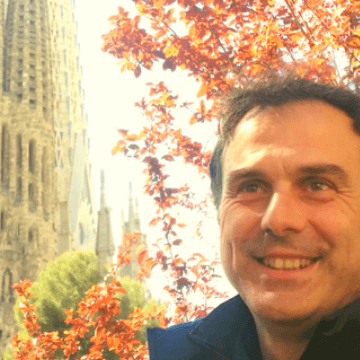 JAVIER’S INTERVIEW IS OUT!

Today we are continuing our series of interviews with the guides in our team, and it’s Javier’s turn! He is one of the two male guides in ForeverBarcelona, and a big favorite of our guests. Marta – the owner of the company – and Javier share a common point in their professional past: they were both protocol guides in the Sagrada Familia Church: Marta took over when Javier left to travel to Japan.

Then a few years later, when Marta had already left the Basilica to create ForeverBarcelona and Javier was back from Japan, they started crossing each by the concierge desks of the city’s high end hotels and finally Marta offered him to join her team.

Javier is famous for creating special relationships with his clients and connecting with them so he can deliver a special tour. His exciting life traveling around the world, even being a scuba diving instructor, has provided him with a fabulous personal background and experiences that he uses to enhance his tours.
MEET JAVIER

Let’s get to know Javier a bit more:

How did you become a tour guide?

I wanted to have a job where I offered a service I’d pay for, what meant working only in jobs that I was passionate about. So I became a tour guide and take groups around the world, thinking that’d allow me to travel the world and be in contact with other cultures.

Unfortunately it didn’t work out: the agencies I worked for wouldn’t send me to the countries I wanted to visit, and local tour guides looked down at me for not being licensed. It was hard to having to research each new country I visited, so I decided to settle in Barcelona and became a local guide, what allowed me to specialize in this one area and travel in the winter during the low season.

I am a Gaudi freak, and I was lucky to get hired in the Sagrada Familia church as a protocol guide, what allowed me to gain insiders knowledge about the architect and his works. Even in my days off you’d see me there, talking with the builders, the guys that control the cranes, the architects… But then I was offered the opportunity to work in Japan and improve my Japanese language skills.

When I eventually came back I worked at first with Japanese groups of tourists, but I soon realized I enjoyed much more to work for smaller groups and couples, and be for them like a knowledgeable friend that interacts and customizes the experience for them, rather than parroting the same speech over and over again. And here I am, doing what I love!

What’s your favorite moment in a tour?

Definitely the moment when we step inside Sagrada Familia. I prepare my guests for that moment from the very first minutes we meet. I tell them it’ll be the biggest highlight of their entire European trip, and I get them excited about that. I myself get excited, too!

And so it happens: we go inside, and they look up those amazing columns, and they go speechless. Sometimes their eyes feel with tears from the emotion. It’s just magical.

GET JAVIER TO SHOW YOU AROUND THE SAGRADA FAMILIA

Is that church your favorite site?

Yes! I have such a personal connection with it, since I worked there. I admire Gaudi deeply, and Sagrada Familia was his masterpiece: all his other works are spectacular, but nothing compares to the church.

I could spend 3 weeks there, and I’d still have things to discuss about it, and I’d still be learning new things from it. It’s not just a religious site: I can bring Jewish, Hindi, Muslims (I even had a client who didn’t know who Jesus was!), and every single person loves it.

What’s your favorite thing to do in Spring?

If we were in Japan, I’d say watching the cherry tree blossoms (Sakura). When I was there, at first I didn’t understand that Japanese obsession about that, but one day I was on a hurry, running over a bridge, and something I saw from the corner of my eye made me turn: the water canal was covered in pink flowers, and the sunlight was filtering through the canopy, pink as well.

VISIT THE BLOSSOM FIELDS IN A CUSTOM TOUR WITH JAVIER

Time stopped then. It touched my soul. I’ve heard there’s a couple of villages near Barcelona, Sant Climent de Llobregat and Arenys de Munt, where they grow cherry trees and they organize tours around the blossomed fields. There’s also peach trees with similar pink blossoms in Aitona and Ordal. I need to check them out!

April 23 – the Day of Saint George. For Catalans, it’s both Lovers Day and the International Day of Books, and the city is filled with stalls selling roses and books. As I tell my guests, it’s the only day of the year that I can buy flowers to other women without my wife getting mad at me, LOL! Plus many monuments get decorated with red roses for that day, too: Casa Batllo, Casa Milà, the fountain of the Cathedral…

I remember that when I was a kid, our school teacher was telling us the legend of St. George and the Dragon, and I asked him: Why didn’t he come earlier and save the other girls? Why did he have to wait until it was the princess turn to be eaten? I didn’t get why aristocrats had to have such privileges…

AND BONUS! Here is Javier’s favorite story to tell in a tour:

The Count Güell and the Rosacrucis

I don’t always stick to the “official” version of things. When we visit Park Guell, there’s a moment when I take my tour guide license out and whisper: “Now, what I’ll be telling you now it’s not official: it is said that the Count Güell, the owner of the Park belong to the Rosicrucian, he was in the highest ranks of this Freemason movement that has passed down medical knowledge from the Egyptian times.

VISIT THE PARK GUELL WITH JAVIER

There’s a theory that says that this Park might not have just been a housing development, but the location of a secret loggia. Look at the sign by the main entrance: there’s a star inside the P, and something that looks like the metal part of a ax. As it happens, the star and the ax are Rosicrucian symbols that represent knowledge and work…

What would you like to ask Javier on a tour?