GET TO KNOW OUR GUIDE LÍDIA

TODAY WE ARE INTERVIEWING LIDIA!

Lidia has been collaborating with us since 2012. She finished her Tourism university degree in 1992 and was given her official guide license, but she says she was young and after consulting the local tour guide’s association she decided becoming a freelance was too complex and gave up on her dream of giving tours. She started working in travel agencies, hotels and logistics companies and had a baby. But then 10 years ago her work situation changed and she saw it as an opportunity to finally become a tour guide. It was then or never. And it worked! She loves her job, and she thinks throwing caution to the wind was the best decision of her life! 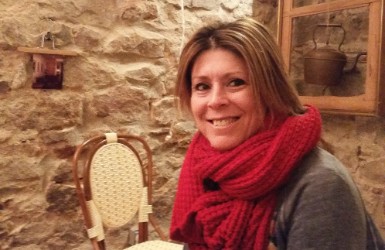 Let’s learn more about her:

Tell us more about the place you chose for your interview. Today we are meeting in one of my favorite places where I go to unwind. The tea shop Caj Chai is located in the heart of the Call – the medieval Jewish Section of Barcelona, and I discovered it way before I became a guide. You’ll often find me here when I end a tour in the area, or while I wait between two tours (I live out of town, so I don’t have time to go back home when I have two tours on the same day). They have a huge amount of teas – my favorite is the house Chai Tea, and lovely homemade cakes. The building is old, and the walls are thick and made out of stone, what makes cellphones lose their network plus there’s no WIFI – which isn’t such a bad thing when you come here to relax.

What’s the question you get asked the most? I’m recently asked a lot about the late political events (independence of Catalonia). Kids are usually intrigued to see people with a yellow ribbon on their jackets, which I explain them is to protest about Catalan politicians having been imprisoned pre-trial. People also asks about all the flags hanging in the balconies and their meanings: what’s the difference between the Catalan senyera, the estelada and the Spanish flag. Talking about politics is a delicate subject, everyone has their own opinion but my job is to try to be objective when explaining the facts.

What’s your favorite place to visit? I love the mountain and the monastery of Montserrat, I remember when I was a kid the nuns of my school would take us here on field trips. Later on I became an atheist, but now I feel the monastery reconnects me with my spiritual side and I’ve learned to appreciate it as something honest and profound, specially since I was on a training seminar organized by the monks for the local tour guides. When I take people there on a tour, my goal is to transmit the magic and spirituality of the place, as well as making them connect with the local landscape and nature. For this place has been fascinating people for centuries. 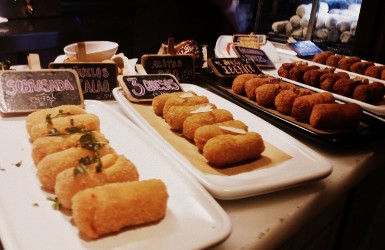 What’s your favorite food? I’m a tapas girl, and my favorite are croquettes – a classic choice! I love that they come in many flavors, and it’s fun to be surprised by creative ingredient mixes like sobrassada (a paprika pork spread traditional from Mallorca) with honey – I love sweet and savory combinations! Or those Gorgonzola cheese and walnut croquettes they serve in Can Marino, a local bodega in the neighborhood of Poblesec, at the foot of the Hill of Montjuic. Pair them with a glass of Montsant wine: in my opinion the red wines from this region are easier to drink than those from Priorat.

What’s your favorite tip for travelers? Visit a local food market, and if you can, have breakfast there. Before ordering, look around to see what the locals are eating, and then ask the waiter to make recommendations. That’s an easy way to connect with the locals and end up trying things you’d never had considered. Discovering new things, foods and concepts make travel fun. I’ve done this when visiting the North of Spain in Lugo, Bilbao… and I ended up getting recommendations for other great local things to do and where else to eat.

AND BONUS! Lidia shares her funniest mistake on a tour: 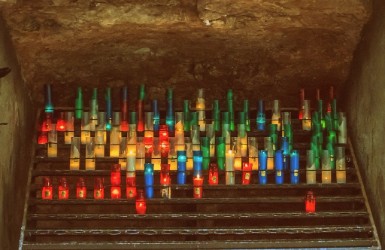 My funniest mistake. In my first year of guiding I was sent to Montserrat with a group from Thailand. On the way there, I spoke (in English, I don’t speak Thai!) about the life in the monastery, a life in community and prayer to the Virgin. At some point I realized my group looked puzzled at what I was explaining. It was then that I realized I had been speaking about the “monkeys” of Montserrat instead of the “monks”! I was so embarrassed! But in the end we all laughed at my silly mistake. Knowing that I meant monks, my guests said, all my speech about community and prayer made much more sense!

So what about you? Head to the comments below and tells us: Were would you like to have Lidia take you on a tour?