GET TO MEET OUR GUIDE MONTSE!

INTERVIEW WITH ONE OF OUR AMAZING TOUR GUIDES – MONTSE

Today we are continuing with our monthly series of interviews with the members of our team. We find it’s great to be able to introduce them to you, and through their answers you don’t just get to know them better but also can get great tips for your stay even if you aren’t taking a tour with them!

She became a tour guide by chance. Having studied Tourism in college, she received her guide license upon graduating but never got into guiding. She got a job at an inbound international travel agency, but they eventually closed their headquarters in Barcelona. She was still looking for a new job when one of his ex-coworkers called her: he was now working in a tour company and they needed tour guides. “Didn’t you have the official guide license?”, he asked. And that’s how she joined a company that offered step-in tours for huge groups where they had to repeat the same explanations in up to 4 languages at the same time. It was crazy, and at the beginning she thought she’d never be able to do that. But there she met Miriam and Bego, and after following them around in some of their tours, she quickly felt confident enough to do the same. 8 years later, she quit that company to go freelance and little after that she was already collaborating with ForeverBarcelona, recommended of course by Miriam and Bego.

Let’s get to know more about Montse:

What is your favorite tour? Montserrat! It’s funny because many visitors aren’t aware that this word isn’t only the name of the Mountain and Monastery, but it’s also a very popular lady name in Catalonia. So when I first meet my guests and I introduce myself there’s always that awkward moment when they don’t know if I’m telling them that we’re visiting Montserrat or what’s going on. It’s a funny situation! Then when I explain them that Montserrat is also my first name, and we get some good laughs about the confusion – It also helps to break the ice. And I do love Montserrat, not just the monastery area, but specially taking the funicular to St. Joan to enjoy the mountain views from there.

Do you have any special ritual before starting a tour? One of my passions beside my job is theater, and I’m an amateur actress. You might have heard that actors have always little rituals before going on stage, and I somehow feel like I’m getting on stage before I start a tour. To feel secure, I need to arrive to the hotel at least 15 or 20 minutes early so I have time to have a quick coffee and go to the bathroom where (besides using the toilet) I wash my teeth, comb my hair, wash my hands and apply some moisturizer on them, and put on some lip balsam. Only then I feel like I’m ready. If for some reason my train is late and I don’t have time to do all that, the first contact with my guests doesn’t feel as comfortable. Maybe it’s because I live out of town and my mornings are rushed so I can get the early train. But this little ritual makes me feel relaxed and secure. 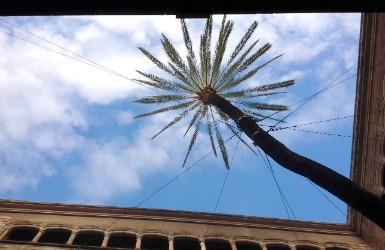 What’s your favorite area in Catalonia? I’m a seaside person. I love the Costa Brava: its villages, its people. But let me talk about my homeland: the Maresme, a county just North of Barcelona all along the coast. It is maybe not as scenic as the Costa Brava, but I believe it’s underrated: it offers very interesting contrasts between the hills and the seaside, it has a very fertile land and a lovely microclimate with similar temperatures to Barcelona but without its humidity, and it doesn’t have the Northern winds of Costa Brava either. We grow delicious strawberries, green peas and really nice wines of the Alella origin denomination. The population from the hillside villages tend to have an industrial and cooperativeness past, whereas the seaside villages have a more open-minded mentality – probably due to their fishing and sailing pasts.

What’s your favorite story to tell on tours? When I’m walking around the Gothic Quarter, if we aren’t rushed and specially if we have kids, I tell them the legend of the Palm Trees in Love. There are two courtyards there, the patio of the Ardiaca house and the cloister of the Cathedral, each one with a very tall palm tree – both much taller than the average palm tree. They are even tied up with ropes so the wind doesn’t uproot them. Well, the story says that the two palm trees could see each other and fell in love but then the Northern side of the Cloister was added one more floor and they couldn’t see each other anymore, which is why they grew up taller trying to see each other again over the rooftops. In fact, they do seem to lean one in direction of the other. I think it’s a cute story, but of course, don’t take it for real.

What’s your favorite tradition? Saint John’s Eve! On the evening of June 23 Catalans celebrate the solstice by lighting fireworks and firecrackers. Maybe it’s my Valencia blood that makes me love that part of the tradition so much (in Valencia fireworks are huge!). I love to celebrate the shortest night of the year by the beach with my family, although we sometimes go to some friends’ house. When I was younger, I’d go to the beach and stay until the sunrise as it’s traditional, and get a swim. I even did it when I was VERY pregnant with my first child! (that now is in his early 20’s). To me is a very special and magical night full of happiness and party. 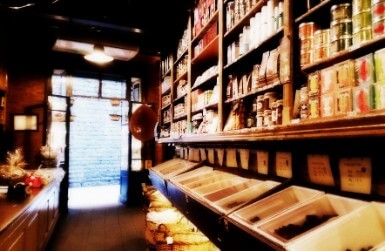 What’s your favorite shop in town? I love Torradors Gispert, in el Born: they’ve been roasting nuts for over 160 years and they continue to do it in their old wood oven. I love to include it in my tours when we pass by (either they are food tours or not). I love nuts, and I think there isn’t a single product they sell there that I don’t like. Plus it’s so fun when you arrive and they are roasting (a moment that isn’t that easy to hit): touching the metal of the oven to feel its warmth, seeing the piled wood in one side… if we are lucky and the shop assistants aren’t too busy, they sometimes are happy to explain the process and even let us try some warm nuts right out of the oven. It’s so much fun! And even if that doesn’t happen, the shop is so wonderful it’s still worth going in.

So what about you? Head to the comments below and tells us: What question would you like to ask Montse?

2 thoughts on “GET TO MEET OUR GUIDE MONTSE!”