Getting To Know Our Tour Guide Sandra 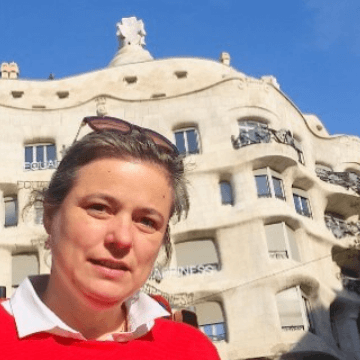 TODAY WE ARE INTERVIEWING SANDRA

Since she was 15 years old, Sandra loved reading history books, and she followed her passion to major in History in college. After she finished her university degree, a friend of her mom connected her with a tour company that needed new guides, and that’s how she started giving tours.

Soon she was able to pass her exam to become a licensed tour guide, and that’s how she met Marta – the owner of ForeverBarcelona, who was also working for the same company occasionally and passed her exam the same year. Soon Sandra realized that being a tour guide was the perfect job for her because besides history she also loves being with people and exploring sites.
MEET SANDRA

These are Sandra’s best kept secrets:

What’s the weirdest thing that has happened to you on a tour?

Before it was officially open to the public, the owners of Torre Bellesguard used to keep the doors of their garden open so visitors could freely go in and see this hidden gem from outside. There used to be a white dog (similar to Tintin’s Milu) so before entering I always warned my guests that there’ll be a dog but it was safe.

However that day we didn’t find a dog but… a boar! It had come down from the nearby Collserola forests and it was there in the garden eating the grass. It seemed to be used to tourists, though, because rather than being scared or worst, getting aggressive, it just continued to eat without even looking at us and we were able to proceed our visit as usual. I think we took as many pictures of the boar than of the building!

I feel very attached to Picasso, maybe because he was from Malaga, and that’s also were I was born. Actually, my mother’s uncle was the gynecologist that assisted my birth, and he lived right in front of Picasso’s home! Picasso was someone with a strong personality and through his paintings he exposed what he liked and what he disliked.

The painting that has ever impacted me the most was his Guernika, that my parents took me to see when it arrived to Madrid after having spent years on loan in New York. I was only a child but his magical vision of the Spanish civil war, death and horror had a strong impact on me. One of the reasons why we called our own son Pablo is because of Picasso, who’s full name was Pablo Ruiz Picasso.

VISIT THE PICASSO MUSEUM WITH SANDRA

What’s your favorite place in Catalonia?

I love the beaches of Sitges. In the Summer, we take the car and get there early around 8AM when the crowds haven’t arrived yet. I love to swim in the sea, watch the fish with my googles, feel the breeze and taste the sea salt. Around 11AM it starts getting full, and that’s when we head back to Barcelona. 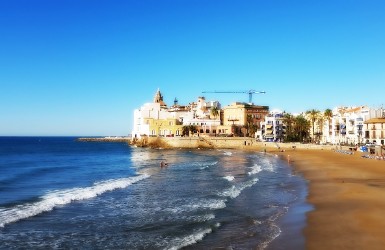 I also love the wonderful combination of museums, art, architecture and beach that Sitges has to offer, since it was the cradle of the Catalan Modernism. I love to walk around its whitewashed alleys, walk up to the church of Saint Tecla and from there watch the Mediterranean sea. And of course, end my day with a tasty paella lunch.

Sometimes I think I’m a frustrated archaeologist, and if I was born again I’d study to be one – but when I was in college that option wasn’t available yet. I love taking my guests to the Museum of History of the City (MUHBA) with its Roman ruins and helping them read the stones in that phenomenal basement, interpreting for them the water canalization system, the civilian engineering, how the Roman recycled stones from dismantled buildings to reinforce their walls…

Everyone has played Lego in their childhood, so we are prepared to understand how much more difficult it must have been for the Romans to build what they built.

What tradition you love the most about this time of the year?

I was born on a January 4 and maybe because of that I love winter, the cold and the snow (even if it doesn’t snow too often here). In the winter I buy roasted chestnuts from the stalls in the streets, I go eating hot chocolate and churros, and I never miss visiting the local Christmas markets to buy our Christmas tree and some new decorations or pieces for our nativity.

I delight hearing Christmas carols as I walk around the market. In Barcelona we have on in front of the Cathedral of Saint Eulalia and one in front of Sagrada Familia. When I travel around Europe, I also try to visit the Christmas markets.

AND BONUS! A last question where Sandra goes personal:

What city site are you most attached to?

When we moved from Malaga to Barcelona, my parents first rented an apartment near the Ciutadella Park, and while my father when to college during the daytime, my mom would take me and my brother to the park and we’d spent time feeding the ducks at the pond, climbing the mammoth sculpture, playing around… 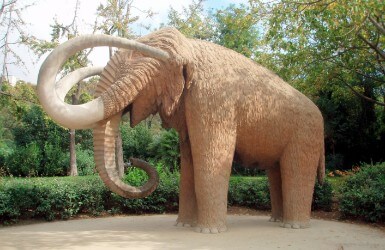 WALK AROUND LA CIUTADELLA WITH SANDRA

I later on got married in the chapel of the park, and we had our wedding pictures taken in front of the monumental waterfront. When I’m touring with families, I often take them to the Ciutadella park because kids have a blast there, specially when there’s that guy that makes giant soap bubbles. And by pleasing the children, the parents are also pleased.