THE BARCELONA CATHEDRAL: NOT JUST ANOTHER BORING CHURCH

DISCOVERING THE SECRETS OF THE CATHEDRAL OF BARCELONA

During our tours lot of people tell me they’ve seen too many churches already. But actually, visiting a Barcelona Cathedral can be fun: it all depends on the stories that are hidden there and how those stories are explained. I have actually had kids telling me “This is the only time I have ever enjoyed being inside a church!”.

That’s why the Cathedral of Barcelona is one of the top sites of our Gothic Quarter tour, despite not even being one of the most famous cathedrals in Europe!. 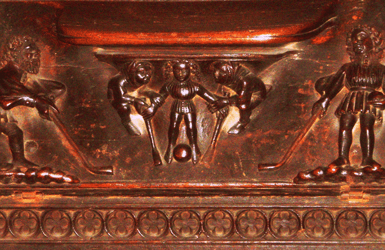 Here are our 5 favorite things to check out in this gorgeous gothic Cathedral:

“Mercy” chairs of the Choir. The traditions says that in the old times the monks had to be standing all the time during the mass, and they would get really tired. One day one monk said: “Please! Have mercy on us!”. And these little chairs were created for them: enough to rest on them, not too big so they didn’t fall asleep during the service… However, during other events such as meetings, the monks where allowed to flip the mercy chairs down and then they become quite comfortable armchairs! Check out their decoration: one of them represents a hockey game!

Saint Eulàlia’s crypt. The first patron saint of Barcelona, Saint Eulàlia, lies here under the altar of this Barcelona basilica. According to the legend, she was a Christian 13 years old girl that refused to worship the Roman gods, and that is why the Romans tortured her 13 times. If you like bloody stories, the description of the tortures is quite juicy… 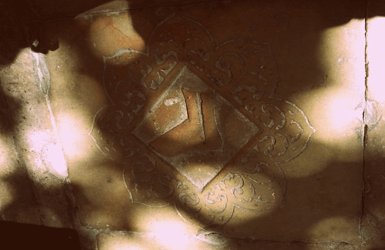 Rooftop. Not many people realize that in a side chapel to the left of the main altar there that it’s an elevator that you can take to get to the rooftop of this Gothic cathedral. From there you a superbe view of the city of Barcelona, specially over the Old Town, the port and the Hill of Montjuïc. And you also get a close view of the bell towers. In the main skylight tower hides a sculpture of a snail. Check out this video that I shared on my social media some time ago, and try to see if you can find it!

Tombstones in the cloister. The cloister of the Barcelona cathedral was the place of honor to bury the most important people of the guilds of Barcelona in the Middle Ages. It is fun to play and try to guess what were their professions: you will find bakers, tailors, doctors, shoemakers… 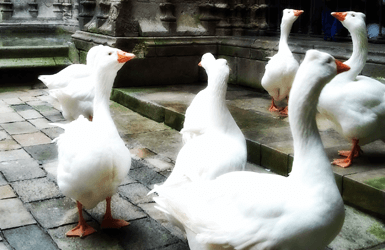 13 gees. One doesn’t expect to find animals in famous cathedrals… But the definite rock stars of this cathedral are the 13 geese that live in the cloister: one for each year Saint Eulàlia was old when she was tortured 13 times. They had also supposed to alert the monks when a thief entered at night: a great medieval alarm!

AND BONUS! Where to see a mermaid with 2 tails?

The mermaid. The façade of the Cathedral of Barcelona isn’t really Gothic, but Gothic revival instead, as it was built in the late 1800’s. However, it features a lot of medieval symbolism and in the Middle Ages mermaids with two tails where a warning against the temptations of luxury (they represent a woman with her legs open!). The one that decorates this façade is not that provocative, though, as it seems to swim with both tails twisted one around the other. If you look at the arch crowning the main entrance, you’ll discover her towards the bottom of the right legs of the arches (tip: you can find her in the top picture of this blog post!).

Now it’s your turn. Head to the comments and tell us: will you be visiting the Barcelona Cathedral on your next trip and why?