BARCELONA IN AUGUST: THE GRACIA FESTIVAL

THE GRACIA FESTIVAL, AN EVENT FOR THE WHOLE FAMILY

Next week, the streets of the Barcelona Gracia neighborhood will decorated by the neighbors during the Barcelona Festa Major de Gracia. They use simple materials such as recycled plastic bottles and cardboard, creating amazing landscapes and sculptures that will be for a whole week the setting for one of my favorite local celebrations. This Gracia Festival is one of the best summer events in Barcelona, and takes place during the days around August 15th.

But navigating the alleys and streets participating in the Gracia Festival can be tricky even for those locals that don’t come to these neighborhood too often. First of all, make sure to grab the Gracia Festival program distributed by the neighbors in the participant streets (there is usually either a bar stall or souvenir table where you can find it). Or you can also download it from the Barcelona Festa Major de Gracia website. Apart from a list of all the activities going on each day, you will also find a district map that will be very helpful.

But now the important thing is to choose carefully where are you going to head. While some streets are famous for their creations, other streets are more humble and maybe not that worth walking 15 minutes to visit them. Today I am sharing with you the streets that are safe that when you are visiting the Barcelona Festa Major de Gracia.

These are the top streets in the Gracia Festival:

A classic among the top streets of the Barcelona Festa Major de Gràcia. Being at the top of the district, many people will start their itinerary from here, then walk down to explore the rest of decorated streets. A colorful bottom of the sea, a land of mermaids and pirates or a Far West Village (1st price in the 2012 Gracia Festival street contest) have been some of their latest creations. The living prove that traditional streets don’t always have to be the winners: in 2011 this trip that usually would move around the 10th positions in the state classification, made the big jump to the podium where they have remained ever since. Their trick has been inviting younger generations to participate decorating their street, that have acquired a Tim Burtonish touch.

Although two consecutive sections of Fraternitat street get decorated by their neighbors, the one that usually gets a better position in the contest (ranging between 1st and 5th places) is the lower part of the street (that is, south or downhill). They have a family-friendly style that will transport you to your own childhood. Last year, with their gorgeous farm they should have gotten more than only a 4th place in the Gracia Festival contest. 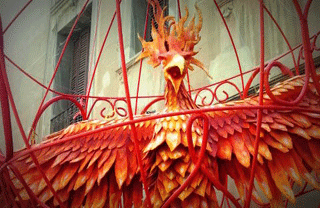 Another favorite of mine in this Barcelona Festa Major de Gracia is this street, divided into upto 3 different sections depending on the year. While Joan Blanques de Baix de Tot (the lowest end of the street) has ranked better than the other sections, Joan Blanques de Dalt (upper Joan Blanques) has always fascinated me by its poetic touch.

This street was awarded the 1st price last year after classifying consistently in 5th place in the previous editions of the Gracia Festival. Movies are a recurrent theme: UFOs land, Star Wars and their award-winning Jurassic Park have been their latest theme choices.

AND BONUS! Have time for one more? 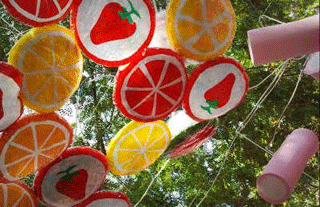 Although not really ranking high in the Barcelona Festa Major de Gracia contest, it’s always forth checking out this square where the town hall is. You’ll find here plenty of outdoor cafés to enjoy a drink or snack while people watching, and you’ll head here to see the Castellers (human castles). Its evening concerts are also quite popular.

Now it’s your turn! If you’ve been to the Gracia Festival, go to the comments and tell us how was your experience and what was your favorite street!