Interview To Our Guide Bego (Begoña) 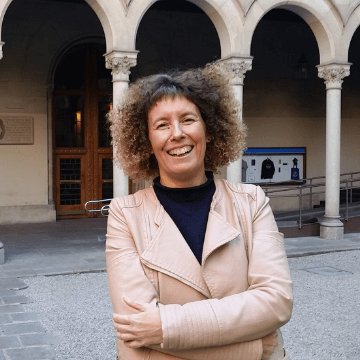 GET TO KNOW OUR GUIDE BEGO

Bego (short for Begoña) is another of our favorite guides. Like many of us, she became a guide by accident – just to discover it’s her true passion. She studied Tourism in college, and by then you’d be given the official guide license after finishing the studies and passing a final exam – the Reválida, but she wasn’t really intending to be a tour guide yet: she didn’t think she’ll be brave enough to stand in front of a group! So during college she started working in the accounting department of a local travel agency, that wanted her to stay, but she found it boring and they wouldn’t move her to a more exciting department.

So when a friend told her about the possibility of spending a year in the US working as an au-pari (in-house nanny), she tought it’d be a great way to travel and improve her English skills. Her family didn’t oppose to her living abroad for an entire year: they come from Galicia, a land of immigrants, and it just felt natural for them. It was a great experience, but when she came back she had no job until a friend called her to show around a group of local seniors, and she loved it.

Then she worked for another travel agency that trained her to give tours, and in just a few weeks they sent her by herself to lead a group for a week on the Carnival of Venice. It was scary, since she’d never been there before, but she knew that if she survived, nothing else would be able to stop her! And that’s how little by little she got introduced in the captivating world of guiding tours.

Let’s get to know her a bit better!

Begoña, have you ever showed around anyone famous?

Yes! But I didn’t realize until almost the end of the tour. Baseball isn’t popular in Spain, so when I lived in the US I was curious to attend a match. My host family told me one player of the local team, the Oriols of Baltimore, was about to break the national record of consecutive matches played by a player: Cal Ripken.
GET TO KNOW BEGOÑA A BIT MORE...

I saw him play several times during my stay, and his name was the only player name I ever got to memorize. So back to Barcelona, I was asked to take a group of 11 people to the Picasso Museum, and after the visit I noticed two people were missing. When I asked, their friends told me: “Never mind, the Ripken do that all the time”.

I then asked them if by any chance they’d be related to the baseball player and they laughed and said: “Of course! It’s him! But how do you know about him?”. So when they came back their friends told them about me knowing who he was, and we all had lots of fun sharing stories and taking pictures together.

Definitely Castellers, the Catalan human towers. It’s too bad that you can only occasionally see them in Barcelona – but if they are doing it during your stay… don’t miss it! My guests often ask me if the child at the very top, the anxaneta, isn’t scared. And I answer them that often other members of their family are on the team: so as the child starts climbing they see their grandpa in the base of the tower, their mom in the second floor, their older brother, two floors higher…

It’s reassuring to know that your family is doing everything they can to get you to the top safe and sound! Plus even if they are competing against other teams, there’s a sacred rule: if the kid is scared, he or she aren’t sent up. They are very respectful with the kids emotions and decisions.

Is there a special painting you love explaining in a museum?

Although it’s not very famous, I love the story behind the Battle of Tetuan by Marià Fortuny that takes up a whole wall on the MNAC museum. In a time when there were no photojournalists yet, the artist was sent to Morocco to paint a painting about the war and victory of the Spanish army, in a very complex political time. Fortuny didn’t attend the battle, as he arrived after it was over, so what he painted wasn’t real (and we think “fake news” are something of our times!).

GET BEGO TO SHOW YOU AROUND YOUR FAVORITE MUSEUM

He even had to make up a different landscape because the battle took place in some really green marshals that no Spaniard would ever believe could exist in Morocco (which we associate with the desert). Also, he painted the Spanish generals in the front line – when they would never have been really fighting  (well, except General Prim). And to make the enemy look even more despicable, he painted in one corner a Moroccan stealing from the body of a dead fellow.

What’s your favorite story that you always explain in your tours?

I have two: In Sagrada Familia I love to point out at the musician angels of the Nativity Façade that have Japanese faces, because they have been done by a Japanese sculptor: Etsuro Sotoo. People love that! I also love stopping in the courtyard of the Palau del Lloctinent, where there is a panel that reproduces the contract between Isabel the Catholic and Christopher Columbus.

She states that “any goods, either precious stone, gold, silver, species or any other thing or good of any name, specie and kind that are found, exchanged or had” would be for her except for a 10% that Columbus would keep for himself. It’s amazing how good the lawyers of the Queen were in the late 1400’s! LOL

What’s that tour you’d love to give that you haven’t done yet?

I’d love to take someone visiting the Castle of Púbol and the House of Portlligat in Cadaqués, the other two Dali museums in Catalonia. I love his museum in Figueres because it allows you to talk about so many different things: not just art but also politics, science, psicology… And it’s a museum that breaks with the pre-conceived idea of a museum being a building with paintings in its walls and that’s it.

The Theater Museum is a surrealist piece by itself: it’s great to understand who he was, where he came from, and why he faked being crazy. Taking someone to Púbol and Cadaqués would allow me to go even more in depth into the character – such an intelligent man! Plus the landscape of Cadaqués is impressive.

AND BONUS! Here is the restaurant Bego recommends to everyone:

I am a privileged girl: I grew up in Sant Pol de Mar, a little seaside village north of Barcelona. In those times, the Ruscalleda family owned a small supermarket, and their daughter Carme cooked food to go that was sold there. I would only ever eat the cannelloni made by her, when I was a child! And when her parents retired, she opened a restaurant that now features 3 Michelin stars.

I love how she has remained connected with her land and even if she does fine cuisine, she’ll only use local products from the season and her recipes are very honest. Plus every year she opens one day only for the people that lives in the village, at a special price. Because I can’t deny it: it isn’t cheap! But it’s so worth it! Don’t be deterred by the fact that it’s outside of Barcelona: they can arrange a taxi to take you back after dinner. And if it’s really out of your budget, then I have another (way simpler) recommendation for you: don’t leave Barcelona without trying the tomato bread from Vinateria del Call or the Colmado La Pineda.

NOTE: Unfortunately Carme Ruscalleda closed her Sant Pau restaurant in late 2018 to pursuit other professional projects, but we decided to leave this part of the interview because it beautifully expresses a part of Bego’s personality: her enthousiasm! The good news is that Ms. Ruscalleda’s daughter has opened a café in the same venue.

What were your favorite insights from this interview?