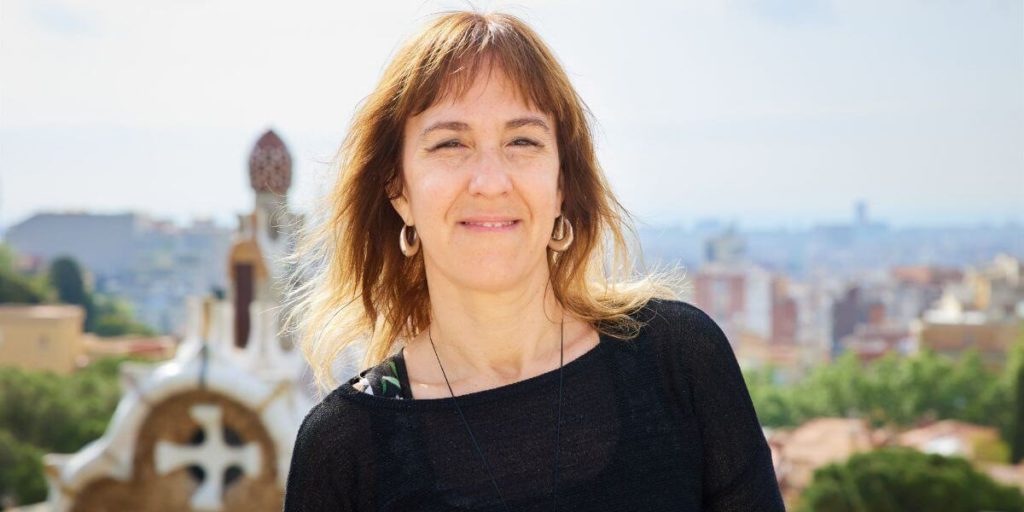 I was born and raised in Barcelona although I have also lived in other cosmopolitan cities around the world such as London, Berlin, San Francisco and Sydney.

My greatest passion will always be Barcelona and it is for this reason I became a tour guide in 1999.

I attained my degree in Tourism in 1995. At that time I already had a clear goal to become a guide in order to present my beautiful city to people from all over the world. I first worked as a guide in Gaudi’s famous masterpiece Casa Milà for 18 months, where I gained a deep knowledge of Gaudí’s work and experience in guiding people of other cultures.

Since then my tours have expanded to other areas such as exploring the art, history, literature and gastronomy of Barcelona and even the surrounding areas of the Catalonia region outside Barcelona. I have also guided secondary school study groups.

I love meeting people of all age groups and cultural persuasions.

What we love about her

Marga is a top-class guide with a deep connection to her culture and has always had a clear goal to share with the world the many wonders of Catalonia.

She is a gifted story teller and relays the history of her ancestors in an accessible and entertaining way along with a great sense of empathy and good humor, and she’s always ready to show you those hidden gems easy to miss on your own.

She’s absolutely lovely and a delight to be with. Plus with her, you will learn an incredible amount in only a few hours: she’s highly informative and knowledgeable, and she knows how to make you enjoy your time with her.

in our guests words...

This is why everyone raves about Marga:

Daniel C (Ramstein, Miesenbach, Germany)
★★★★★
Read More
She was extremely knowledgeable, but when she spoke about the sights and the history of the city, she made it fun and interesting immersing us into her stories. I have a 9 year old daughter and Marga went out of her way to teach her so she could understand. She also tailored our tour to our interests and timeline. If you want a passionate and brilliant tour guide, ask for Marga!

Jennhaber (Washington DC, Columbia, USA)
★★★★★
Read More
Marga was a dream! She tailored the content, kept everyone interested & made sure I still got the level of local insight that I was hoping from a private guide. #ForeverMarga – she really was a great find!! Well worth the investment.

Lhusseini (New York, USA)
★★★★★
Read More
She provides you with information as if she’s telling the story for the first time.

Jan H (Suffern, New York, USA)
★★★★★
Read More
My sister and I booked ForeverBarcelona’s 4 Hour Barcelona Private Gaudi Tour. Skipping lines and all that is great, but lots of tours can do that for you. Marga, our ForeverBarcelona guide, gave us an exceptional Barcelona experience that I don’t think could be easily duplicated. Her knowledge and experience on Gaudi and Barcelona – both past and present – was very impressive, and she was a delightful person to spend the afternoon with. This was truly the highlight of our stay in Barcelona.

Debbie M (New York City, NY, USA)
★★★★★
Read More
Marga, our guide, was perfect – very engaging and knew how to entertain my troop! She knew her stuff but also captured my boys interest with snippets of Spanish history and life. My kids were very impressed and have since talked to friends about what they learned… which is a good measure of how much went in!

Richard P (San Diego, California, USA)
★★★★★
Read More
She took us where we wanted to go, and pointed out places we would have missed on our own.

Kelly M
★★★★★
Read More
I had a fantastic tour of Barcelona with Marga! She immediately put me at my ease, and it felt like I was pending the day touring the city with a (very experienced) friend. She is extremely knowledgeable about history, culture and current events, and organized a seamless experience, allowing me to just soak in the day. I saw all of the highlights, but also cme away with an understanding of the culture of the city.

Joy S
★★★★★
Read More
Marga was an excellent guide, both in mastery of content and how easy she is to be with.

DavidgF2161YY (Birmingham, Alabama, USA)
★★★★★
Read More
Marga did a great job showing us through the Boqueria before we started the tour. Her knowledge of the food scene in Barcelona was outstanding. By the way, Marta’s recommendation of Can Sole for paella was excellent. Thanks Marga.
Jenlikesbeaches
★★★★★
Read More
Needless to say we were SUPER sad to leave Marga on our last day. No doubt we will be back in Barcelona one day – we would do another tour with her, maybe Gerona?!? Never enough time, but Marga made sure we got the most we could in three days.

Thughes (Pittsburgh, Pennsylvania, USA)
★★★★★
Read More
Marga transferred her love and knowledge of Barcelona to us. What an enjoyable way to experience the city. She delivered a personal tour of Barcelona by car and foot tailored to our preferences. Marga is knowledgeable and pleasant and passionate about her city.

Anjikan (Wichita, Kansas, USA)
★★★★★
Read More
Like a hip guidebook come to life.
Julie S (Drummoyne, New South, Wales, Australia)
★★★★★
Read More
Traveling as a family of five, Marga made it interesting for us all, moving at just the right pace to give us adults the history and stories we wanted while not too long for the impatient teenagers.

Ajovani (Avon, Connecticut, USA)
★★★★★
Read More
Marga took me on a four hour tour of the Gaudi sites. She was exceptionally knowledgeable and sweet.