WHAT ARE THE BEST MONASTERIES NEAR BARCELONA?

Monasteries and abbeys are an important part of Catalonia history. During Middle Ages, communities of monks were used to repopulate areas that had been taken over from the moors, and new agriculture techniques were developed there. Many of them are great examples of medieval architecture: Romanesque and Gothic styles.

In most convents in Spain, the nuns’ and monks’ job was to pray and meditate but also to study and learn about literature and science as well as writing and transcribing documents and books.

The majority of Catalan monasteries had their own library, called scriptorium, where the nuns and monks used to work, and many of those incunables are still preserved. And that’s why its not a surprise that monasteries and abbeys have become crucial tourists sites in our times, for anyone wanting to understand better our local history. So today we are sharing with you the ones that architecture and history lovers shouldn’t miss when visiting Catalonia. 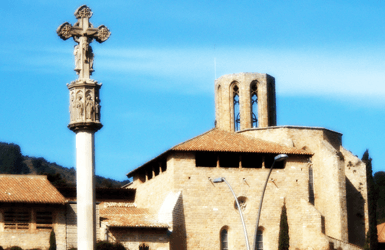 This is our top list of monasteries in Spain – Catalonia:

One of the very few monasteries within the limits of the city of Barcelona, this Gothic monastery located in the Pedralbes district was founded by Queen Elisenda de Montcada in 1327 has been a remarkable testimonial of the history of Barcelona and Catalonia. It is still nowadays occupied by a Poor Clare community: nineteen nuns live here, dedicated to pray and perform monastery related works.

A popular tradition in Barcelona is to bring them eggs before a wedding so they pray against the rain on the wedding day, using this old saying: “Santa Clara i Sant Pujol, feu bona escombrada d’aquesta nuvolada que tapa el sol” which means: Saint Claire and Saint Pujol,  sweep away the clouds that are blocking the sun”.

Another monastery you might want to check in Barcelona is the Romanesque monastery of Sant Pau del Camp, located in the Raval district. We visit it in our Barcelona 4-day program, but can also customize a tour for you!

The origin of this Benedictine Monastery is unknown but the first documentation of its existence dates from 878, IV century. The legend says that some monks disembarked in the area carrying Saint Peter’s remains to save them from the Barbarian, and the Pope decided to build this monastery to keep them.

This is why it’s one of the few monasteries in Spain with the privilege to organize jubilees. In the 17th century it was abandoned, and it wouldn’t be until 1930 that it was declared a National Monument. The restoration started five years later.

The monastery complex consists of the church, the cloister and the monastic facilities,  and it’s built in terraces adapting to the natural slope of the mountain. In the province of Girona you’ll also find other historical monasteries in Spain such as Sant Pere de Galligants and Sant Daniel, both in Girona city.

The Cistercian order highly contributed to the repopulation of Catalonia, with the construction of impressive monasteries in a style than transitions from Romanesque to Gothic. The most famous of all the Catalan Cistercian monasteries was founded in 1150 by the Count of Barcelona after reconquering the land from the Moors. It’s one of the most important monastic complexes and the biggest one still inhabited nowadays in Europe. 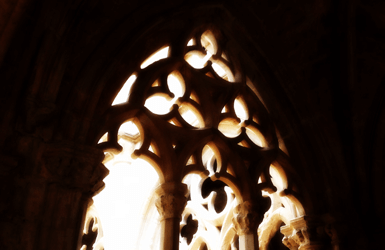 The complex consists of three separate but interconnected enclosures. The first one was where the workers and farmers lived. The second one is a big square where with the guesthouse, the modern abbey palace, the poor’s hospital and the old abbey palace. And the third enclosure is reserved for the monastery rooms. The other top Cistercian monasteries in Catalonia are those of Santes Creus and Vallbona de les Monges.

It was a Benedictine monastery founded in 950, nowadays one of the best maintained medieval monasteries in Catalonia. The community abandoned the monastery in 1907, and it was later on bought by the family of a famous local painter, Ramon Casas, a key character of the Catalan modernist movement.

Despite the monk community being gone, the church still continued its religious activity as a parish church now. In 2000 the enclosure started to be restored, and in 2007 it was opened again as Món Sant Benet: a new cultural, touristic, scientific and leisure center that takes a whole morning to visit and is relatively close to Montserrat – they can be visited on the same day if you are ready for a long excursion out of town.

A great option for a day out is taking the FFCC trains from Plaça Catalunya. Any train from the S1, S2, S5, S7 and S8 will get you to the lovely town of Sant Cugat in a mere 30 minutes, and then it’s an easy less than 15 minutes stroll to this medieval Monastery featuring one of the best preserved Romanesque cloisters in the world, next to an impressive Gothic church.

There’s also an interesting interpretation center included as part of the visit, and once you are done you can walk around the lovely town, or even take a self-guided bike tour on the countryside nearby in the Collserola mountains.

AND BONUS! This is the most famous monastery near Barcelona on a mountain:

Legend says that some herd-boys found the first Montserrat Virgin’s image inside a cave in 880 after seeing a bright light coming from there. When the bishop learned about it, he tried to move the sculpture to Manresa, but it was had become so heavy that nobody could lift it. So he though that the Virgin wanted to stay in the mountain and ordered to built a hermitage, and in the 1100’s the monastery was founded.

The Virgin is dark-skinned probably due to the smoke of candles lit around her centuries, what has given place to her nickname: La Moreneta (the sun-tanned girl).

Montserrat is the religious heart of Catalonia, a pilgrim place  and a symbol of the Catalan culture as it was a bastion of resistance during civil war. In this cliffside monastery in Catalonia live 76 nuns and the boys choir that sings in the Escolania de Montserrat, considered the oldest choir school in Europe, founded in the 1200’s. The monastery also runs a publishing house that it’s the oldest in the world still running: their first book was published in 1499.

In the mountain there are two more monasteries: Sant Benet, occupied by a community of nuns, and Santa Cecília, not inhabited anymore. Come visit with us the best monastery near Barcelona with our Montserrat Monastery tour.

What are your favorite monasteries near Barcelona?