We do have some strange recipes in Spain, and we already started discussing it in a previous post in our blog. But we thought there was more to be shared, and that’s why today we are adding a second part to it. Because there are two ways to travel: staying in your comfort level or pushing it further and trying things you’d never try at home. 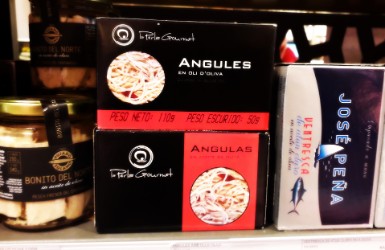 How daring are you? Maybe a bit in the middle? Would try some weird foods as long as they aren’t too extreme? Would you find the experience fun and memorable, or risky and disgusting, or even unnecessary? In today’s post you’ll find a collection of ideas that will make you at least consider once again what traveling means for you and how ready you are to access a foreign culture through its traditional foods.

Baby eels look like short grey and white spaghetti. The grey part is their back, and the white part is the belly. Considered a delicacy, they are sauté in clay pots with olive oil, some garlic and cayenne. A friend of my parents was born in Asturias (a Northern region of Spain with busy fishing ports), and she recalls how much she hated them because they were so common and cheap her mom will even make sandwiches with them. Nowadays things have changed, though, and they are quite rare to find – specially fresh. And they are really expensive – blame the Japanese who take them away to Japan to grow them for unago sushi.

Spaniards love them so much, though, that we’ve figured out a way to satisfy our cravings and now you can find “fake” angulas in the supermarket. They are called Gulas, taste pretty much the same as they are made out of surimi fish paste, and look almost the same: they still have a grey back and a white belly but… they don’t have eyes! So here’s the trick to know if you are being served the real thing at a supermarket (if the price and the name on the menu weren’t enough): real angulas have two thin slits in one of its ends – the eyes. Gulas do not.

High end marisquerías (seafood restaurants) such as Botafumeiro might have them on season, but there’s another way: you’ll often find them canned at gourmet stores such as Vila Viniteca, Colmado Quilez or El Rincón Gourmet del Corte Inglés.

Lampreys (Hyperoartia) are a fish-like animal that hasn’t evolved much since pre-dinosaurs times. It is long like an eel and has a large sucker in its head that it uses to attach to its victims and suction their blood (yes, we could call it a sea vampire!). Their suckers could really inspire the scariest alien movies – they are that ugly.

Adult lampreys return to the river where they were born to spawn, and they are fished in the Galician rivers February to April. The most popular way to cook it is on an slowly sautéed and browned onion with a touch of tomato, to which is added red wine and… lamprey blood! Sounds too lovely to be true, isn’t it? Well, it seems that hare à la royale is cooked in a very similar way, so…

While you’ll find it in most good seafood restaurants of Galicia when it’s in season, in Barcelona it’s quite hard to find. But if you’ll be in town around April, you can try your luck at Rias de Galicia and Carballeira (make sure to ask for it when you make your booking, though).

In Catalan, “rajada”, sting ray is fished all over the Mediterranean sea, and while families don’t cook it that often anymore it was common when my parents were kids). It’s a white fish that will remind you of sword fish, and only the flaps are edible as the skin doesn’t come out easily. Your fishmonger will do it for you, so you just need to throw it directly to the pot. 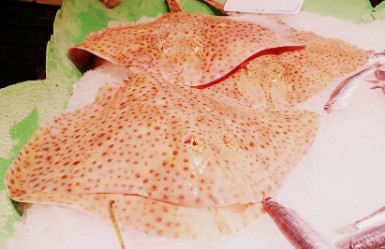 Fishermen would cook it on the ships with potatoes and onion, while high end restaurants would consider it a rare fine dish and cook it “à la beurre noire” – with black butter, that the French achieved mixing it up with sting ray liver, but since now it’s hard to find, the color is reached by browning the butter on a pan.

If you visit the Boqueria Market between March and July, when it’s in season, you might be lucky enough to spot it at the stall of “Angelina i Miquel”, in the central fish section, bottom alley to the left. La Barra de l’Abellan is a seafood tapas bar where they also serve it, but they combine it with Madrid-style tripe juices (extra bonus for adventurous eaters!).

Fried calamari (Calamares a la Romana) are a typical Spanish tapa, originally from Andalusia (South of Spain). However, it’s in Madrid where they had the idea of serving it as a sandwich – which in the rest of Spain we find weird, because after all, calamari rings are already coated in flour or bread crumbles before being deep-fried.

So how did it started? First of all, for those who aren’t familiar with the Spanish geography, Madrid is in-land, several hours drive from the coast. But being the Capital of the country, it’s always had an exuberant high society that had fish and seafood sent from the coast even if in the old times that could have meant 12 days of journey. You can imagine that when it arrived to the city, the seafood wasn’t that fresh… so frying it and sprinkling some lemon juice on it was a way to disguise the taste.

Plus the high society “imported” cooks from the coastal areas, that were used to cook seafood, and many of them eventually ended up opening their own restaurants and cafés where calamari became part of the menu because it was cheap and easier to clean than fish with bones.

Turning it into a sandwich filling was just a matter of time, as working class and students would find it the perfect way to satisfy their hunger. While it’s very easy to find in Madrid (just get someone to recommend a decent place, or you might end up swallowing a greasy low quality one), in Barcelona you shouldn’t miss the one at Bar Mendizaval, a “hole in the wall” in the heart of the Raval quarter.

When strolling around the Boqueria Market, one of the most fascinating types of stalls you’ll find there will be the offal stores (my favorite is Menuts Rosa). They are a paradise for adventurous eaters and curious travelers, and among all the imaginable animal parts you’ll also find some dark brown blocks… coagulated blood!

And how on earth do you eat that? Well, “sanguetes” are often just fried with caramelized onion and herbs. My dad used to love them! I’m not aware of any restaurant that serves them anymore (if you find one, let me know!), BUT… blood is also the main ingredient of butifarrons and morcilla, blood sausages that are super easy to find in tapas bars. You won’t have to go too far: right in front of Rosa’s stall, El Quim de la Boqueria has them almost always available.

But wait! Did you know Catalans eat farts? How is that possible?

Ok, we are not talking now about more creepy foods in Spain, but rather about weird Spanish food names. Because I obviously chose this specialty for its name, not for what you actually eat. Nun’s farts are a traditional cookie that according to the legend was created by an Italian cake maker that lived in Barcelona. And curiously enough, they were called “Nun’s tits” because they had a shape that sort of reminds you of a tiny woman breast. 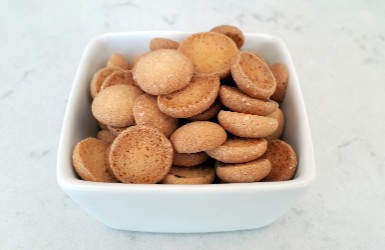 But the society being too puritan in the old times, the Catalan word for tit “pit” got transformed into a scatological but more acceptable “pet”, which means “fart”. Another theory says it came from the Italian “petto” (for breast). Whatever the books say… in my opinion the shape of these cookies still have to do with farts. Because you know when you fart and something comes out?… That!    XD

What Spanish unusual food you’d like to try (or would never try!) and why?