5 MASTERPIECES OF THE MNAC MUSEUM YOU SHOULDN’T MISS

The Museu Nacional d’Art de Catalunya is the largest museum in Barcelona, heart of the Barcelona art scene and a must for any art lover. It is divided in two floors, featuring collections that cover almost 1000 years of Catalan art: from the Romanesque paintings all the way to the early 1900’s vanguards, passing through the Gothic religious art and the Renaissance and Baroque paintings. Seeing just the highlights of each area can take at least 2 hours, and the whole museum takes a good morning. 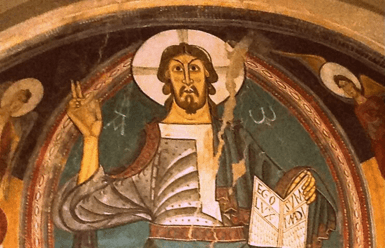 YOUR PRIVATE TOUR OF THE MNAC MUSEUM

Does it sound like a plan? Once inside you can also take the elevator to the rooftop to enjoy some of the best views over Barcelona, and have coffee or lunch in one of its cafés and restaurants (a break during such a long visit is always nice). And to make sure your visit is successful, today we have chosen for you the masterpieces that no visitor should miss.

These are the highlights of the MNAC:

The National Museum of Catalan Art possesses probably the best collection in the world of Romanesque frescoes, and the ones from the church of Sant Climent de Taüll are the most magnificent of all. They are simple yet intense, and they somehow connect you to a world of spirituality and faith. In our museum tours, our guests are always fascinated by the symbolism and the secrets hidden in them.

These frescoes were painted on old churches up in the Pyrenees 1000 years ago, then they were carefully stripped out and reglued to structures that reproduced the architecture where they had been originally painted: that was done to protect them from the bad preservation conditions that could have damaged them, but also to avoid that foreign collectors would buy them and take them outside of the country (yes, that was happening).

The Madonna of the Counselors

During the Gothic times, Barcelona lived a golden age that shows in the artwork that was being created. In the 1400’s the Barcelona city council sent the artist Lluís Dalmau to Flanders to learn new pictorial trends and prepare an altarpiece dedicated to the Virgin Mary, where the portraits of the local counselors would appear worshiping her.

Again, it’s a painting that will fascinate you by its details as well as for its history. It has a strong Flemish influence, of course, that shows in the faces of the characters as well as in the castles and the landscapes that you can see through he windows (so unlike what was common in Catalonia): it was a new trend appearing in the local art scene.

You don’t need to go to Museo del Prado in Madrid to see the great Spanish masters: the MNAC also owns some interesting paintings by Velázquez, Zurbarán… and El Greco, the famous master from Greece that eventually got his fame working for the Spanish Monarchy and the authorities of the Catholic Church, to later on fall in disgrace due to his views opposed to those of the power, that he reflected in his pieces.

We precisely love his Saint Peter and Saint Paul, not just for the powerful expression of the characters, but also for all the behind-the-scenes rebelliousness of the artist, who wouldn’t mind putting the religious authorities against him for speaking up his mind through his art: contrary to the official position, he considered Saint Paul more important than Saint Peter.

It was really hard to pick one single painting from the 1800’s and Modernism section… I maybe should have presented one by the 4 Cats gang: Santiago Rusiñol or Ramon Casas. But I thought you’ll anyway here about them when you are in Barcelona. Instead, you are less likely to hear about the artist Marià Fortuny who lived a bit earlier and was called to be a predecessor of impressionists… hadn’t he died so young due to some digestive disease caused for his habit of licking his brushes. 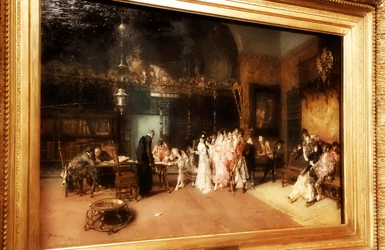 PRIVATE TOURS OF YOUR FAVORITE MUSEUMS
Yet he still had time to leave some intricately meticulous masterpieces such as this Spanish Wedding (of which he made several copies on commission). You’d spend hours just paying attention to every single detail of the characters’ clothes, the furniture… Mystery is also present: a letter in the floor, a hooded man holding a tray (you’ll have to take one of our MNAC museum tours to learn more about them!)

Although in the contemporary art section of the museum you can find Picasso, Dali and Miro works, we have chosen this beautiful sculpture by Pablo Gargallo as one of the museum highlights for its plasticity and how beautifully a few metal sheets can express the delicate movement of a flamenco dancer.

Don’t just look at it from one point: walk around it and see how it changes from every angle. We just love her eye: a tiny fan that reminds us of how this object is often used by flamenco dancers. By the way, Gargallo was a good friend of Picasso, from whom he did a couple of portraits (one of them, also in the MNAC museum), so the influence of Cubism is very present in this sculpture as well.

AND BONUS! Did you know you can also see some Gaudi works at the MNAC?

Although Gaudi is famous for his architecture, most tourists aren’t aware that he also designed furniture as well. And while you can see some replicas in La Pedrera, to see the originals you need to come to the MNAC museum. Pavement designs, wooden doors and metal door handles, mosaic pieces, wrought iron gates and balconies, and benches.

Our favorite: the bench he designed for the Cripta Güell church, whose design gets to make people stay silent instead of talking to each other during the service. 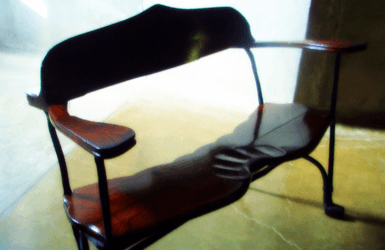 COME TO THE GUELL CRYPT WITH US

Are you planning to visit the MNAC during your trip to Barcelona and what other museums are in your list?