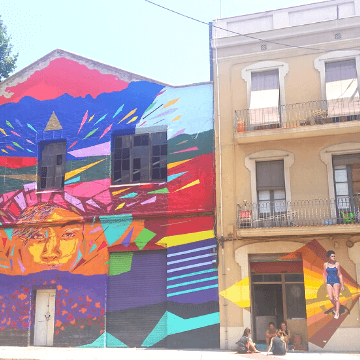 El Poblenou Off The Beaten Path

The Poblenou District was once called the Mediterranean Manchester. Here were located the many factories, most of them textile, that made Barcelona the first Spanish city to join the Industrial Revolution in the 1800’s. The neighborhood, once an independent village – hence its name “New Village”, welcomed immigrants and locals that moved in to provide labor hand to the factories.

And such industrial and working class origins are still latent in the structure of the district, that has been suffering a total transformation after 1992, when in the occasion of the Barcelona Olympics an end of the district was completely turned down and rebuilt into the brand new Olympic Village where the athletes lived. And while that mutilation didn’t affect the heart of the neighborhood, the transformation continued with the 22@ project that turned old factories and warehouses into art museums, universities and media and technology-related business headquarters.

The nightlife nightmare of macro-clubs over now, its cheaper prices and quaint style similar to that of Gracia, soon attracted young chefs and local entrepreneurs as well as families, that are also more than happy to live by the beach. And this is how Poblenou has become now the new place to be. Hop on the L4 metro line and come with us discovering it from the eyes of a local!
DISCOVER THE CONTEMPORARY ARCHITECTURE IN POBLENOU 22@

These are our favorite things to do in Poblenou:

Did you know there is more than one Rambla in Barcelona? The word “Rambla” comes from an ancient word that meant “bank of sand”, a kind of dry river that would only carry water when it rained. Occasional floods making it dangerous for buildings, they were left as broad roads that with the development of the city became boulevards, and often the center of villages and neighborhoods, as people would meet there to walk up and down.

The Poblenou Rambla is still nowadays the main axe of the quarter, connecting the Diagonal avenue with the Bogatell beach. Here you’ll find lots of cafés and restaurants, along with some important centers of the local community life.

The funerary art there is impressive: don’t miss the Kiss of Death decorating the tomb of a textile manufacturer. And if you like local traditions, make sure to visit the tomb of El Santet, a little boy who is believed to have granted miracles to those who have prayed to him.

Orxata is a traditional Summer drink. And no, the Orchata you drink in the US is NOT the real thing: Mexicans make it with rice, but the real orxata is made with tiger nut, a very small tuber. In Spain, the region of Valencia is famous for it. Notwithstanding it was there were according to the legend the king James I was offered tigernut milk by a little girl when he was thirsty and loving its taste he said “Això és or, xata!” (This is gold, dear) – hence the name of the drink.

PRIVATE TOURS OF THE REAL BARCELONA

So it was a family from Alicante (Valencia) who moved arrived to Barcelona in 1912 hoping to get a pass for a ship to Argentina, and while waiting to get the shop to arrive they eventually opened a orxata stall near the port. Their kids married and stayed in Barcelona opening more orxata stalls before they settled in the iconic corner of Rambla del Poblenou where they are located now.

No local will stroll down this Rambla without stopping for a orxata – and you shouldn’t either. Besides this drink, they also serve nice gelato and yummy sandwiches. BTW, we have an entire post on more great restaurants ideas for your day in Poblenou.

Located in 42, Rambla del Poblenou, don’t be mislead by its name: in Catalonia “casinos” were not places for gambling, but meeting points for the local men who would discuss politics and business in their cafés, but also a center for local cultural activities be it concerts, theater plays or art exhibits. L’Aliança was founded in 1869 to serve the working class community, and it continues to be a neuralgic point of the district.

In their gorgeous vintage theater room they continue to organize all kind of events, including ballroom. Ask the concierge of your hotel to call and ask if there is anything going on during your stay: attending a concert or dance there will definitely be one of the highlights of your stay if you love to mix in with the locals.

From the many old factories reconverted into new uses, let me recommend you to check Can Saladrigas, an old textile factory now housing the local library named after Manuel Arranz, a local personality and intellectual of the area, thanks to the campaign organized by the neighbors to save the building from being knocked down in 1998, who cherished it because it gave job opportunities to many locals in the past.

It is said that even if it was mostly women and kids because it was cheaper than employing grown men, at least in this factory the workers weren’t physically abused – which unfortunately wasn’t the norm. The building is now nicely restored to preserve its industrial masonry walls, and a tall chimney continues to proudly stand in front of it as a symbol of its past. BTW, don’t miss the exhibit of traditional Catalan parade monsters in the street level of the library.

AND BONUS! Did you know the district of Poblenou is also famous for its street art and graffiti and could compare to Miami’s Wynwood Walls?

With so many abandoned factories and warehouses, it’s no mystery that the Poblenou quickly attracted street artists looking for walls where to paint. And while it’s mostly forbidden to graffiti a wall without permission and eventually their works will be either cleaned up or destroyed when the wall is teared down, there are some streets where you can spot some cool ones.

WALK AROUND POBLENOU WITH A LOCAL PRIVATE TOUR GUIDE

Check the area around Cristobal Maura, Espronceda, Agricultura, Selva de Mar and Pere IV streets. But if you don’t feel like walking around without a direction, there is an entire block where the city council has allowed street artists to work. Head to the building surrounded by the Agricultura, Pallars, Josep Pla and Veneçuela. You’ll be surprised!

BTW, we recommend this street art bike tour in the area (not provided by us).

Are you planning to go off the beaten path and explore the district of Poblenou?