OFF THE BEATEN PATH: POBLENOU RESTAURANTS

EAT AT A POBLENOU RESTAURANT: WHERE LOCALS EAT

This neighborhood popularity  has grown over the time, adapting to the new trends and becoming one of the most creative and genuine areas of Barcelona. What makes it so special is the contrast between the new and the old, a result of its industrial past and its working-class origin combined with recent urban interventions performed by the city council to improve the district after the Olympic Games. Some old factories have been restored to preserve its industrial flare, while other were knocked down and substituted by high-tech buildings, and still other remain in ruins, their walls covered with graffiti… we can take you exploring Poblenou in one of our contemporary architecture tours, or you might just want to do it on your own if you are an independent traveler happy to go off the beaten path. Stroll around its streets and squares, watch the people on their daily business and get away of the tourist crowds for a while, while discovering the real Barcelona.

Yes, exploring this little known neighborhood that combines old factories and hip young businesses can be lots of fun. But it’s not centrally located and you are likely to get hungry by the time you are done with your walk. But no worries: there are plenty of great food options in the area. The restaurants in Poblenou will seduce you for their charm and gastronomic delights. In today’s post we are sharing with you some of our favorite.

These are our favorite restaurants in Poblenou:

This Poblenou restaurant is located in the emblematic Prim Square, a secluded plaza close to the sea and protected from the sun with the shade cast by 3 impressive ombu trees. The restaurant still preserves the fishing flare of the origins of the neighborhood before it became an industrial area, with its marble counter and the white table cloths. Here you’ll find both quality and quantity in a menu that changes every day depending on the season, the local products available and especially the fresh fish they get in the fish market. So of course, fish and also rice are their specialties. Let them choose the drinks for you: they have more than 150 references of wine, cava, distillates and spirits. If you come in the summer, make sure to get a table outside.

Poblenou restaurants aren’t much into veggies… But if you are looking for a vegetarian meal, then this restaurant is your thing. Opened by an Argentinian, an Italian and a Catalan cook, it offers a variety of vegetarian tapas, nice day menus (simple and unpretentious meals, yet colorful and tasty), plus nice organic wines and home brews. They use organic and seasonal veggies when possible, and also incorporate gluten-freen options in their menu. Their nachos and their vegan burgers are lots of fun. And make sure to try their desserts, as well. You’ll be positively surprised by their excellent service. 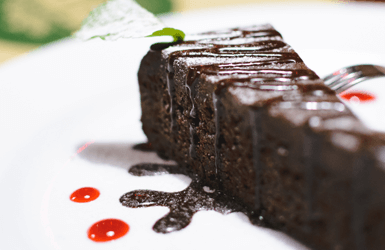 In the main street of the district, Rambla de Poblenou, you’ll find this relaxed and casual place where you can taste typical homemade dishes of the Catalan cuisine: tapas and market dishes made with seasonal products, plus a great variety of the best national and international wines. The name of the restaurant translates as “The three little pigs”, the children tale that inspired the owner. And effectively, pork is one of the main ingredients in most dishes (but not the only one). As you enter, a blackboard displays the dishes of the day. Its a good idea to order an assortment of them, so you can sample as many as possible. They also offer group menus is you are traveling with a larger group (book it in advance, though).

This lovely café is perfect for a  snack or a light meal, specially if you go with children, as they have a special area with games for them, and even a diaper changing station in the toilets. They offer a healthy and vegetarian-friendly daily menu, and plenty of home made cakes and smoothies. They also have a patio at the back if you prefer to be outdoors. This is our favorite address in the second main street of the district: Marià Aguiló street – a pedestrian area with a small village feel and plenty of interesting local stores.

This original and surprising restaurant is run by the chef Xavi Jovells and his cuisine is based in traditional tapas and dishes to which he applies new high cuisine concepts and culinary trends. A good example of the hipe but informal businesses that are recently choosing Poblenou for their headquarters. Don’t miss their oxtail, the croquettes, the octopus with “trinxat” (a Catalan dish made with potato, cabbage, bacon and black sausage) and the salmorejo (a refreshing Andalusian tomato soup), but save some room in your stomach for dessert: their Bombetes de Xocolata are amazing! (no, I’m not telling you what they are: you’ll have to go and try them). And the best past is that the prices are much more affordable than you’ll think when you see the quality of the product and the service.

AND BONUS! Here is where to buy the best orxata in Poblenou: 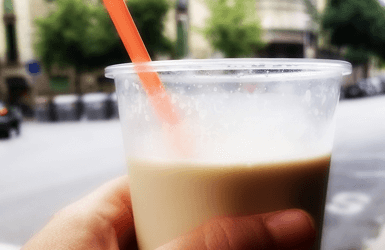 Orxata is a favorite Spanish summer drink, and locals know that definitely, this is the best place in Poblenou to taste handmade horchata. It was founded more than 100 years ago and their recipe has been passed down from generation to generation. Make sure to order your orxata with “fartons”, a Valencian pastry that locals dip on the orxata. They also have tasty ice creams and slushes. In the weekends, and specially in the summertime, locals flock the place: Don’t be afraid if you see a long queue, it’s normal… El Tio Che is a very traditional place to go with family and friends, so it is worth the wait.

So what about you? Head to the comments below and tells us: What’s your favorite Poblenou restaurant?