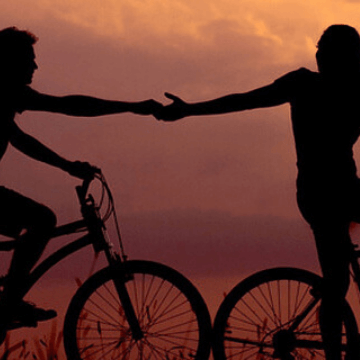 BIKE TOURS IN BARCELONA THAT ARE COMPATIBLE WITH OUR TOURS

It has happened again. The other day, one of our tour guides giving a private walking tour, and after having been going for already an hour her guests mentioned they had already seen those sites on a previous bike tour they took with another company. Oh no! Eventually our guide made sure to find out what else they had seen and reorganized their itinerary, but that first hour had already been wasted…

I’m so sad when it happens, and it’s such a waste of time for our guests! Specially when could be so easily avoided by letting us know before booking so we could create a custom itinerary that didn’t overlap with what they were visiting on the bike tour.

We don’t do bike tours ourselves because we believe they must be run by bike experts who are specifically trained about bike safety and mechanics and are covered by specific insurances. But we think sightseeing by bike is fun, plus it’s good for your health. And Barcelona is a very bike-friendly city. With over 75 miles of bike lanes, a popular public bike service called Bicing and over 100,000 regular users, our city could be called the “Mediterranean Amsterdam”… if it wasn’t that here it’s not as flat!

And that’s when combining a bike tour with a walking or chauffeured tour with a licensed guide like ours sounds like the perfect plan! As long as both itineraries don’t overlap, like it happened those guests we had the other day, of course. So if you don’t want this to happen to you, today we are sharing some bike tour itineraries that are usually compatible with other city tours.
WE'LL TAKE YOU INSIDE SAGRADA FAMILIA WITHOUT WAITING IN LINE

These are our favorite bicycle tours in Barcelona:

The Waterfront is a lovely area to go biking: it’s flat and there are convenient bike lanes and wide sidewalks that guarantee a safe ride. And how nice it is to bike by the Mediterranean sea? Our tours don’t usually cover this area in depth: while some of our chauffeured tours drive past it, they only give you a quick overview of it.

So it is a great idea to explore it more in depth, either walking around on your own or taking a bike tour that takes you along the Port Vell marina, the Barceloneta fishermen district, the Olympic Village and the Forum area. We hardly ever take people around the Ciutadella Park either, so if your bicycle tour includes it, go for it!

The Hill of Montjuic is one of the best places in town to see the city views, and you’ll find there most of the 1992 Olympics facilities as well as the structures from the 1929 World Fair. We do cover it in about one hour by car in some of our chauffeured tours, but again, it’s just a quick overview, so a dedicated Montjuic Bike tour will give you a more intimate idea of what the Hill has to offer.

And yes, we do have a half day dedicated Montjuic Walking Tour, but we are OK with you booking a bike tour with someone else if you book a Gothic Quarter or a Gaudi tour with us: they are fully compatible tours!

If you’d rather go on a ride in the nature, away from the city stress, head to the town of Sant Cugat del Vallès, just 20 minutes from the city center by FFCC train, where besides visiting a beautiful monastery you can get a audio-guided tour around the surrounding Collserola range, with its forests and farmhouses and water springs. Don’t fear to get lost: it’s an easy circular itinerary that takes some 2 hours to complete, and you’ll be equipped with a GPS for extra safety. Since we don’t cover this area unless by request, it can’t possibly overlap with one of our tours. 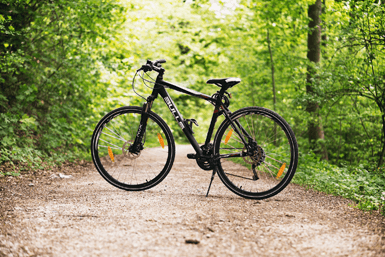 If you are traveling with teens, surprise them with a graffiti tour by bike. They’ll surely love it: two things that kids usually love (bikes and hip-hop culture) together in a 3 or 5 hour tour. And we like that they use environmental-friendly bikes made out of bamboo – how cool is that?

Their Poblenou itinerary is unlikely to overlap with our tours, since we only cover it in our Contemporary Architecture tours. And while the Raval and Born districts can be visited in our Old Town tour, we visit these areas from a totally different perspective (architectural and historical), it wouldn’t feel at all like overlapping even if you were taken once or twice down the same alleys.

OK, yes, we do run Wine Tours, and unless you told us what exact cellars you’d be visiting there’d be a small chance of taking you to the same place twice. But not many people are likely to book two different wine tours, one biking and one chauffeured, isn’t it? So if the thought of biking across the vineyards of the Penedes Wine Country appeals to you, go ahead! Book your wine country bike tour, and leave the city tours for us – no overlapping danger, then.

AND BONUS! Shouldn’t you just use one of those Bicing bikes I mentioned at the beginning of the post?

Who can use Bicing?

When back in 2007 the City Council decided to start a public bike service, they first encountered a strong opposition from the local bike rental businesses that were scared it could take them to bankrupt… So after long and difficult negotiations, they reached an agreement on that Bicing should only be available for locals as a mean of public transportation, but not for visitors or leisure activities. 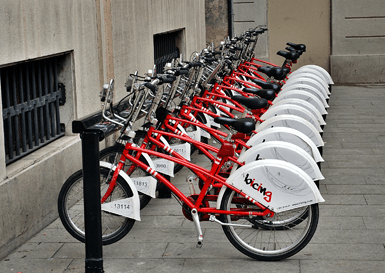 And how to you ensure that? First of all, you need to register online and pay a year fee with a Spanish credit card. Then days later you receive via regular mail the card that is used to unlock the bikes from the stations: local addresses are accepted by the server.

Moreover, bikes can only be used for upto 2 hours in a row – the first 30 minutes being for free as part of your yearly fee, the rest of the time is charged to the credit card used to make the registration. Using the bike for longer than 2 hours is heavily taxed and penalized.

What Barcelona bike tours would you like to take?