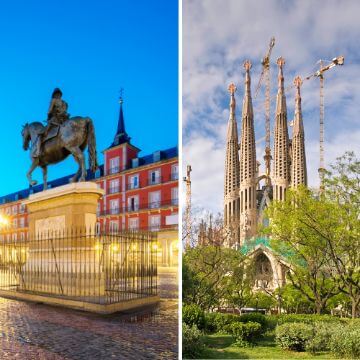 Should You Travel To Barcelona Versus Madrid?

Did you know I’ve been blogging since 2012 pretty much weekly except for last year that for a variety of reasons I couldn’t keep up with my posting plans? That’s many years of blog posts… And coming up with ideas sometimes gets hard.

But some time ago I had an idea that would allow me to learn things as I’d need to research, but it’ll also allow me to personalize my tour explanations: comparing Barcelona with other areas around the world! My friend Gemma from Madrid Cool and Cultural does it a lot for her American customers, since she’s lived and worked in Boston, and our tour guide Miriam loves to compare the Barcelona sites with other European landmarks that visitors might be familiar with. So that’s my opportunity to up my game too! Want to join me?

Today I'm starting my series of Barcelona versus the world, and the city I chose to start with had to be our "eternal rival"... Madrid, of course! And I say this with all my love, because there might be so many differences between both metropolis, but we'll always complement each other. Let's see how!
HAVE YOU CONSIDERED TAKING A PRIVATE TOUR OF BARCELONA?

Points to consider when choosing between a Barcelona or Madrid vacation:

Size matters. Madrid doubles the number of citizens of Barcelona and quintuples its surface.  In recent decades Madrid has been absorbing different municipalities around it. Being on the central plateau of the Iberian Peninsula it does not seem that its growth will slow down due to geographical accidents, not being limited by sea or mountains.

Barcelona, on the other hand, cannot grow beyond its current extension, which limits the growth of its population. But this apparent handicap makes it a city suitable for walking or cycling, with acceptable distances between its various sites of interest.

Madrid citizens will always have a reason to envy Barcelonans. While Barcelona has several miles of sunny Mediterranean beaches, a great tradition of seafood cuisine and one of the most important ports in the world, Madrid has to settle for a modern, newly created urban beach on the banks of the Manzanares River.
Madrid people are so ashamed for that, that during the famous Madrid cultural movement of the 80s “La Movida”, a local band called Los Refrescos composed the Summer hit “Aquí no hay playa” (There is no beach here) making fun (and complaining to the mayor) about it .
PRIVATE DAY TRIPS TO COSTA BRAVA BEACH

Despite Madrid was founded in the Middle Ages by the Arabs as a military fortress, it was not until the 16th century when the Royal Court established there and made it a capital city. In the 18th century, King Carlos III reformed and sanitized the entire city, giving it the structure of large avenues and royal buildings that we know today. A city made for the national institutions, its urban landscape is dominated by official buildings such as the Royal Palace, the different headquarters of the ministries, the Congress of Deputies…

Instead, the history of Barcelona started with the Iberians and the Romans more than 2000 years ago, to flourish during the Middle Ages becoming an important commercial hub. Some centuries of a certain decline followed the adhesion to the Spanish Empire, but Barcelona was reborn as a commercial power in the 19th century thanks to the industrial revolution. Our architecture helps you read our history: from Roman ruins, to Gothic churches and mansions, to beautiful modernist buildings that the bourgeoisie had built during the 1900’s (with the works of Gaudí in the lead). A city made by the people for its people, a city for architecture lovers.

Madrid is a huge destination for museum lovers. Its Prado Museum has been considered on several occasions the largest in the world. On its walls hang the works of Velázquez, Rubens, Caravaggio, Vermeer, Goya, Tiziano and Rembrand among many other great masters. Some of the great painters of the twentieth century, such as Picasso or Dalí, spent part of their training years walking through its galleries.
EDUCATED PRIVATE MUSEUM TOURS OF BARCELONA

And there’s also the Thyssen-Bornemisza Museum with works by Gauguin, Klee, Canaletto, Fragonard … and the Reina Sofía Museum of Modern Art featuring the famous “Guernica” by Picasso.

Instead, the Barcelona Museums are somehow more themed. A Picasso Museum mostly focused on his early and very late works, and a Miro Foundation covering pretty much the entire evolution of the artist. Without forgetting the Dali Theater Museum, just 1.5 hours drive outside of the city.

And while the MNAC museum would be a must in many smaller cities with a more reduced offer, it’s not big enough to rival with the Prado and it mostly attracts visitors with a special interest in their unique (but difficult for the non-initiated) Romanesque fresco collection. And the MACBA Museum of Contemporary Art is unfortunately not what you’d expect for a city like Barcelona…

Despite being in the same country, the cultural differences between Barcelona and Madrid are remarkable. And language is a big one. In addition to Spanish, the language common to the entire state, Barcelona, as the capital of Catalonia, has Catalan as its own language – not a dialect. In general, Barcelona people tend to match less the Spanish stereotypes foreigners believe about our country.

Take bullfighting, for instance: While in Madrid there is a strong love for bullfighting in Barcelona, they have been banned for a few years. One of the main bullring in the city, Las Arenas, became a commercial center. However, in Madrid it is common to find bars and restaurants decorated with bullfighting posters and serving dishes such as the “rabo de toro” (oxtail). But one thing unites us (and keeps us apart at the same time): we all love soccer, despite each city teams will be eternal enemies: FC Barcelona vs Real Madrid CF.

AND BONUS! One more thing in the Madrid or Barcelona dilema:

In 1992 Barcelona hosted the Olympic Games, and in preparation for that took place a huge urban renovation of the city, with the contribution of architecture rockstars such as Calatrava, Norman Foster and Arata Isozaki.

There’s a before and an after the Olympics in Barcelona, and that can be still felt today when visiting the Montjuic Hill or the waterfront. Instead, Madrid has been nominated up to three times to host the Olympic Games, to no success.

VISIT THE OLYMPIC SITES IN MONTJUIC WITH US

Would you travel to Madrid vs Barcelona? What's your favorite city?