Spain versus Mexico for travel

Differences and similarities of Mexico vs Spain

Are Mexico and Spain different? Oh yes, they are! And each country offers very different wonders that will appeal to different tyypes of visitors. Today we are analazying the similarities and differences of Spain versus Mexico, so you can chose which is the right destination for you. 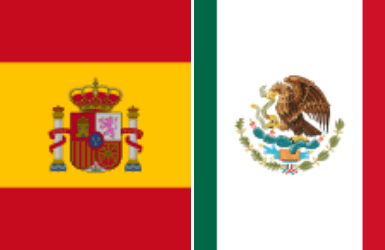 But first, let me give you a bit of background. Mexico was colonized by the Spanish conquistadores led by Hernan Cortes in the early 1500’s, and that was the end of the native cultures. Those had included empires such as the Mayan and the Aztec among others. The Spanish dominance ended after the Mexican Independence War in 1810.

Mexico and Spain are located in different continents: Mexico in America, Spain in Europe. Mexico is almost four times bigger than Spain: 1,964,375 km² (758,449.4 miles) vs 505,990 km² (195,360 sq mi). The population of Mexico is also larger than the Spanish population: 128.6 million, more than 9 of them living in the capital city, Ciudad de Mexico. Spain counts 47.4 million people, and the largest cities are also much smaller: Madrid with 3.2 million and Barcelona with 1.8 million.

Things you need to know to decide between Mexico and Spain for your next trip:

Do people in Mexico and Spain speak the same language?

Generally speaking, yes. The official language of both countries is Spanish. If you speak Spanish, no matter where your teachers were from, you’ll be able communicate in both countries. But the answer is not that simple. 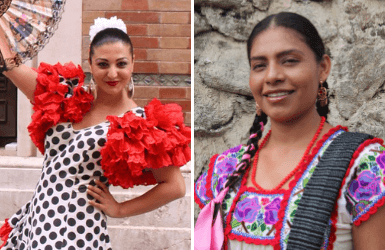 There are differences between Mexican Spanish and Spanish from Spain. Just like American English doesn’t sound like British English, the accents used in Mexico and Spain are different too. One of the most noticeable differences is that in Mexico the letters S and Z, as well as C in front of E and I are pronounced as an E, while in Spain S sounds like S, and Z and C in front of E and I sound like TH. There’s exceptions in some areas of Andalusia, South of Spain.

Another remarkable difference is that in Spain we use “tu” and “vosotros” in an informal relationship setting, but we use “usted” and “ustedes” when we want to express respect in a formal situation. Instead, in Mexico they always use the “usted/es” form, no matter the situation.

And just like in American English people say “cookies” instead of “biscuits”, there’s a variety of words that are used differently in Spain and Mexico. “Conducir un coche” (Spain) vs “manejar un carro” (Mexico) for driving a car. Or “patata” (Spain) vs “papa” (Mexico) for potato. You can carelessly use the verb “coger” in Spanish when you are taking or catching something. But in Mexico make sure to say “agarrar” or “tomar”, or they’ll think you are having a sexual intercourse (ouch!).

You’ll see many much more English influence in Mexican Spanish, because it’s so close to the USA. The Spanish from Spain or “Castilian” is supposed to be more “pure”, because that’s where the language originated. Mexican Spanish also receives a lot of influence from native languages like Náhuatl (“Aztec”).

By the way, there’s 68 indigenous languages spoken in Mexico besides the “imported” Spanish, but only 7% of the population speaks at least one of them. English is surprisingly the second most spoken language there. Instead, in Spain there’s 3 more languages with official status: Catalan, Basque (Euskera) and Galician (Galego), plus a handful of other minority local tongues. English is learned at school as a foreign language and most people aren’t fluent in it, but most people working in tourism and business usually speak it well enough.

The traditional foods of Mexico and Spain are VERY different. And what you’ll notice immediately is that food in Mexico is very spicy, but in Spain it isn’t. The Mexican cuisine uses hot chilies a lot, whereas in Spain the hottest points are given by garlic and occasional hot paprika. 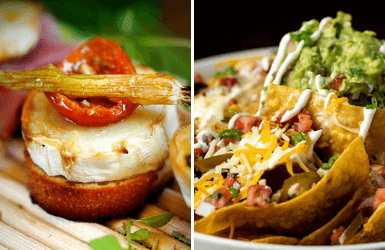 Cilantro is an important herb for Mexicans, while in Spain are used Mediterranean herbs such as rosemary, thyme, sage and oregano. Mexicans use corn tortillas, while in Spain tortillas are… omelets. To scrape their plates Spaniards use wheat breads. Black beans are typical in the Mexican diet, but lentils and chickpeas are more common in Spain. Ground meat is often used in Mexican cuisine, and in Spain cured meats and sausages are a staple. Fresh fish and seafood of all kinds are also more prevalent in the Spanish cooking than in Mexico.

As for beverages, in Mexico highly alcoholic drinks such as tequila and mezcal are popular, while in Spain wine and sparkling are the norm, along with some local brandy. Beer is a common favorite. Interestingly, horchata in Spain is made with tigernut, while the Mexican version is made with rice.

Mexico is a world-class beach destination. You can swim with dolphins in the classy Puerto Vallarta. Or you can head to the riviera maya for an exceptional reef diving and snorkeling offer. Cozumel, Cancun (with even an underwater museum) and Cabo San Lucas (this last one also famous for its golf courts). Palm trees, fine white sand and crystal-clear waters are the norm. 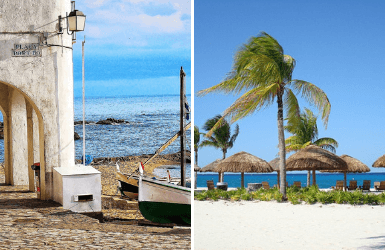 Costa del Sol in Andalusia, Costa Blanca in Valencia and Costa Daurada in Catalonia offer sandy beaches in either fishing villages or urban resorts. Costa Brava, North of Barcelona, and the Balearic Islands (Majorca, Minorca, Ibiza) have scenic inlets surrounded by rocky cliffs and pine tree woods. And the Northern coast on the Cantabric sea features landscapes that will remind you of Scotland and Ireland: very scenic, with cold waters all year around.

The Spanish land has been intensely used by human kind for centuries. As a result, nature has suffered and our country doesn’t offer many opportunities to be amazed by the big wild. Bird lovers will be delighted by the Doñana national park, although the area is currently struggling due to drought. 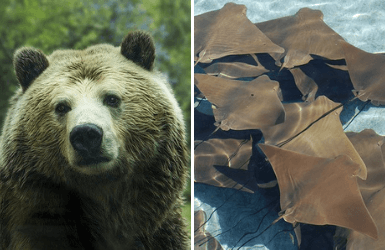 The Picos de Europa in the North of Spain are a sanctuary for bears (hated by the shepherds in the Pyrenees, on the contrary), and there’s a handful of wolves packs too. The iconic lynx is recovering in the South of Spain. There’s Alpine nature in the Pyrenees with the Ordesa – Monte Perdido and the Aiguestortes – Sant Maurici lake National Parks.

But to find something similar to Mexico you’ll have to go the Canary Islands, where its more tropical climate and more isolated location has allowed for lavish natural areas such as La Gomera, Teide and the Caldera de Taburiente.

Instead, Mexico offers a fascinating natural offer. Starting with the Monarch butterfly reserve, and continuing with the Whale Sanctuary of Vizcaino, Mexico is a great destination for animal lovers. You’ll also find giant manta rays in the Revillagigedo archipelago. And Jaguars, Pumas, Ocelots and Central American Tapirs in Sian Ka’an. That’s not to speak about the many coral reefs along the Mexican coast.

Spanish museums are all about art. In Madrid, the Prado Museum displays the Spanish Royal collections including Spanish artists such as Goya and Velazquez, but also European masters such as Rubens, Rembrandt, El Bosco, Tiziano, Rafaello… And at the nearby Museo Reina Sofia Picasso’s Gernika will blow your mind. 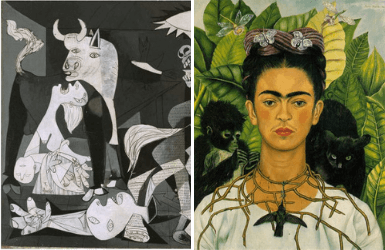 Barcelona will be the next destination for Picasso lovers: its Picasso Museum is a unique opportunity to discover the origins of the artist. And also Joan Miro has its main museum there. Just 1.5 hour drive outside of the city, visiting the Salvador Dali Theater Museum is a challenge to think out of the box.

The art museums offer in Mexico is limited. There’s the unmissable Frida Kahlo, the frescoes in the Palacio de las Bellas Artes, as well as the Museo Soumaya. But in exchange there’s an exciting array of other type of educational museums: the National Museum of Anthropology, the Museo Nacional de la Muerte (on Mexican death iconography), the National Museum of History, the Mummy Museum in Guanajuato, the Mayan Museum in Merida…

And how do compare Mexico vs Spain on tourists sites?

Spain versus Mexico for travel

Let’s start by saying that Spain has 42 sites declared Human Heritage by UNESCO, and Mexico… only 27! But that doesn’t mean the Mexican offer is poor. On the contrary: Mexico has impressive sites such as the ruins of Chichen Itza, the pyramids of Teotihuacan, El Tajín and Uxmal… 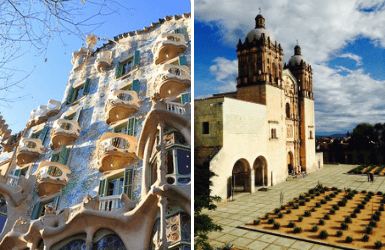 But the rest of Mexican sites mostly revolves around colonial architecture. You can spend endless hours strolling around the beautiful historical centers of Mexico City, Morelia, Oaxaca, Puebla… Or visit the missions in Querétaro or the monasteries in Popocatepetl.

The point I want to make is that Spain offers a much broader variety of styles and historical periods. You can start with the prehistorian times with the archaeological site of Atapuerca or the cave paintings of Altamira. Then continue with Roman sites all over the mainland: Tarragona, Merida, the aqueduct in Segovia, and the Hercules Tower in Galicia, just to name a few.

The moors populated the South of Spain during 800 years, and that has left us architectural beauties such as the Cordoba mosque and the Alhambra palace in Granada.

And the Middle Ages left Spain sprinkled with impressive monasteries and medieval towns where time seems to have stopped. If that’s your thing, don’t miss the imposing city of Toledo, the Cathedral of Burgos, the humble but perfect Romanesque churches in the Taull Valley of the Pyrenees, the monasteries of San Millan de la Cogolla, Suso and Poblet…

And the early 1900’s left unique examples of Art Nouveau (“modernism”) in Barcelona, by the hand of masters such as Puig i Cadafalch, Domenech i Muntaner and the indescribable Antoni Gaudi.

So what's your personal choice: Mexico or Spain?