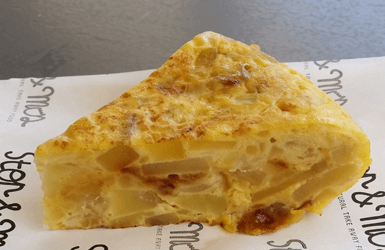 We love eggs, in Spain! And, no they aren’t considered breakfast food: they have a place with some of the favorite tapas and main courses here. We cook them often, and everyone enjoys them. And no, egg benedict aren’t popular: they are seen as that fancy type of egg you get when you go (as a special thing) out for a brunch (because brunch isn’t common here, either, but a hipster trend).

So today we want to share with you our favorite recipes, so you make sure to order them when you see them at the restaurant or the tapas bar for lunch or dinner during your next trip to Spain. Ready to discover how we make eggs in Spain? Keep reading and good appetite!

This is our Spanish eggs dish selection:

The Spanish egg tortilla mustn’t be confused with the Mexican corn tortilla. A Spanish omelette is made with eggs, fried potatoes and caramelized onions. Some people might also add some chorizo or sobrassada (a pork spread from Mallorca), and maybe some green peppers, but that’s not the norm. Picky eaters will skip the onion, but then it’s not as good. No house wife is considered good enough if she can’t make a decent tortilla, and no informal party or meal is complete without one. We probably eat it at least once a week! So make sure to try some during your trip (several times!). We love the one at Xampanyet: it’s the closest thing to my mom’s tortilla – which is, of course, the best in the world.

Fried eggs are often found as the main component of “plato combinado” – a one-course meal that is popular in cheap restaurants in the city as well as by the beach, and that usually includes some protein plus a couple of side dishes. At home, it makes a quick meal that children love, specially when they are allowed to dip French fries on them. Many people like them “con puntillita”, which is a word that usually refers to lacery work, but here means that crisp golden edging around the fried egg that appears when it’s made in very hot olive oil. If you ever go to the Boqueria Market, make sure to seat at the bar of El Quim and try his specialties: beside the mushroom ones, he makes some delicious fried eggs with llangueta (a tiny local fish – only when it’s in season) and baby calamari (that despite sounding like a quite weird combination, they are the most amazing thing ever). 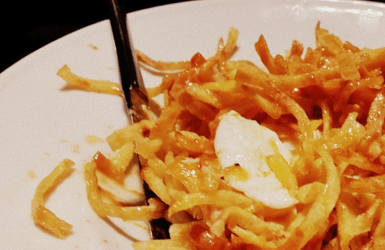 The Spanish style baked eggs are commonly served in humble family-owned restaurants and in the countryside, as a main course. They come on a clay dish, usually baked with some toppings such as tomato sauce (like the huevos a la flamenca, so popular in Andalusia and the South of Spain, that also incorporate green peas and optionally other veggies), sobrassada (the pork spread we mentioned before) or melted cheese. It was one of my childhood favorites! And I continue making it at home from time to time: To avoid the egg from sticking to the dish, it must be greased first with some butter or lard. Then throw in the eggs without whisking them, and add whatever toppings you’ve choosen. Put in the oven at very hot temperature until the whites are cooked. It’s eaten with bread and a little spoon to wipe clean what the bread can’t scrape out.

The Spanish style scrambled eggs are usually served with toppings such as seasonal veggies (mushrooms are an absolute winner, but green asparagus or green garlic work also great). The trick to make them really creamy isn’t to add milk – that would be cheating, but to wait to break the yolk until the egg white is cooked. That’s how you’ll get that beautiful texture that isn’t neither too dry nor too soggy: just that perfect runny touch. By the way, did you know the famous song Yesterday by the Beatles was originally going to be called “Scrambled eggs”? I don’t have enough space here to tell you the whole story, but go ahead and google it: it’s so weird they wanted to rhyme it with “I love your legs”! LOL.

Smashed or broken eggs are fried eggs that are broken and mixed up with potatoes and other optional toppings when served to the client. The most famous in Spain are decidedly those from Casa Lucio, in Madrid, cooked over easy and served with Spanish ham besides the potatoes. In Barcelona we love the version from Cerveseria Catalana and its sister restaurants, Ciudad Condal and Vinitus: they call them “huevos cabreados”, “angry eggs” because… they are slightly spicy. The fried eggs are served on top of a bed of straw fries sprinkled with a spicy oil, red from paprika. Jus remember that Spain isn’t Mexico, and what for us is spicy, for Mexican and other hot food loving contries is not. I love how the egg yolk mixes in with the sauce when the waiter breaks them. Yum!

AND BONUS!  What’s the Spanish egg dish everyone loves for desert? 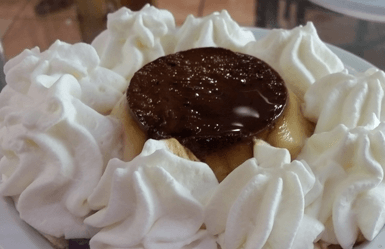 You might know it by its French name, “crème caramel”. This delicious dessert is easy to find in supermarkets, and many families will make their own as a special treat: my mom has kept my grandmother’s recipe! It’s really easy and it’s mostly made with eggs, milk and sugar. If you aren’t too good at cooking, though, it’s also a staple in most restaurants dessert menu: we love the ones at Granja La Pallaresa, in Petritxol street, where besides an amazing hot chocolate with churros they also have wonderful desserts made with dairy such as the Mató de Pedralbes, a hard to find very rich dessert that is mix of flan and cottage cheese.

So what about you? Head to the comments below and tells us: What’s your favorite Spanish eggs recipe?