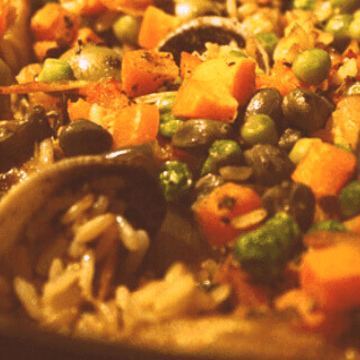 EVERYTHING YOU NEED TO KNOW ABOUT THE SPANISH RICE DISHES

We love rice! It can be cooked in a thousand different ways and it goes well with nearly every type of food. Lots of cultures have used rice as a basic ingredient and have their own unique way of cooking it.

In Catalonia we have grown it traditional in marshal areas such as Pals, and river deltas like the Ebro one. And the region of Valencia is also famous for it. It is not surprising that rice is so popular in Spain.

This is our list of top Spanish rice recipes:

Paella is undeniably the most famous traditional Spanish rice recipe. Although it originally comes from the region of Valencia, you can find it pretty much everywhere, specially by the coast. According to Valencians, the “real thing” is made with rice, chicken, rabbit, saffron, beans and… escargots!

However, that type of paella is difficult to find outside of Valencia. In the rest of Spain seafood paella is king, and it’s also easy to find meat paella, veggie paella and “paella mixta” (that includes some meat, some seafood and some veggies). If you can only try one rice dish during your trip, then make it this one. But if you have the opportunity to try other recipes, or if that’s not your first trip to Spain and you’ve already tried a real paella, then make sure to keep reading.

The name of this dish means soupy rice, and that’s because this Spanish rice casserole is cooked in a deep pan with a lot of broth so when it’s done, it’s like a rice soup, not dry like a paella. It is made with the same type of rice used for paella: arròs bomba. The basic ingredients are rice, meat, garlic, vegetables as artichokes, green beans, potatoes…

While paella was the evolution of fishermen meals, arròs caldós is the evolution of farm meals, and that’s why meat and veggies are the main ingredients, although now seafood and fish have become also popular toppings. In Barcelona, I recommend that of Botafumeiro made with lobster: my dad and my brother are absolute fans of it!

Or Arròs negre in Catalan, black rice is similar to paella but what makes it different is its color: black, obtained from the addition of squid ink. If you are adventurous enough, it won’t be hard to find rice restaurants in Barcelona where you can try it, but we recommend Elche in the Poblesec district. By the way, you might want to know that in the beautiful Empordà county they make a black rice without ink. 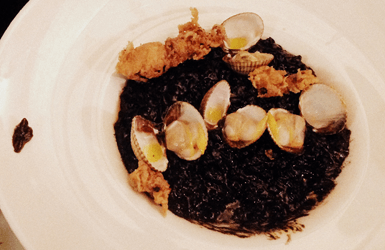 Instead, they stir-fry onion and tomato for a very long time until they reach a point when they are just about to get burnt… but they aren’t yet. It takes lots of patience and experience to make it the right way, but gosh! It’s delicious! Too bad it isn’t easy to find in Barcelona and you’ll have to ride 2 hours North of Barcelona to find it. In any case, both versions use squid or cuttlefish as the main ingredient that goes with the rice.

This Catalan recipe is made in a casserole rather than a paella pan as they do in the Valencia area, hence its name. It is also known as arròs del tros (estate rice) and arròs de pagès (farmer’s rice) because of its basic ingredients typical from the countryside: rice and meats (either rabbit, chicken, pork chops or sausages), plus often green beans, mushrooms, artichokes and other veggies that typically vary depending on what’s in season.

More modernly fish or seafood such as squid or cuttlefish have also been added to taste. This recipe is harder to find in restaurants, but is very popular in private homes: my mom used to make it every weekend.

Traditionally, people would make a very intense fish broth that would be served as a soup with potatoes, then in the left overs of the broth would be cooked the rice and served aside: this way fishermen would get two courses out of one single cooking process.

Another variety of this would be the “arròs del senyoret” (or del señorito), where the fish bones and the shells of the seafood are removed and as a result, it’s easier and more “elegant” to eat – a rice for young gentleman (the “senyoret”).

AND BONUS! Here is the noodle alternative to paella:

Noodle paella is another typical dish from Valencia. The legend says that the captain of a fishing boat would eat all the rice they cooked on board and leave nothing to the sailors, who decided to cook with noodles instead hoping the captain wouldn’t like it so much. That resulted in this dish made with noodles and fish or seafood in a paella pan and boiled in fish broth, often served with lemon or aioli garlic sauce. 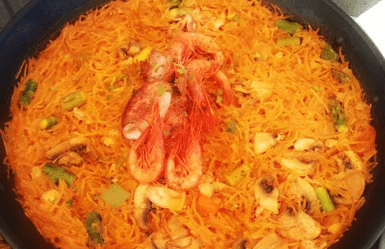 It is then baked in the oven, what will make the ends of the noodles rice up and brown. In Catalan, noodle is called “fideu”, so a “fideuà” is actually a dish with “loads of noodles”.

What is your favorite Spanish rice casserole?