HOW MANY SPANISH FISH DISHES DO YOU KNOW?

FROM FISH STEW TO FISH SOUP AND MORE: THESE ARE OUR FAVORITE FISH DISHES 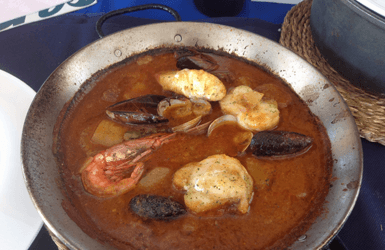 Ordering a Spanish style fish dish can be tricky, after all, translating fish names is one of the hardest endeavors any traveler has to face when ordering food. And it’s such a shame that often visitors miss out on the delicious Spanish fish dishes out of fear of ordering the wrong (too adventurous) thing. I’ve seen it often, either eating out with my guests, or simply taking them touring the food market.

So the other day I thought it’d make a good post to share with you what are the most popular so you can order confidently your fish stew or dish in your favorite seafood restaurants, and above all, have a wonderful experience eating our local fish dishes. So here you go, good appetite!

Make sure to try this Spanish-style fish recipes when you come to Spain:

It’s a very appreciated white fish, very tasty and with a hard meat similar to lobster. It’s often cooked with potatoes or as part of a fish stew. You can recognize it in a fish market because it has a big, flat brownish body with a huge mouth and a long tail. Quite ugly and scary! It is often used for fish stew, and its bones make a delicious fish stock.

It’s considered a white fish when it’s fresh, but when it has been dried and salted it becomes a blue fish. It was very appreciated in the old times, when salted cod was the only fish people living inland could get, as it was easy to store. In the other hand, when Catholicism forbid to eat meat during Lent, people started transforming their meat recipes into cod recipes. As a result, nowadays there are hundreds of Spanish cod fish recipes. These are the most popular ones: A la llauna, a la Bilbaina, a la Riojana, cod with honey, Pil-pil cod, cod fritters… Don’t hesitate to order them if you see them in the menu. 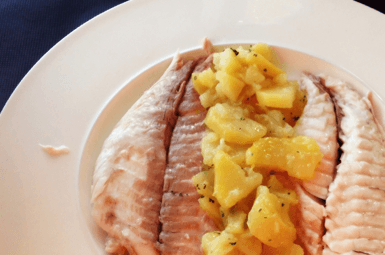 It’s a very famous fish that we can find it nearly in all the Mediterranean coast, and in the Atlantic from Great Britain to Cape Verde. It’s so popular it’s often farmed in fish farms, but it can also be found wild in the local markets. Our favorite recipe is Dorada a la Sal: covered in a salt crust and baked in the oven. Yum!

Anchovy is a little forage fish that it’s usually salted in brine first, then packed in oil. When they’ve been prepared like this, they are brown. However, in Spain we also like to pickle them in vinager, in which case they become white and we call them Boquerones. In both cases, they are great served them as a tapa or on a toast.

A really appreciated fish for its culinary value and for recreational fishing. Together with salmon, it was one of the first types of fish to be farmed. Its lovely flavor doesn’t need much seasoning: just baked in the oven with some potatoes and vegetables it is awesome!

AND BONUS! What about all those fish stew dishes with exotic names? 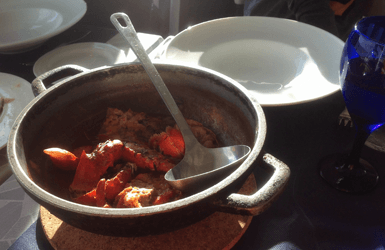 These are the best fish recipes in Spain:

Zarzuela: very popular in coastal zones where fresh fish is available, it is a seafood and fish stew served with a nuts and almond sauce called picada.

Fish caldereta is such a simple dish that it used to be considered “food for the poor”, and now it’s become a quite expensive one! It’s done in a reduction of water, oil, wine and vegetables. Probably the most popular Spanish style fish soup.


Marmitako is popular Basque country tuna dish. Tuna fishermen came up with the recipe during their fishing trips. It’s made with potatoes, pepper, onion and tomatoes. The most popular way to cook tuna!

Suquet was very popular among fisherman in the Catalan and Valencian coast. When fisherman finished their long workday, they used to prepare this stew dish with all the fish that could not be sold. It’s the most appreciated fish stew in our area.

So what about you? Head to the comments below and tells us: what are your favorite Spanish fish dishes?