The Santa Eulalia Festival Is Here! 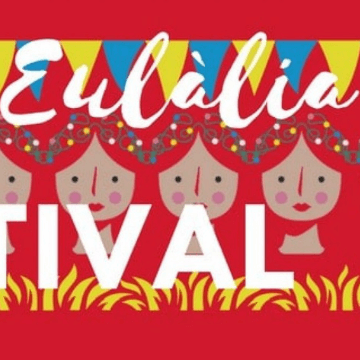 CELEBRATE THE FESTA MAJOR DE SANTA EULALIA WITH THE LOCALS

Saint Eulàlia of Barcelona (or popularly called Laia) was the first patron saint of Barcelona, until she was deposed by Our Lady of Mercy, la Mercè. However, her day is still celebrated in town, with her festival being the minor winter festival of the city. And even nowadays, Eulàlia and Laia continue to be common girl names in Barcelona.

If you are in town around February 12, you are lucky! There’ll be traditional celebrations around the Old Town, as well as other cultural and festive activities around the city – maybe not as busy as La Mercè in September, but fun enough to check!

But first of all, who was Saint Eulàlia? According to the legend, Eulalia was a 13yo girl that lived in the Barcelona area (traditionally in what now is the uptown district of Sarrià) in the third century. A fervent Christian, she refused to adore the Roman gods and because of that she was tortured 13 times, one for each year she was old, in the most horrific ways, until she was finally killed.

She was buried in a secret Christian cemetery outside of the city, where later on was raised the Church of Santa Maria de les Arenes (now Santa Maria del Mar). Her remains were found by miracle by the bishop Frodoí in 878 and moved to the Cathedral, where she continues to lay in a beautiful sarcophagus in the crypt under the altar.

There are 13 geese in the cloister of the Cathedral because she was 13yo when she was martyred. Very close to the cloister gate there’s a street called “Baixada de Santa Eulàlia”, where it is said that the Romans put her in a barrel full of broken glass and nails and thrown downhill – the name of the street meaning precisely the Slope Down of St. Eulàlia. In a corner of that street you’ll see a small shrine dedicated to her, often surrounded by (plastic) flowers and the occasional candles.
EXPLORE THE GOTHIC QUARTER WITH US

These are the essentials to enjoy and understand this Barcelona Winter Festival:

Eulàlia – a show in the Cathedral

Since 2013 on the occasional of the Festival, the Esbart Ciutat Comtal, a local team of Catalan folk dancers, performs a show inside the Cathedral on top of the Crypt where she is buried. The show represents in 10 scenes the saint’s life and martyrdom, the transfer of her body to the Cathedral and her becoming the city’s patron saint, using music and dance to make stand out values such as freedom, equality and justice. The set design has won local awards, and it is inspired in other traditional Catalan folkloric religious shows.

There’s one more in-church dancing taking place during the Festival: the city’s Eagle (a card-board eagle sculpture carried by a dancer hidden inside it) parades the Old Town streets all the way to Santa Maria del Mar (in the grounds of which St. Eulàlia had been originally buried), where it’ll perform a very old dance that was once only offered to very important visitors. The Eagle was the only traditional “beast” that was allowed to dance inside churches in the middle ages.

Any Catalan festival has to include a traditional Giants parade. Made out of cardboard and dressed with carefully designed robes, they are several feet taller than humans and they walk the streets to the tune of festive bands, stopping to dance simple routines at specific points.

Any local district, village or town is proud to have their own couple of male and female giants, but you’ll also occasionally see them single: that’s the case of the Giant Laia (technically not a pure “geganta“, but a “gegantona” or little giant, because she’s shorter than the average).

She represents a 13yo girl, dressed in the Roman times fashion, holding a palm leave (Christian symbol of martyrdom) and an X-shaped cross (where she was crucified, as story says). She resides in the patio of the Palau de la Virreina in the heart of La Rambla, only exiting it to participate in the parades and other important events of her festival. Because she’s not as a heavy giant, it’s kids (not adults) who have the honor to carry her around.

The Bandera or Penó of Saint Eulàlia has been since the mid 1500’s a very respected city symbol: a crimson flag with the saint’s image next to the coat of arms of Barcelona and that of the Cathedral. In the old times, it would only leave the rooms of the City Hall when the city was in big peril – one of the most famous moments being the War of Succession in 1714, when councilor Rafael de Casanova carried it to encourage and lead the locals in the last battle before the city was defeated.

Unfortunately, that one was confiscated after the defeat and later on burnt in public following orders of king Philip the V. The current Standard dates only from 1983, and is the one that is displayed in the balcony of the City Hall for the Festival in after a ceremony presided by the Major during which is sang the Segadors Catalan anthem, as the local police salute dressed in their gala uniforms).

Since 2012 a Festival of Lights has been added to the activities that celebrate the Barcelona Winter Festival (Festa Major d’Hivern). It consists of a selection of urban spaces and architecture that are illuminated at night by artists, designers and local art students. The shows take place after dark, and they range from light installations to spectacular mappings and interactive performances.

It is recommended to check the official website to locate the ones you’ll be interested in experiencing or at least figure out the area where you can find them and then wander around the streets enjoying the feeling of being surprised and mixing in with the locals.

As a tribute to the Patron Saint of Barcelona, on February 12 some local museum are open for free: the Picasso Museum, the Miro Foundation, the Roman ruins at the MUHBA, the Tàpies Fund, the Monastery of Pedralbes and Palau Güell. Besides them, the Barcelona City Hall, Ajuntament de Barcelona, is also open for visitors – which is a very unique opportunity to go inside it, as it’s usually not open to visitors unless you are attending a wedding or public event. It’s only a handful of days a year that like February 12 the City Hall opens its doors to everyone.

The Festival of Saint Eulàlia includes many more activities: human castles, fire runs, traditional music and dancing, children shows… You can check their complete program in the official website.

AND BONUS! Would you like to know why Saint Eulàlia stopped being the main patron saint of Barcelona? This is the duel between Eulàlia and Our Lady of Mercy:

Saint Eulàlia became the first patron saint of Barcelona as a recognition of the horrors this local young girl went through to defend her faith. However in 1687 a plague of locusts was devastating the harvests in Catalonia – prove that locust plagues used to terrify the population is the gargoyle in the Palau del Lloctinent representing a locust next to monsters and devils…

A BARRI GOTIC TOUR FULL OF HISTORY AND LEGENDS

As the plague approached the city of Barcelona, the Council of the One Hundred (a medieval institution from which would derive the current City Council), turned to Our Lady of Mercy asking for help and promising to make her patron saint of the city if she saved them. The plague left the city, and the locals started celebrating her day yearly, even if the Pope’s approval wouldn’t arrive until almost 2 centuries later in 1868. It seems that Saint Eulàlia didn’t take it well: every year during the festivity of Our Lady of Mercy (September 24) it rains at some point, and the locals assure it’s the tears of Eulàlia for not being the main patron saint of the city anymore!

Would you like to attend the Festival of Saint Eulàlia?