Top Things To Do In Tarragona 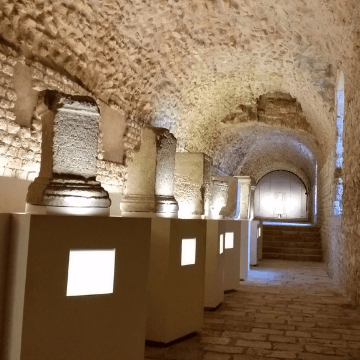 South of Catalonia we find one of the most historical cities in our country: When  you visit Tarragona you travel back to Roman times. The city was founded in the III bc century by the Romans, and there are still lots of evidences of their legacy. The city was then called Tarraco in latin, and it became the capital of a huge province and and the successive and frequent visits of Roman emperors helped filling it with impressive structures, now ruins declared Human Heritage by the UNESCO.

So most of the sights to visit in Tarragona are Roman ruins, of course, but there are some more interesting attractions that you shouldn’t miss. In today’s post we are giving you plenty of ideas for when you visit Tarragona.
COME TO TARRAGONA WITH US

Here is what to do in Tarragona:

The roman walls have have been there for 22 centuries, as they were one of the first constructions made by the Romans in the city after their arrival to the Iberian Peninsula in 218 bC, when the city became a Roman military base during the Second Punic War. As the city grew in importance, the walls were reinforced and improved. And through the history they kept their military function and continued to be used during the Middle Ages and other wars.

The entrance is pretty cheap, and it offers you a relaxing yet interesting walk along the walls in a tidy Mediterranean garden with views over the valley that surrounds Tarragona. You’ll also find here Roman sculptures and columns of the Roman forum that were found in archaeological excavations in the area.

The oldest museum in Catalunya of this specialty, it preserves ruins and artifacts from the Roman times found in archaeological excavations in the area. We love an ancient articulated doll, some curious sexual amulets and the star of the museum: the mosaic of Medusa.

Among the many other objects, capitals, sculptures, mosaics and amphorae, you’ll also get to see a piece of what’s considered the longest Roman add ever found: an inscription about how the Roman emperor Heliogabal ordered the restoration of the amphitheater of Tarraco. Plan a couple of hours to see the collection in detail and cover its 4 floors at ease (or if you are in a hurry or just want to have a quick look, some 30 minutes will be enough for you).

The Cathedral of Tarragona was built in the highest part of the old city, where recently has been finally confirmed that the Roman Temple used to stand. Its construction was started in the 1200’s in Romanesque style and it was finished in the 1300’s when the Gothic style was the main architectural movement, that’s why the transition from one style to the other is quite clear in its architecture. 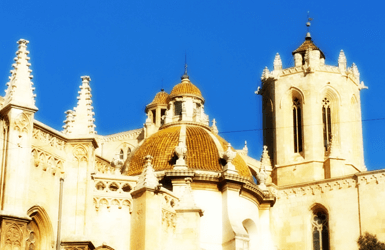 TARRAGONA AND SITGES WITH US

The inside is pretty impressive: with its high walls and silent dusty chapels. Don’t miss its beautiful cloister with decorated capitals (a very famous one displays the story of how a cat managed to kill of the rats of the city by faking he was dead), and the chapel where the relics of Saint Tecla, patron saint of Tarragona, are kept. She was said to be a follower (some even dare to say girlfriend) or Saint Paul, who was finally tortured in many ways by the Romans until she was finally killed. Her story is explained in the relieves of the big altarpiece.

The Tarraco Roman circus was built in the first century and was 325 meters long, with an estimated capacity of 30.000 people. Chariots pulled by two or four horses raced here, belonging to the 4 local teams each one wearing a color representing one of the seasons of the year. It was one of the favorite shows of the Roman society. Its ruins are considered one of the most well preserved circuses in the Western Europe even if only around 10% of it has been excavated.

Next to it, the Praetorium was a tower that connected the circus with the Provincial Forum. You can see part of it from the street Baixada de la Pescateria, but it’s worth it paying the small fee that includes climbing to the top of the Praetorium tower to enjoy some unique views over the city (probably the only public place in the city to do that) and walk inside the circus tunnels.

Having an amphitheater in a city where there was a circus and a theater as well is a prove of how important the city was during the Roman Empire. It is situated outside the walled area and it was very close to the Via Augusta road and the Tarragona beaches, where the animals that had to be used for the shows were disembarked.

Here they celebrated gladiators fights, hunting shows, and the arena could also be flooded with water coming from the sea in order to organize naval battles. Christians were also martyrized here, which is why in the middle ages a church was raised in the middle of the arena to honor those that were tortured and killed there by the Romans: the remains of the church are still visible nowadays.

While you can see the amphitheater from the Praetorium tower, as well as from the road and the gardens that give access to it, the (again, very small compared to Barcelona) entrance fee will allow you to seat in the grades and walk around the arena.

AND BONUS! The best things to do in Tarragona with kids:

There’s more than just Roman ruins in Tarragona… This amusement park located just outside of Tarragona is run by Universal Studios and receives 4 million visitors every year. It features a theme park, a water park, 4 hotels, plus many shows and restaurants… 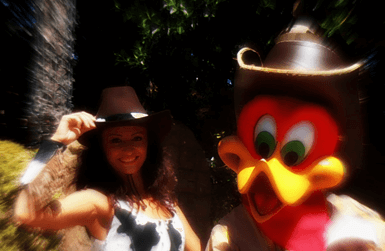 SEE ALL OUR TARRAGONA PRIVATE TOURS

In the summer there is even a Cirque du Soleil show every evening. The park is organized around 6 areas themed as 5 regions in the world (Mediterranean, China, Polynesia, Far West and Mexico), plus the Sesame Adventure for the youngest ones.

The scariest roller coaster used to be the Dragon Khan, with its many loops, but now it has recently been beaten by Shambala, the highest roller coaster in Europe with its super long dip. Only for the most daring people! There are organized day trips to Port Aventura from Barcelona, too (not organized by us, though)

Are you planning to visit Tarragona on your next trip to Spain?