​HOW MUCH IS PROPER TIPPING? 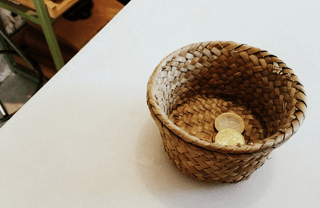 It can be embarrassing when you are not familiar with the tipping guidelines in a country. I get asked about tipping etiquette very often by my clients, and it can be also embarrassing for me to answer them when asked in front of the person to be tipped.

Is proper tipping in Barcelona really that different from your country? Often, yes: proper tipping amounts are not as big in Spain as they are in other countries, and specially now with the economical crisis, I see people tipping less and less. But if not tipping at all takes you out of your comfort zone (and giving too much doesn’t feel good for your wallet either), today’s post will be definitely of help:

Here is the proper tipping etiquette for the most common travel situations:

For a ride within the city, most locals consider that a proper tipping is to leave 10 to 20 cents (I personally tend to round up to the next 50cents or euro, for instance). And for a ride from the airport, one or two extra euros will make the deal. Needless to say, if you feel cheated by the taxi driver, he deserves nothing at all.

In Spain waiters get a relatively decent salary, the tipping etiquette says that a tip is considered always a reward for good service, what means that if the food is bad or the waiter is mean – no tip! But if you are happy with the service, the usual tips range between 7 and 10% (more if it’s a fine restaurant). For coffee or a drink, or a quick bite (sandwich, croissant…), a few cents are enough. We usually don’t leave anything for self-service food. 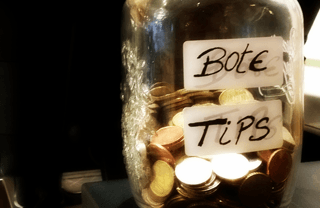 The proper tip amounts at hotels are probably quite universal, and they work for Spain too: one euro/dollar per piece of luggage will make them happy.

For airport transfers, €10 are acceptable. If you had a chauffeured tour, I see people usually giving them at least €20 for a 4-hour service. The longer the tour, and the happier you were with the driver, the more you should give.

That’s the most embarrassing part for me, as it concerns me personally, but since you asked… here is the answer: while in a group-tour one euro per person is the tipping etiquette, private tourguides are usually tipped per tour, not per person. In general, most people tip between €20 and €50 for a basic 4 hour service, but when the day has been longer, or we have been together for several days, we are often given larger tips. In our Terms & Conditions you can learn more about proper tipping for tourguides.

AND BONUS! Our Tipping Golden Rule:

For anything else: the Golden rule

Wondering what’s the tipping etiquette for hotel concierges, spa staff, hairdressers…? For any other  situation  when you wonder what’s the tipping etiquette in Spain, remember that the tipping guidelines in Spain can be summarized as follows: reward good service but not bad one, the amounts tend to be smaller than in the US, but the more you give them, the happier you’ll make them! And since tips are not expected but they are appreciated, any tipping should be considered proper tipping (if someone is not happy with it, it’s their problem, not yours!), but it is also okay not to tip.

Let’s chat: How do people tip in your country? And what do you do when you are traveling? Leave us your tips below!