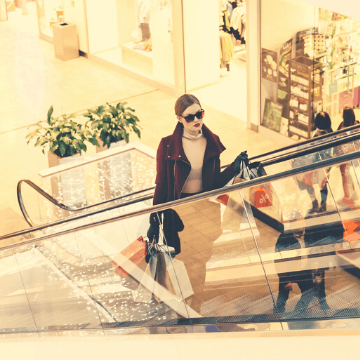 ALL ABOUT THE TOP BARCELONA SHOPPING MALLS

Barcelona is a shopping city! Pretty much every local district is lined up along a main shopping street, be it the exclusive brands in Passeig de Gracia or the average human being shops of Carretera de Sants. There’s districts that are great for shopping, too, like the Born neighborhood. But what if you don’t want to have to find your way around?

What if you want to have all your favorite brands and a few more to discover right in the same place? Are you a shopping mall lover? Then don't miss today's post! We tell you where to go, so you don't have to do your research.
PRIIVATE BARCELONA SHOPPING TOURS

Keep these shopping malls in Barcelona under your radar:

And maybe not only the largest in Barcelona, but in the entire region of Catalunya! It’s the place to go for shopaholics wanting to spend an entire day shopping and relaxing. It features 250,000 sqm (61.7 acres) of surface, almost a third of it is occupied by its 150 shops, 47 restaurants and one large movie theater. The rest is outdoor and covered areas for visitors.

The downside? It’s a 25 minute ride from Plaça Catalunya on either the subway (L1 to Sant Andreu). Or you can take the more confusing the Rodalies suburban train from Passeig de Gracia near Casa Batllo and it’s only 5 minutes to Sant Andreu Comtal on the R2N. But once you get there, it’s all about shopping. There’s nothing else to do in the area unless you feel like exploring the old district of Sant Andreu.

Galeries Maldà - The shopping mall for freaks and fans

Actually the oldest mall in Barcelona, the Galeries Maldà were a tranquil and humble shopping mall in the heart of the Gothic Quarter. But the usualstores have little by little been replaced by themed shops like the ones you see in Camden, London.
PRIVATE BARRI GOTIC WALKING TOUR

It’s a quite fun stop when you are visiting La Rambla or the Boqueria Market and are heading from there to the Cathedral of Saint Eulalia.

After the elegant Boulevard Rosa closed little before the pandemic, the centre of Barcelona was left orphan of interesting shopping malls. The only exception is El Triangle, located in a corner of Plaça Catalunya touching La Rambla and the commercial Pelai street.

I see it as a place to stop for a break in one of its convenient cafeterias, or the place to go for two big brands. There’s one of the largest Sephora perfume stores in the basement of it. And the French FNAC occupies the second and third floors with electronics, books and music. There’s also half a dozen small fashion and shoe shops.

Las Arenas - A mall in an old bullring

The round bullring Las Arenas had been permanently closed for a few decades until in 2011 it became a shopping mall. It was refurbished by the British architect Richard Rogers (the same that did the Pompidou Center in Paris).
TAKE A PRIVATE MONTJUIC TOUR

It’s not too big, but it’s a great fun way to start exploring the Hill of Montjuic: the escalators inside the mall lead you to the vantage point platform on the top floor where you get impressive views of the city. Yes, there’s a panoramic glass-walled elevator that takes you there too… but it’s not free like using the escalators inside!

This shopping mall is also the perfect place to have an informal bite before or after the Magic Fountain Show in one of its restaurants and cafes.

Diagonal Mar and Centre Comercial Glories - heading out to Poblenou

The Poblenou district used to be an industrial area that has been transformed into a cool combination of cutting-edge  sustainable contemporary architecture and refurbished factories and warehouses that attract local and international entrepreneurs and creatives. All this by preserving an area where you can feel “the real Barcelona” and see locals on their daily errands.

The area starts in the traffic knot of Plaça de les Glories Catalanes, famous for the “cucumber” looking building Torre Agbar and the Encants flea market. Right there you have Centre Comercial Glories, a medium to large mall with half as many restaurants and shops (30 vs 80). Food has been their firm wager to differentiate themselves from the competition.

The furthest end was a degraded area that was claimed by the city in 2004 to host the international event of the Forum of Cultures. And one of the key strategies to make the neighbors feel welcome again by Barcelona (and to attract locals from other districts, too), was opening up a large shopping mall: Diagonal Mar.

You’ll find there all the European and Spanish fashion brands such as Zara and its outlet Lefties, Mango, H&M and other. There’s also the enormous Alcampo supermarket, and the popular Mediamarket store for electronics.

BTW, if you are wondering if this shopping mall is close to the beach… Not really. There’s the Centre de la Vila mall in the Olympic Village that is close to the Nova Icaria beach, but it’s quite small and I’d only go there for emergency shopping (like you forgot your sun lotion, or your cellphone case broke), or to watch movies in their un-dubbed version.

Illa Diagonal - Where the wealthy shop

La Illa Diagonal was the first large shopping mall open in Barcelona in the 1990's. Until then everything there was were small shopping centers. Located next to the exclusive Turo Park and Sarria areas, it's the shopping mall of choice for the local upper-middle class.
STYLISH BARCELONA CAR TOURS

The selection of stores is similar to the ones you’ll find in other malls, however it transpires a classy feel the other malls don’t have. But don’t miss the food court in the basement, where rather than fast-food chains you’ll find branches of respectable local gourmet shops. Most of them, with their own tasting corner were you can enjoy the best Spanish Ham or an award-winning croissant during a break from shopping.

This is also my go-to mall for families with small kids. Sure, some other large malls have a play center. But in Illa Diagonal they have… a luna park! And a playground next to it. Plus one of the only two Disney Stores in Barcelona!

Need more? You’ll just be 5 minutes walk from the exclusive boutiques in Avinguda Pau Casals, and another 5 minutes from the Corte Ingles of Maria Cristina.  And from there you can catch a tram to go visit the FC Barcelona Stadium!

Corte Inglés is the Spanish brand of Department Stores. Moms love it because you can literally find there anything for your household, from clothes for the entire family, to food, furniture, electronics and gifts.
TAKE A PRIVATE WALKING TOUR OF BARCELONA

It’s also a convenient place to buy Spanish leather, which is why their building in Plaça Catalunya is usually crowded by tourists. This particular building is mostly for fashion, beauty, accessories and food.

Two blocks down Portal de l’Angel they have another building more appealing to young people, with their electronics, music and sports departments among other. There’s also a more spacious and classy Corte Inglés in the uptown Barcelona, by the L3 Maria Cristina subway station. That’s where the wealthy Barcelonans go.

And there’s another one one 7 minutes walk from L1 Fabra i Puig station (a 20 minutes ride from Plaça Catalunya). It’s a more working class district next to one of the busiest roads into the city, but it makes part of the Som Multiespai shopping mall, including outlet stores, food courts and a movie theater. And in the Summer, it’s next to the public pool of Can Drago.

In Spain, stores must be closed on Sunday by law. The only exceptions are souvenir shops, airport shops and shops located in port grounds. And because for every law there’s a loophole… the Maremagnum mall located in the middle of the water of Port Vell is the only Barcelona mall allowed to open in Barcelona 365 days a year.

You can make it your ending point after walking down La Rambla, and access it through the wood bridge that starts at the foot of the Columbus statue. The other access is a dedicated road that starts next to the Face of Barcelona statue (end of Via Laietana). That allows you to continue your sightseeing exploring the Born District and the Barceloneta fishermen quarter.

As for shopping, it's a middle sized mall, similar or maybe a tad smaller than Las Arenas. You might as well plan to have dinner in one of its 4 restaurants overlooking the harbor.
BEACH & SHOPPING IN YOUR DAY TRIP TO SITGES

The southern accesses of Barcelona are filled with shopping malls, some of them opening also on Sundays. Centre Comercial Sant Boi, l’Anec Blau, BarnaSud… But most of them have little interest to the foreign visitor and are mostly aimed at locals.

Let me just outline two of them. The Finestrelles mall is accessible with the same tram that departs from Illa Diagonal, just further outside of the city. And it stands out for housing the only Aliexpress store in Barcelona (the Asian competitor of Amazon).

Gran Via-2 is a huge indoor shopping mall with 200 stores. Very popular among locals because it’s located conveniently next to an Ikea store. There’s several bus lines that take you there from the city center (L95, H16, H12…) but the closest subway station from the city center is the L1, 15 minutes walk. The other stations nearby connect with the FC Barcelona Stadium and the Hill of Montjuic, but not with the city center.

AND FINALLY! Are there any outlet shopping malls in Barcelona?

Yes! There are two of them! Although they are not exactly IN Barcelona but OUTSIDE Barcelona. In the city you can find outlet stores. The newest one is the Viladecans The Style Outlets. You can take the Rodalies R2 line from Passeig de Gracia and stop in Viladecans (25 minute ride), very close to the mall.
STOP IN LA ROCA DURING YOUR GIRONA TOUR

The other outlet mall in Barcelona is La Roca Village, 40 minutes ride North of Barcelona. Before the pandemic they had a shuttle running from the Barcelona city center, but unfortunately it’s not available right now.

So besides renting a car and driving there, or booking a private driver, your only option is public transportation. And you’ll hate to hear that it’ll take you more than twice longer, combining Rodalies train and a local bus… But if you are in for a more boutiquey experience than the Viladecans mall, it is worth the adventure.

What are your favorite Barcelona shopping malls?