The Vila De Gracia Through Its Squares 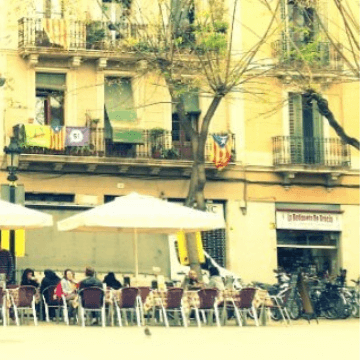 STROLLING AROUND THE PLAZAS OF THE GRACIA NEIGHBORHOOD

Gracia plazas are distinct landmarks of the Gràcia district. Originally an independent village connected with Barcelona through a road that was going to become the nowadays fancy Passeig de Gracia, that part of the countryside north of the old Barcelona was often developed by private real state owners that would plan residential areas with streets sprouting out of a plaza.

And nowadays, those plazas (“places” in Catalan, but written “plaça” in singular) have become neuralgic points of the locals life.

The visit of the neighborhood can’t be done but jumping from plaza to plaza, and learning about each one’s personality and what it means for the neighbors. Come with us today: we are taking you off the beaten path to discover the real Barcelona.
WE TAKE TAPAS SERIOUSLY IN OUR TAPAS TOURS

These are our favorite squares in the Gracia district of Barcelona:

Get off the Fontana L3 subway station and take Astúries street all the way down until you hit this scenic plaza presided by the church of St. Joan Baptista. Interestingly enough, the plaza wasn’t named after it, but after the Virreina, widow of the Viceroy, who owned the lands.

Locals love having a drink in the outdoor cafés of the plaça: Terra Mar, Virreina and La Cafetera. And savvy parents buy educational toys for their kids in the fabulous Bateau Lune shop. Very close by you’ll find the Verdi and Verdi Park movie theaters, offering films in their original language version.

By the way, if the church is open when you visit, make sure to check out its Santíssim Sacrament chapel, which some researches claim to have been designed by Antoni Gaudí, who often attended mass here.

Retrace your steps back on Astúries (or take Carrer de l’Or, for a chance) until you get to another iconic Gracia plaza. This neighborhood is also known as “Barri del Joier” (Jeweler’s quarter) because it was originally developed by a jeweler who gave the streets names of gems: gold (Or), pearl (Perla), ruby (Robí), topaz (Topazi)… and eventually its center: the Square of the Diamond.

However, who put this plaza in the map was the Catalan female writer Mercè Rodoreda with her novel called after it (but translated into English as “Time of the Doves“). There is an underground shelter from the Spanish Civil War that is open for visits every Sunday at 11AM, on prior reservation only.

Now go back to Verdi street and stroll down window shopping. The street ends (or should I say, starts) in a paved plaza that doesn’t have much charm except for having one of the best gelato places in town: Gelateria Italiana Deliziosa. There is often a long line to buy their specialties – my recommendation is to try their dark chocolate one: so powerful!

GELATO AND SWEETS TOUR OF BARCELONA

Underneath this plaza there is another civil war shelter, but it’s not as well preserved as the one in Plaça del Diamant because part of it was destroyed when a parking lot was built. But it’s actually thanks to that parking that you’ll be able to visit it… if you are in for some adventure! Access the parking, find the guards’ booth and ask for the key to the shelter. Then go to the lowest level of the parking lot, and in a wall you’ll see the entrance to a tunnel. Use the key to unlock it and switch on the light (to the left of the door).

Back to the surface, take Ramon y Cajal street back again, and right after crossing Torrent de l’Olla you’ll reach the most popular Gracia square for partying at night. Youngsters love to come and sit in this plaza to drink and chat with their friends in the evenings (to the dismay of the neighbors, who are tired of the noise).

But during daytime it’s much quieter. The name of the square translates as “Square of the Sun”, and there is indeed a sundial in the plaza – but you won’t find it in a wall: it’s actually a sculpture that includes representations of the signs of the zodiac.

The largest square in Gracia is this plaza, formerly known as Rius i Taulet. Here you’ll find the district town hall (that’s where I married!), and a clock tower built in 1864 as high as possible with the idea that the sound of the bells should reach as far as possible, as many areas of the village didn’t have a church yet, or their church didn’t have a bell.

The locals remember when in 1870 the locals revolted against the army that was forcing 250.000 people to join them to fight in the War of Cuba. The locals refused to join the army, and for 7 whole days the district was circled by the army until the neighbors were defeated and the fighters executed.

But during that whole week the bell of this tower didn’t stop tolling, encouraging the neighbors to defend themselves until eventually the bell broke. Now the plaza is much more quiet, and locals love to sit in its many outdoor cafés to enjoy some tapas and a beer.

AND BONUS! Go a bit more off the beaten path to discover our 6th favorite plaza and what makes it special:

You might have heard that the Eixample district of Barcelona was designed by the city planner Ildefons Cerdà. What you might not know is that he was appointed by the Spanish Government, against the local will, that preferred the project of a certain Rovira i Trias. This architect was born in Gracia, and he was commissioned by three landowners to design the plaza that would be the hub of their urban development (actually, the name of these gentlemen can be recognized in the surrounding streets:

EXPLORE BARCELONA WITH A REAL LOCAL

Torrente Flores (for Torrent de les Flors), Massens and Rabassa, and their wives were dedicated the street of the “three ladies” (Tres Senyores). But back to Rovira i Trias, in one of the plaza benches you’ll find a real-size bronze sculpture of him, and in the floor a copy of the project for the city expansion that was never performed – I must say the Spanish Government made for once a good decision, as Ildefons Cerda’s plan has proved over the decades to be a ground-breaking urban plan.

Are you planning to visit the plazas of Gracia district?