Should you visit La Casa Amatller in Barcelona? 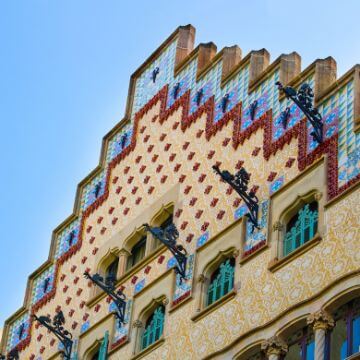 WE TELL YOU HOW IS THE CASA AMATLLER INTERIOR LIKE

Antoni Amatller i Costa was a wealthy chocolate maker in the Barcelona of the late 1800’s. He owned a building in the prestigious Passeig de Gracia, like any rich local businessman should. But the architecture of the building was pretty bland, it didn’t stand out. And showing off was a key reason to choose Passeig de Gracia as a place to live. So Mr. Amatller contacted one of the most prestigious architects of his time, Puig i Cafalfach.

They were going to completely refurbish the property and update it to the Modernist trend that was in fashion then. The result combined elegantly historical influences with references to Mr. Amatller hobbies and interests.
PRIVATE TOUR OF CASA BATLLO

Everything you need to know about visiting Casa Amatller inside:

Casa Amatller compared to the rest of the Block of Disagreement

Just two years later, in 1902, the building down the corner was also remodeled by another top modernist architect. That’d be known as the Casa Lleó Morera by Domenech i Muntaner. And soon after, next door to Casa Amatller  Antoni Gaudi renovated Casa Batllo to give it an extravagant look. The legendary “Block of Disagreement” of Passeig de Gracia as now completed: the locals couldn’t agree which of the three masterpieces was the best.

At the moment, Casa Lleó Morera remains closed to the public until they can figure out how to comply with the local accessibility and safety requirements. You can rule it out of your list.

As for Casa Batllo, it is indeed one of Antoni Gaudi’s most important buildings and it’s usually crowded. Instead, Casa Amatller is less popular because… well, it’s not a Gaudi site. So if you don’t like crowds and prefer unique gems, Casa Amatller should be your choice.

Also, Casa Batllo doesn’t display any furniture or decoration: it’s all about architecture, light and color. Instead, Casa Amatller is maybe darker, but the furniture and decoration fixtures are beautiful. If you are an architecture lover, Casa Batllo is for you. If you’d like to feel transported to a private home of the early 1900’s and see how people lived then, go for Casa Amatller.

Then, in Casa Batllo you get to visit the rooftop and enjoy the city views as well as the backyard, whereas in Casa Amatller you are always indoors. And Casa Batllo has introduced new technologies and audiovisuals to entertain the youngest, while Casa Amatller is all vintage and antiques. BUT, Casa Amatller has hot chocolate!

I know this post is supposed to be about La Casa Amatller interior, but before we go in, it's worth to spend some minutes checking out the outside.
CUSTOM VIRTUAL TOUR OF CASA AMATLLER

There you’ll discover Saint George killing the Dragon, references to the 4 fine arts (Music, Painting, Sculpture and Architecture). And you’ll get acquainted with Mr. Amatller’s hobbies: photography, glass and pottery collection, reading… As well as a tribute to the major crafts that were used to decorate the building: wrought iron and carpentry. Hint: look for the animals decorating the balcony doors.

The entrance hall and the cafe of Casa Amatller are open every day,

This area is still free of charge and open to the public. Feel free to get in and poke around. You'll see there's two gates: one was for vehicles, the smaller one for pedestrians. There's also a door that hides the concierge desk.
MODERNISM TOUR OF BARCELONA

The beautiful glass door led no less than to the house garage. Yes! Mr. Amatller owned one of the first cars in town! And there’s a roped area leading to the stairs that is only accessible if you’ve paid the entrance fee. But if you tilt over the rope and look up you’ll see an outstanding stained glass skylight.

The staircase feels like taken out of a medieval castle. The Middle Ages were a favorite source of inspiration for the modernist architects. But unless you have paid the entrance fee you won’t get to see the cute decoration under the stairs representing animals… making chocolate! Remember I said Mr. Amatller owned a chocolate factory?

If you aren't visiting the rest of the house, don't leave just yet! Step passed the garage glass door into what used to the kitchen of the house. There you'll find a chocolate store selling Amatller chocolates.
VISIT THE AMATLLER CHOCOLATE FACTORY WITH US

Yes, the brand still exists, although it’s now run by another local family of chocolate makers, the Simon. The only daughter of Mr. Amatller, Teresa, sold them the company since she didn’t have any children that could continue the family business. It’s really nice chocolate! Ask if they have any samples you can try. They often do. And their lovely vintage packaging with the original art nouveau designs Alphonse Mucha made for them make for great gifts and souvenirs.

A bit further in, a large table is surrounded by the old sinks and oven. The servants quarters that were next to the kitchen haven’t been preserved, but the area is now occupied by a lovely cafe where you can get a light meal or some Amatller hot chocolate to eat in the kitchen table.

Visiting the interior of Casa Amatller

The paid visit of Casa Amatller includes the main floor (second floor for Americans), where Mr. Amatller and his daughter lived. You'll watch first a short video that will introduce you to the time frame and the history of the family as well as the house and its architect.
MORE PUIG I CADAFALCH SITES IN OUR EIXAMPLE TOUR

Next to the video room you’ll see the superb dinning room, presided by a huge fireplace. The decoration on top of it represents how cocoa beans were imported from America. Let your senses be mesmerized by the stained glasses, the intricate wood work, the gorgeous pavement, the ceramics, everything! A modernist house was supposed to be a complete work of art.

A darkish corridor where you’ll see objects related to Amatller’s daily lives, takes you to the other side of the house. Teresa’s quarters consisted of a sewing room (yes, sewing was one of the few activities the ladies of the high society were allowed to do as a hobby), a bedroom and a dressing room. Teresa redecorated this last one in Art Deco style in 1934.

Between her room and her father’s quarters there’s the main room where they met guests, now displaying part of Mr. Amatller’s precious antique glass collections. Besides his bedroom, you’ll also get to see his dressing room and the original bathroom.

What's not open to the public?

Mr. Amatller had a photography laboratory to develop pictures in the attic. The apartments in between used to be rented out. This was a common practice as the owners of the build liked to increase their wealth.
SEE MORE CASA AMATLLER FURNITURE IN OUR MNAC MUSEUM TOUR

Teresa Amatller created a foundation to manage the building and her father collections, pictures of their exotic African trips, library and archives. The Amatller Hispanic Art Institute continues to be in charge of such heritage, and they were responsible for restoring the building in 2007-08 and opening part of it to the public.

There’s no one living in Casa Amatller anymore. The apartments are now either occupied by the Amatller Institute or rented out as offices. So all that is not open to the public. Neither is the backyard, now a green roof covering the facilities of the Bagués Masriera jewelry in the street level.

Chocolate Amatller (new variant, on board) Vintage...
$16.99
Check on Amazon

Chocolate Amatller (New Variant, on Board) Vintage...
$20.99
Check on Amazon

You can visit Casa Amatller either on your own with an audioguide or joining a tour. Or in the Summer, take their night tour. They are open every day 10AM to 6PM except Christmas day.

Are you planning to visit Casa Amatller when you are in Barcelona?