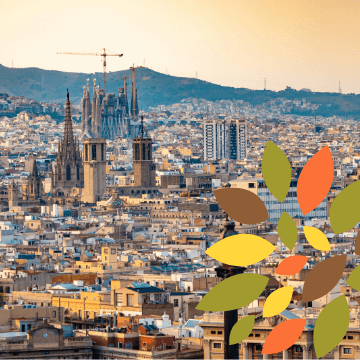 What to do in Barcelona in October

A GUIDE TO OCTOBER IN BARCELONA

The tourist high season is over! And while the city is certainly not dead at all and there’s still visitors around, Barcelona isn’t busy in October. October is actually a great time to visit Barcelona! The weather is nice, there’s plenty of things going on and the nature dresses in their fall colors.

If you are able to be visiting Barcelona in October... lucky you! You are in for a great experience! October is the new September. And if you want a few trips to make your trip successful and more fun than just sightseeing all the top sites... You came to the right place!

Travel tips for a smooth trip to Barcelona in October

Weather in October in Barcelona

The average temperature in October in Barcelona is quite nice and warm enough: it goes between 21.7ºC / 71F during daytime to 14ºC / 57.5F at night. It’s still a good month to be outside to walk around, although it starts being a bit too chilly to eat outdoors, for instance. It’s a similar temperature to Los Angeles in October.

October, however, is the wettest month in Barcelona, with an average of 8 rainy days a month and 94mm / 3.7of rainfall – that is quite similar to LA… in February!

I need to say, though, that the Barcelona rain is very “respectful” and it rarely lasts more than one day in a row. Plus if the forecast says “one day of rain”, it’s usually only part of the morning or maybe just at night. So it rarely affects our daytime activities much.

What to pack for Barcelona in October

How to dress for Barcelona in October? The right answer is: dress in layers! Bring a bit of everything, but nothing in the extremes: short sleeves yes, tank tops probably not.
CHECK OUR PRIVATE GAUDI TOURS

Long sleeve sweaters and a light jacket yes, but forget about anoraks or even wool jackets.

As for shoes, you’ll be cold with open sandals, but probably too hot with ankle boots. Flats and sneakers are your best friends.

Should you pack an umbrella, though? That depends. If you trust your luck, leave it at home. If it ends up raining you might be able to borrow one from your hotel (4 and 5 stars usually have some to lend), or buy a cheap foldable one to a street vendor for €5. They appear out of nowhere as soon as it starts raining!

READ THIS! Specially if you are American,  because in the US the Fall daylight saving time change doens’t happen until the first Sunday of November, BUT… In Spain and most Europe, it happens on the last Sunday of October at 2AM. Ask Google to get the exact date.

The clock goes backward one hour. Which is good because you’ll have one more hour to sleep or party. But beware if you are taking a an early morning flight that day!

What to do in Barcelona in October

Can you swim in barcelona in october? Barcelona locals stop getting in the water by the end of September. In October, the average water temperature is 21ºC/71F, and that's already too col for most Barcelonans.
CHECK OUR PRIVATE GAUDI TOURS

Although you can still see neighbors of La Barceloneta that get an early morning swim every single day of the year.  And German and other Nordic tourists enjoying a bath. But that’s because they are used to colder waters.

Instead, locals continue to enjoy the beach for sunbathing (even if not always getting on their suimsuits but keeping most of their clothes on). We go there for the sport facilities (fitness, voleyball, soccer, basketball…). And we definitely still love to go eat some paella by the sea (even if not always eating out on the terrace).

While Summertime is the biggest month for local celebrations, that doesn't mean Fall is boring... October in Barcelona and its surroundings are packed with traditional festivals that yo'll want to check.
CHECK OUR PRIVATE GAUDI TOURS

Everything starts with the Festes del Roser, the Festa Major of La Rambla. This Festival in honor of the patron saint of the street, Our Lady of the Rosary, takes place on the weekend before October 7 (unless October 7 falls on a weekend). They are organized by the Association of Friends of La Rambla.

October 12 is the Dia de la Hispanidad. It’s the day Christopher Columbus arrived to America, and it’s also the day of Our Lady of the Pillar, who is said to have inspired the evangelization of the New World. It is mostly celebrated with a military parade in Madrid and a tribute to the Spanish flag. But in Barcelona you’ll just notice it’s a holiday because the stores are closed. There might be a small political meeting of Spanish fervent patriots in the city center, too. But it is true that there’s a large part of the population that don’t like this celebration much because of its colonization origins, and they think there’s nothing to celebrate that day…

October 29th is Saint Narcissus, patron saint of Girona, and the days around it they celebrate the Fires de Sant Narcís festival. If you feel spending a day out of town, it’s a lively time to visit this city famous for its medieval and Jewish heritage.

And we can’t forget the evening of October 31st. While in the States they’ll be celebrating Halloween, here it’s All Saints Day. An evening to gather with friends and family to eat roast chestnuts and panellets marzipan treats.

October is a time for mushrooms. If the rain has been generous, the locals will be flocking to the forests to forage them. And if it's been dry... we'll import them from wetter areas so we can still enjoy them!
CHECK OUR PRIVATE GAUDI TOURS

Head to local food markets and enjoy all the delicious mushroom varieties sold there. Restaurants will fill their menus with mushroom specialties as well.

Food Festivals in Barcelona in October

October in Barcelona is a foodie destination!

If there's a month for art and culture lovers, that's October! There's so much going on:  architecture, fashion, contemporary art, music, cinema... Such a great time to be around! Here's what's on:
CHECK OUR PRIVATE GAUDI TOURS

Do you have an extra day and want to go out of town? Not everything is the Costa Brava beaches (already too cold for swimming, plus most business close there around mid-October anyway).
CHECK OUR PRIVATE GAUDI TOURS

These are great day trips outside Barcelona in October

The Spanish League is in full swing, and the FC Barcelona plays at home every two weeks. Maybe you can catch one of the Barcelona games in October? Cheering for the FC Barcelona surrounded by happy fans will be a memorable time! And if you can’t hit a match, you can always at least visit their Camp Nou stadium if you love soccer. See the changing rooms, press boots, grass level, VIP balcony and the trophy museum.

Alternatively, there’s a second soccer team playing in La Liga – the RCD Español, with their stadium in the suburbs reachable by subway.

OK, but fall is about Foliage! Can I see it in October in Barcelona?

Where to see the foliage fall colors

The good weather of October in Barcelona invites to be outside and enjoy nature while it isn't cold yet. And while most Mediterranean trees are perennial and don't lose their leaves, there's some species that add some color to our woods in the Fall.
CHECK OUR PRIVATE GAUDI TOURS

Here is where locals go for foliage:

Will you be in October in Barcelona?