WHERE TO BUY TURRON IN BARCELONA?

A SELECTION OF THE BEST TURRON SHOPS IN TOWN

Turrons are the most appreciated candy in Christmas time, they are the dessert in any Christmas table: without them Christmas in Spain wouldn’t be the same!

Spanish turron is said to be an evolution of an Arabic candy that reached our lands in the Middle Ages, and it was usually made of almonds and honey. Nowadays marzipan continues to be the main base for most turron flavors, but you can also find turrones of anyything: chocolate, hazelnut, cream, coconut… there is even a gin & tonic turron by Ferran Adrià.

So coming to Barcelona during Christmas and don’t want to miss it? You’ll be able to find it easily from early December until end of January (cheaper after January 6, when our local Christmas season officially ends). But make sure to buy good quality ones, or you might be disappointed! So let me share with you the best turrons shops in town.

This is our insiders turron shop selection:

Possibly the most famous Barcelona turron shop to buy traditional turron. This family-run business was opened in 1850 as a stall in the concierge stall of a building, and still nowadays most of their shops are narrow and long, as if they were still occupying an entrance hall. Although turrons are usually eaten in Christmas, the good news is that they produce and sell them all the year, and in the Summer, they also sell homemade “horchata” and icecream. The quality of their raw material is exceptional, what explains that they are more expensive than the supermarket ones, but it is well worth the price. Choose here the traditional flavors: Xixona (soft almond), Alacant (hard almond), Crema Catalana (egg and burnt sugar) and Nata Nous (walnut and cream), besides a variety of chocolates. This is where my grandparents bought turron every year, then my parents, and now my husband and I go there with our baby. 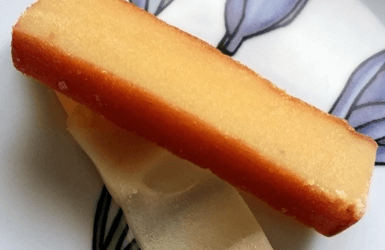 If there is one turron shop that can be considered as famous as Planelles Donat in Barcelona, this is Colomines. Some of their shops are even almost one next to the other – which is why half of the local population buys in Planelles Donat, while the other half of the city goes to Colomines. And they also started as immigrants from the Valencia region that set up turron stalls during the Christmas season, and eventually decided to stay and open permanent shops. They have very similar turron specialties as well as other Christmas candy such as marzipans, and the lines to get turron here can be as long as those in Planelles Donat during the holidays. I’ve also bought turron there once, a year when the queue at Planelles Donat was way too long, and I must say the turrons were very similar to those in our favorite shop. It was also here where I tasted for the first time the cream turron with cinnamon, that has become one of my favorite together with the milk chocolate and almonds turron.

This famous family brand from Agramunt (Lleida province). has been making turron and candy since 1775. Their most famous turron duro (hard turron) is the Torró d’Agramunt, made following the same recipe from two hundred years ago: almonds or hazelnuts, sugar and honey covered by round wafers. These last years they’ve open lots of shops in the city center, and they often have samples to taste if you ask. It’s lots of fun to explore their offer of flavors with candy fruit, all kind of nuts and textures, and even gold leave! Also, in their hometown  Agramunt they’ve opened a museum of the history of turron.

You’ll find this other historical turron shop in Princesa street, the heart of the medieval Born district and very close to the Picasso Museum. They also sell turron all year around, plus icecream and horchata in the Summer: again another family from Valencia, when they decided to stay permanently, knowing that turron is a very seasonal winter product, they had to find something to complement their offer in the hot months and such kind of refreshment and treats made the trick. Oh, and they made turron gelato as well, of course! They also have a creperie in Flassaders street, almost around the corner from their original store with a lovely terrace overlooking the back of the Picasso Museum.

During the Christmas season, aside from the specialty turron shops, you can also find great turron in many cake shops. Places such as Escribà, Oriol Balaguer, Bubó and many others will delight you with gourmet turron ranging from the most classic types to some unique creations. Most of the time, they’ll come decorated with icing or nuts, and they have a larger chocolate turron selection than in the traditional stores. In the villages outside of Barcelona, where it’s harder to find specialty turron shops, cake stores are the place to go to buy good turron: that’s what my in-laws do in the Wine Country where they live.

AND BONUS! Are supermarkets an alternative to turron shops? 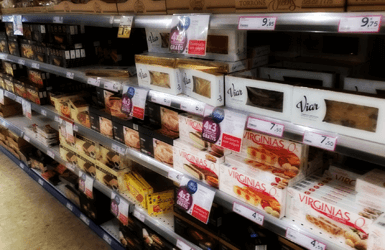 Turron is made out of nuts, and nuts are expensive. This is why turron bought at a turron shop or a cake shop can be quite expensive, but you get awesome quality. However, locals usually combine them with cheaper supermarket turron bars. They are a good deal, but the quality is not as outstanding as you get quite industrialized products, plus the size of the bars is much smaller (even if the box makes them look biger – what a disappointment!). However, you won’t find turron there all year around: the season starts somewhere around the end of October and lasts until mid January (discounted prices after January 6, when the celebrations are over and people aren’t likely to buy it anymore). Some brands Spaniards love are Suchard, 1880, Antiu-Xixona, La Jijonenca, el Almendro and Delaviuda.

So what about you? Head to the comments below and tells us: have you been at any of this turron shops and what did you buy?

2 thoughts on “WHERE TO BUY TURRON IN BARCELONA?”