WHERE TO FIND THE BEST BARCELONA CUPCAKES 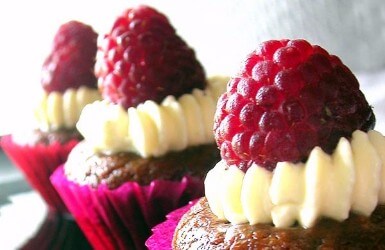 Cupcakes are here to stay. The cupcake fever arrived to Barcelona a few years ago and while some people thought they were too sweet for the local taste and that it’ll be a bluff, the truth is that they have stayed and now they have won their own spot in the local sweet scene.

And the best thing about chasing the best cupcakes in Barcelona is that finding the stores requires you going a bit off the beaten path and exploring cool areas of the city where you probably wouldn’t go for any other reason. And what’s more fun than getting lost in a city and stopping for coffee and cupcake?

So today we are sharing with you our favorite cupcake stores in town, and we hope that will bring you the opportunity of a cozy time in town!

These are the best cupcakes in Barcelona:

You probably won’t find Escribà in the average online cupcake listing of the city, but I’ll tell you a secret: in 2015 I toured a mom and daughter that had a cupcake-themed blog and we went trying all the best cupcakes in town. And this was one of her favorite! True: Escribà doesn’t specialize in cupcakes, but as the owner Christian Escribà told us, they are the 3rd generation of cake makers in the family – they know how to do things right or they wouldn’t be in the business anymore! BTW, you’ll only find their cupcakes in their main store on 546, Gran Via de les Corts Catalanes (not on the tiny but cute one in La Rambla).

They are THE classic cupcake store. With their Nordic interior design and informal but cute style, they have become the reference for cupcakes in Barcelona and one of the very best makers, too. Their red velvet is super famous! They have a tiny whole-in-the-wall shop in the heart of the Raval district (no space to seat down here cupcakes become street food), their original store and café is in the top of Enric Granados close to Diagonal avenue, and if you are hungry enough for a full meal, in their syster restaurant Brunch & Cake in the other end of the same street besides cupcakes you’ll also be able to eat salads, eggs and sandwiches. TIP: Walking distance from the Enric Granados/Diagonal store you’ll also find the lovely creations of Think Sweet on Rambla Catalunya with Córsega. 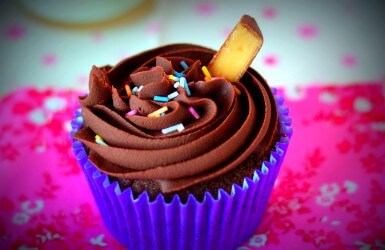 Another famous cupcake shop in Barcelona, this time you’ll have to go to the Born district and leave your comfort zone entering the maze of alleys beyond the Picasso Museum to find this cute cake shop specializing in cupcakes but also cheesecakes and desserts for weddings, birthdays and parties in general. You can even buy XXL-sized cupcakes! (upon reservation in advance only). BTW, very close but in the more touristy area around Santa Maria del Mar you might also want to check Florentine Cupcakes in Calders st.

Good VEGAN cupcakes? Yes! Now head to a less explored area of the Eixample district, away from the crowds of shoppers and Gaudi lovers, where the neighborhood becomes local and real again, to find this vegan café famous for their cupcakes. Don’t miss their peanut butter raspberry cupcake. Yum! They also serve other vegan cakes, cookies, doughnuts and buddha bowls. It’s away from the areas we visit in our Sweet Barcelona Tours, but did you know that we can custom our itineraries to include your favorites on request?

Now I’m sending you to the Gracia district (not Passeig de Gràcia: the neighborhood that extends north of it on top of the Diagonal Avenue) – a lively district with lots of plazas with outdoor cafés, local designer cloth shops and alternative / organic / hippiechic businesses. Between two of its famous plazas (and very closed to a very recommendable hot chocolate place called La Nena) you’ll find this cool store specializing in cupcakes with fun decorations: unicorn cupcake anyone?

And BONUS! Here is something else as fun as cupcakes: kronuts! 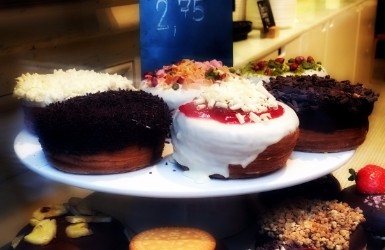 If you think cupcakes are pretty, then you need to see the displays at Chök! Their doughnuts and kronuts (doughnuts made of croissant dough) are spectacular! You won’t know which one to choose. And the good news is that you don’t need to take a long detour to find them: they are located right around the corner from La Rambla, very close to the Boqueria market!

So what about you? Head to the comments below and tells us: what are your favorite Barcelona cupcakes and where did you try them?