BACK TO TOUR DESCRIPTION

This is a sample itinerary for our Private Jewish Tour of Barcelona.
Final itinerary and timings might vary due to many factors (site opening hours, your location and pace, your main interests…)

THE FOLLOWING SITES ARE COMMON FOR ALL THREE TOURS:

Stroll around the alleys and backstreets of the Gothic Quarter and the Call, the medieval Barcelona Jewish Quarter. Unfortunately, not many elements where left after the quarter was attacked in 1391, but you can still feel there the atmosphere of the Middle Ages.

You will walk around and learn about its history: the major and the minor Calls, the possible location of the Mikhva… You will also see Hebrew tombstones embedded in the walls of various buildings, discover where a Faith Debate took place, and where the Inquisition Headquarters were located in 1493.

The Oldest Documented Synagogue in Europe

Only one of the medieval synagogues in town has been recovered, since the rest were lost after the pogrom of 1399 and the subsequent christianization of the area. The good news is that the one that can be visited nowadays was precisely the main synagogue of the time, probably dating from the Roman times, and according to the Catalan royal records older… than the one in Prague!

Your guide will give you an introduction to the history and the building before going in, but the main explanations will be given inside by the synagogue staff. 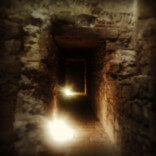 MUSEUM OF HISTORY OF THE CITY

The Museum of History of the City is famous for its Roman ruins. However, not many people know that here you can see Jewish inscriptions embedded in the ruins. The basement of the Royal Palace also features an interesting collection of medieval objects, and one of the cabinets is dedicated to Jewish artifacts. Finally, you’ll be able to enter the throne hall of the Palace (now either empty or used for temporary history exhibits), where the infamous Disputation of Barcelona between friar Paul the Christian (a converso) and the rabbi Moshe Ben Nachman took place. 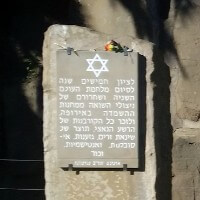 The name of the hill that marks the limit of Barcelona could mean the Mountain of the Jews, as the medieval community used to have their cemetery on top of the hill.

Unfortunately, little is left out of it, as decades ago an amusement park was built on most of its ground (now the rides are gone and it remains a public garden). Only a section under a popular vantage point is left untouched and closed to the public, but only weeds are now to be seen as the tombs got gradually covered and buried through the centuries. We’ll however be glad to take you there so you can pay them your respects and learn more about it.

Instead, in the bottom of the Hill of Montjuic expands one of the largest modern cemeteries of the city, and while there isn’t a specific area for modern Jewish tombs there, in a secluded area stand two humble Jewish memorials: one for the Jewish that died in the Spanish Civil war, and another for those who perished in Second World War.

Don’t expect them to be grand, spectacular or even beautiful, though. They are rather humble memorials and the purpose of the visit should just be to hear about this modern part of the local Jewish history in a soul-stirring setting.

The cemetery of the district of Les Corts is nowadays chosen by many Jews to bury their loved ones, as it features a dedicated area for them. If you are curious about it, we can show you around respectfully. It’s also a good location to discuss the modern Jewish community and its most prominent members, some of them involved in the management of the FC Barcelona team, which stadium is just across the street.

After visiting the Cemetery of Les Corts, we’ll drive you back to your hotel, apartment or the cruise pier.

BACK TO TOUR DESCRIPTION
INQUIRE NOW