GREAT EL RAVAL RESTAURANTS YOU NEED TO CHECK OUT

El Raval neighborhood is the most densely populated area in the Ciutat Vella district. I must say that long ago people called it Barri Chino (Chinatown) because of the vandalism and crime there, and it was considered a dangerous place. Nowadays, after building two police stations, new university faculties, the Rambla del Raval and the MACBA Museum, the area has become an interesting place to walk around that mixes up the ethnic origins of most of its inhabitants with some underground and trendy shops and businesses, as well as lots of bars and restaurants.

However, lots of these eateries are cheap an lack of charm: mostly kebab, falafel and sandwich places, or dusty bars now run by Chinese immigrants. And after the famous Casa Leopoldo closed, we felt we needed to share what were the available options for a decent meal in the district. That’s why today we are recommending you our favorite el Raval restaurants that will never fail you. 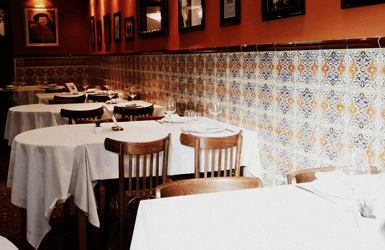 These are our favorite Raval restaurants:

With its 125 years of history, Ca l’Estevet has been a mythical restaurant frequented by local celebrities, as you can see in the photos hung on its old-fashioned tiled walls. The last one was Mark Zuckenberk, the Facebook owner! Its cuisine is based in Spanish and Catalan earthy dishes: pig trotters, pork sausage with beans, duck with orange, baked lamb, monkfish, sole, calamari… Veggie lovers won’t find many options here, but they will definitely enjoy their “escalivada” (baked veggies) with goat cheese and their spinach the Catalan way (sauté with pinenuts and raisins).

Two restaurants in one: a bar counter where to have very well prepared tapas in La Taberna del Suculent, and a sit-down restaurant serving earthy traditional dishes made with the highest quality products. Meat lovers will definitely feel like heaven here, specially those adventurous enough to try their offal recipes, that they take to the level of the most exquisite culinary creations. A place to dip bread on the sauce of every dish (actually, they like to make a word game between the name of the restaurant – Suculent meaning delicious, and “Sucar lent” in Catalan Dip slowly). Call to find out when there is life flamenco: local gypsies often show up to play their guitars and enjoy some tapas. Ravel rethinked.

A high end tapas bar where the high society goes before heading to the Opera Theater around the corner. The restaurant consists of a long counter around the kitchen, where you can eat your tapas while seating on a stool. They also have a tall table for groups (that must be booked in advance). But if you prefer a sit-down meal, they own next door Cañete Mantel, a traditional Spanish restaurant where you can seat on a table and order more elaborated dishes. Their tapas have an Andalusian and Castilian touch, and everything is awesome except for the Spanish omelette (potato cut in cubes? really?!). I crave for their eggplant with molasses. All their fish comes from local fishmongers and their veggies come from sustainable and close-by producers. 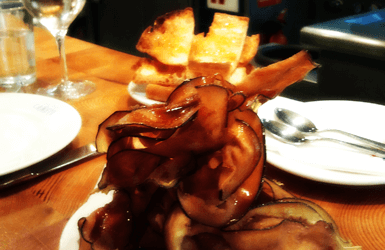 The owner of this restaurant, Albert Raurich, assures he had the idea of opening this restaurant when he was working at the famous El Bulli by Ferràn Adrià, where was a chef for over 10 years: a place that combined the small servings of Asian cooking with the Spanish tapas culture. The name of the restaurant means “Two Chopsticks” and most of their dishes are Japanese, or at least use Asian ingredients, but they are often given an interesting Spanish touch. This Raval restaurant belongs to the Casa Camper hotel that is one of our favorite in the area, and it has already received one Michelin star. They have two different areas: a bar counter overlooking the cooks, where you must get the tasting menu, and the tapas bar (also on a counter) where you order à la carte. They have tables in their outdoor terrace and if there is a private room with a table for groups up to 12 people.

For a more informal and lighter meal, head to this popular Raval restaurant with a menu inspired in the more than 40 nationalities living in the district: woks, pasta, salads, meat… With a young atmosphere, the wall is always decorated with paintings and pictures of local artists that reminds you that the venue had been an art gallery before it became a restaurant. During lunchtime they have a very affordable day menu that almost always includes a vegetarian-friendly option. Dinners are always à la carte. Make sure to call to book a table, or show up early: it’s a very popular place and you don’t want to have to wait by the counter until there is a table available. It’s one of our guide’s Miriam favorite restaurants (she discovered it when she was living in the neighborhood), and we’ll often eat there when we haven’t seen each other for a while.

AND BONUS! Which Raval restaurant was the favorite of Juan Carlos I, the former king of Spain?

This is the favorite restaurant of our former king, Juan Carlos I. This classic restaurant offers since 1970 a unique cuisine based in fresh ingredients that the owner, Mr. Isidre, buys every morning in the Boqueria market (if you get there early, you are likely to see him choosing his fish in the central fish section or buying fresh mushrooms at Petràs at the bottom of the market). Tradicional Catalan and Mediterranean cuisine with some modern touches, and a cellar featuring more than 400 different wines. It’s an old school restaurant, with elegant mantelpieces and quiet atmosphere: perfect for a formal meal or a business lunch, or to regal your palate with local delicacies such as the most expensive Spanish ham or some dish including truffle or foie gras. 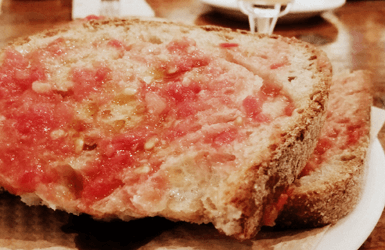 Do you know of any El Raval restaurants worth checking out?