Catalan And Spanish Alcoholic Drinks You Must Try

Did you know that the world of Spanish drinks isn’t just about its wines and sparklings? There is also a very appealing variety of liquors for all tastes that most tourists will miss, and yet, they are a very intimate part of the local culture and gastronomy.

So if you don’t want to miss anything, make sure to plan some time after a meal or in the evenings to go outside of your comfort zone and order some unique drinks that you were not expecting to taste. You won’t be disappointed! Let us share with you today the ones we think should definitely make your list. 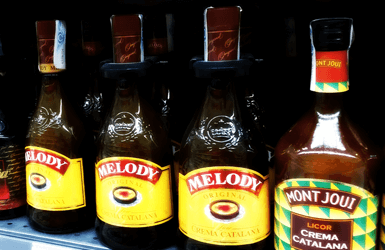 VISIT THE BARCELONA WINE COUNTRY WITH US

This is a Spanish cream liqueur made from Catalan Cream, the most typical dessert of Catalonia, similar to the French Crème Brulee but thicker – which is why sometimes people call this liquor “Crème Brulee in a bottle”. Its aromas are pretty strong, and they linger on even after and incredible finish, and it’s creamy almost as Baileys.

This Crema Catalana liquor is often drank after coffee, but it makes also a delicious shot if you like sweet drinks. It has also a lot of versatility, in the kitchen, as you can use it to make desserts, cocktails, and even ice creams, what makes it a staple in the drink bars of many Catalan homes. Plus it’s easy to find in supermarkets and it’s not too expensive.

Very popular in Latin countries, it might possibly be one of the most famous Spanish liquors in the world. Its name seems to come from its own recipe which includes 43 different Mediterranean citric and fruits. The result is a drink of a pretty golden color that is often mixed in cocktails with fruits or lime, together with coffee, and even added to vanilla and chocolate milkshakes!

What you might not know is that it is the result of the evolution of an ancient drink from the Roman times that was already produced in Cartagena (then, Cartago Nova) a couple of thousand years ago. It was then called Mirabilis (“marvelous” in Latin) and it was even banned by the local authorities because the locals would get too drunk and libertine with it… Nevertheless the recipe survived to our days and it is considered to be the best seller of the premium Spanish brands of alcohol.

While Vermouth isn’t originally from Spain (the main theory takes its origin back to Turin, Italy, being introduced by an Italian merchant that came with the idea of making the flavor of wine stronger by mixing it), it has become a very important part of the aperitif culture in the Spanish society, specially in Catalonia where it’s commonly drank around midday in the weekends together with a few snacks: what locals call “anar a fer un vermut” (going for a vermouth). 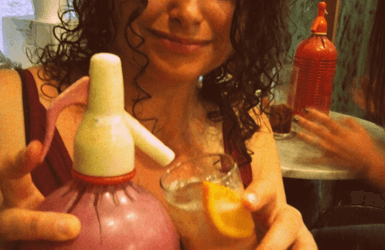 OUR LUNCHTIME TAPAS TOURS ARE GREAT TO EXPERIENCE VERMOUTH

Its strong sweet flavor is obtained from mixing up white wine with caramelized sugars and often some spices, which gives the strong dark tone to the beverage. Interestingly enough, around the world vermouth is usually seen as a mix-with drink and people don’t tend to drink it dry, but Spain is the exception as here in most bars they serve it pure or with siphoned carbonated water.

This is a Spanish herbal liqueur that was created by the Benedictine monks of the Montserrat monastery in Catalonia using local herbs they harvested in the mountain, and it was solely for the use of the monk community and the pilgrims that visited them, although as their popularity grew it started being marketed and now it is produced in a factory outside of the monastery.

With its 31% of alcoholic volume, it is considered a great Spanish digestive drink, helping you lower the swollen sensation you get after a big meal. That’s why it is recommended to drink it without mixing it with other beverages, either neat or in the rocks, as you prefer. The original recipe contains water, sugar, alcohol and 12 herbs including thyme, juniper, lavender, cinnamon, and coriander.

VISIT THE MONTSERRAT MONASTERY WITH US

The most popular brand of Spanish aniseed drink was founded in Badalona (Catalonia) in the nineteenth century. Its original crafting process has been preserved, what makes it a 100% handcrafted product. It is made with anise grain of the best quality, picked rigorously, and it also contains chemically pure water, sugar syrup (refined and filtered) and alcohol.

The company continues to use the same copper stills that were used for the process of distillation in the 1800 hundreds. You can buy it in two different presentations: the green labeled one (dry anise), and the red labeled one (sweet anise). It is drunk on the rocks, or with coffee as a carajillo, and pastry chefs use it to to add a special touch to many recipes.

AND BONUS! Did you know there’s a liquor that Catalans burn in fire?

This drink is an old tradition in Catalonia, originated with the Catalan sailors that gathered along the Costa Brava. Rum was discovered by the sailors in their several trading and business trips to Cuba, they found out that the liquor was great for warming up yourself, clear the vocal cords and it was easy to prepare outside. When sailors arrived to Spain, a lot of them missed the women they left back in Havana, so they gathered to sing habaneras songs and tell their stories while they drank.

VISIT THE BACARDI RHUM MUSEUM WITH US

Rom Cremat is a special preparation made of rum, black coffee, cinnamon, sugar, lemon peel, and coffee beans (occasionally, moonshine or brandy can be added, too). It is prepared in the beach at night, on a clay pot by the fire, and as soon as it is hot, you approach a spark to its surface so the alcohol of the rum lights up and starts burning.

The flame is let firing for at least 10 minutes, and when the coffee is added to the mixture and the fire is extinguished by covering the pot with a ladder. You’ll rarely see it as part of the drink menu of a bar or restaurant, but if you happen to be visiting Catalonia during a traditional festival check the program to find out if there is Habanera singing as it’s likely to be followed by rom cremat drinking.

Have you ever tried any of these Spanish liqueurs?