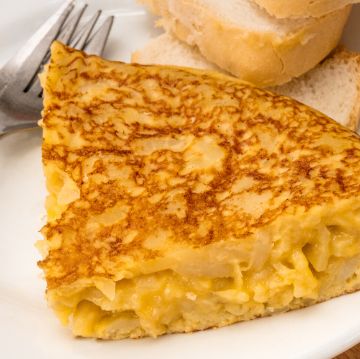 Spanish omelette is a staple in any house in Spain: we often eat it at least once a week, and it’s always present in most informal celebrations and gatherings. Mom’s who don’t know how to make Spanish omelette the right way… are a failure.

When in Spain, you can try Spanish omelette in pretty much any tapas bar, but you can also make it at home. It’s easier than it seems! Today I’m sharing with you my mom’s Spanish omelette recipe, because (of course!) no one makes it better than her.

This is how to make Spanish omelette:​

TASTE THE REAL SPANISH TORTILLA IN OUR TAPAS TOURS

Chop the onions in short strips, and put them in a frying pan with enough olive oil to cover it completely. Start a low heat that makes the oil boil but not burn, and let the onion caramelize until it browns. Remove the onion, strain it well and set aside in a large bowl. Do not throw away the oil left in the pan (you’ll use it next).

Peel the potatoes, wash them well and cut in irregular slices. Breaking the potato rather than making clean cuts will release more starch and the texture will be smoother. Small pieces of about a couple of inches length and about 1/8 of an inch thick work best. 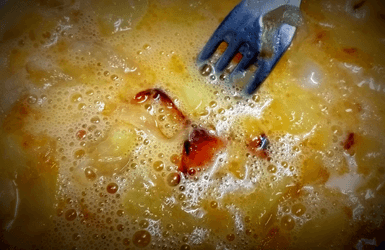 COME ON A PRIVATE FOOD TOUR

Add the eggs and some salt to the bowl, whipping and mixing them well with the onions and the potatoes. It’s OK if the potatoes break, but don’t mash them. My mom’s secret for a perfect Spanish omelette recipe is to let the mix sit together for at least 10 minutes, so the potatoes absorb some of the egg: your Spanish tortilla will them be juicier.

Remove the olive oil that was left in the pan (you can keep it in a metal container and reuse it later for frying other items – it’ll keep a few days). Just leave enough in the pan so it’s wet with oil and the egg doesn’t stick. Heat the pan until it’s really hot: when you pour a drop of egg on it, it should immediately get cooked. Add the eggs mix, let it sit for a few seconds so a thin crust forms underneath. Then break the crust by stirring the mix with a spatula.

Repeat a few times, until it looks a bit juicy but not entirely raw and not too dry: this is how the inside of your Spanish tortilla will look like! Then let the crust form again, and shake the pan to make sure it’s not sticking.

It’s time to flip your omelette over: use a lid or dish as big as your frying pan and make sure it doesn’t stick (wet it with some olive oil if necessary). After flipping it, gently press your tortilla with the spatula, to let the raw egg come out: if that happens, you might need to flip the tortilla over a few more times.

AND BONUS! How to make Spanish omelette even tastier?​

This was the basic Spanish omelette recipe, but you can make it even better by adding some herbs salt (thyme, sage, rosemary…), fried green peppers, a few chunks of chorizo or even some sobrasada spread (you might find it in some specialty stores) – but don’t put it all together: choose only one extra ingredient each time.

And for a final touch, serve on top of some tomato bread (bread slices or toast rubbed with ripe tomato). Enjoy! 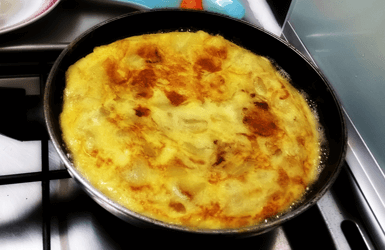 SPANISH OMELETTE IS A STAPLE IN OUR BARCELONA TAPAS TOURS

Have you ever made a Spanish tortilla?​