HOW TO AVOID THE BARCELONA TOURIST TRAPS 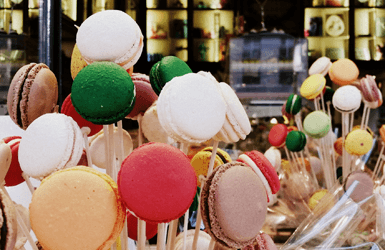 If we made a list of the top ten tourist traps  in Barcelona, I’m sure more than 50% will be in La Rambla. During my tours I often tell my guests that this is a street that they want to check out once, because it’s picturesque and all, but then they probably won’t want to go back anymore. Once is enough.

But even if you only go there once, your experience can totally change depending on what you choose to do there. Actually, most locals try to avoid the street and take the alleys running along it, rather than walking Les Rambles BUT there are a few places we we keep going. Let me share them with you.

Les rambles, the way locals would do:

Las Ramblas is full of places where to get your morning coffee. But please, don’t get it at Dunkin Donuts! Locals would rather order a foamy latte at Pinotxo at the entrance of La Boqueria, or an expresso and a cake at the Escribà cake shop, or to really isolate themselves from the tourists crowds, we’d head to the underground chic café of the Liceu Opera House (the oldfashioned Café de l’Opera across the street is nice, too, but it quickly gets filled up with tourists). And in the morning, at the hotdog place Viena they give you a free baby croissant with your coffee! 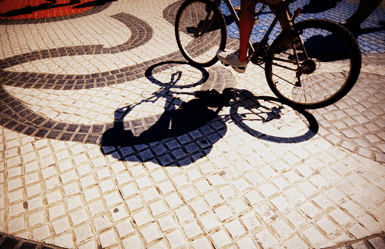 Seating in one of the many outdoor terraces of La Rambla… is the worst idea ever! That should come in any decent Barcelona tourist guide book: You’ll be charged an outrageous bill for just OK food: I still wonder how people keep falling in what all locals agree to be the worst of all the Barcelona tourist traps! Instead, do yourself a favor and eat in one of the amazing tapas bars in the Boqueria Market in Les Rambles.

By all means, do not support the horrible souvenir shops along the street, selling mostly cheap stuff made in Asia. Instead, get a bag in Desigual, some chocolates in the Escribà cake shop we mentioned before, or some music-related item in the oldest music shop in Barcelona: Casa Beethoven.

What is that lady dressed like Marilyn doing in a balcony and waving to the people in the streets? She’s trying to lure you to another of the local tourist traps: the Museum of Erotics. Just skip it and head to Palau Guell, a little known Gaudi work in Nou de la Rambla street, just around the corner from Les Rambles. And of course, explore the Boqueria Market (but come earlier than 11AM to avoid the tourist crowds). Oh, and did you notice there is a mosaic pavement by surrealist artist Joan Miró towards the center of Les Rambles? Most people walk past it without even noticing! 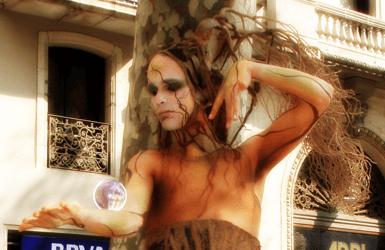 Although mimes and living statues are nowadays found everywhere in the world, Barcelona was the first place to have them around 1992, for the Olympics. There were so many of them that now the city council has regulated them and sent them to the bottom of La Rambla, where they don’t block the way. While it can be fun to watch if you have kids, it’s not a must for adults. However, if you decide to go check them out, here are the rules: don’t take a picture unless you give them a coin first (one euro is acceptable) – otherwise they can get very rude to you!

AND BONUS! What about safety? Are you likely to get scammed in La Rambla? Yes! Here is how you can avoid it:

If you are strolling along Les Rambles and see some people on the floor playing with a pea or little ball and three glasses, and they ask you to guess under which glass is the pea/ball and bet for it… Go away! It’s not street gambling: these people are professional cheaters and they work in groups. While some try to take you in, others will be keeping an eye on the police (they are arrested if they get caught doing that), while other try to pickpocket the people that stops watching the game. So be wiser than them: do not stop!

So what about you? Head to the comments below and tells us: what’s the worst tourist traps you’ve ever seen in your trips?