WHERE TO EAT IN SARRIÀ (UPTOWN BARCELONA)

A SELECTION OF AUTHENTIC RESTAURANTS IN SARRIÀ (BARCELONA)

Sarrià is an off-the-beaten path district in the uptown Barcelona (not to be confused with Sarria, Galicia). It still keeps a relaxed atmosphere that reminds you of the times when it was an independent village before being eaten by the big city. Its classy shops in a pedestrian main street, quiet squares and cozy restaurants and cafés allow you to feel the pulse of the real Barcelona (or at least, the real Barcelona of the upper-middle class). And it is a great idea to explore it after visiting the Monestir de Pedralbes nearby.

Take the Ferrocarrils Catalans from Plaça Catalunya to Reina Elisenda and start your walk from Plaça Major de Sarrià all the way down Major de Sarrià street. You can take the train back to the city center in Sarrià or Tres Torres stations, or if you prefer, a longer walk down Capitan Arenas will take you to Maria Cristina, in one end of the L3 subway line (or take a short detour via Manuel Girona street to see Gaudi’s Dragon gate of the Guell Pavilions and the Palau Reial de Pedralbes gardens). In today’s post we share with you the locals favorite places to eat as you explore the area.

These are our favorite Sarrià restaurants:

“Old Sarrià” is a name that suits perfectly this restaurant founded in 1975 in a building from the 1700’s between two plazas that make the heart of the oldest part of the district: Plaça Major, presided by the Church of Saint Vicent, and Plaça del Consell de la Vila, home to the Town Hall. El Vell Sarrià restaurant has a few outdoor tables precisely in this last plaza: a great opportunity to see people go on their daily businesses while you eat. They serve traditional Catalan food, and they specialize in rice dishes: they have 9 different varieties, which of course include seafood paella but also go “off the beaten path” to suggest earthier rice dishes with veggies, mushrooms, game meat, and the very Catalan combination of countryside products mixed up with seafood (the local version of a surf and turf).

Although more a bar than a restaurant, it had to make our list because it’s famous to have the best patatas bravas in Barcelona. Locals don’t mind to stand in line to be seated in one of their old-fashioned marble tables and devour their golden fries served with two sauces: an oily and spicy one and a flavorful garlic alioli (that’s what they call “mixtas”). To complete the meal, they also serve fried eggs, croquettes, tuna cakes and a variety of tapas. The place feels very authentic, but the waiters aren’t usually very friendly: never mind, you didn’t come here to make friends, but to eat bravas. By the way, they are closed on Sunday, but if you happen to get there when it’s closed, just around the corner there is another bar called Ivorra that is owned by the same people and also serve the same bravas – not as much fun as the original Tomas, but a good enough alternative.

Up Major de Sarrià, passed the Plaça Major you’ll find this classic of gourmet cuisine that combines elegance with a familiar feel. The choice of high quality products and the care with which they are treated are their house seal. Guests will be treated with foie gras, truffle, delicate textures, French inspired sauces, smoked and balsamic flavors and exclusive ingredients such as guinea-fowl, boar or sea bass. Enjoy lavish set menus from €28 and up, or the spectacular Festival of the Chef Isidre Soler: a surprise menu consisting of 3 delicate tapas, 4 courses and a selection of cheeses and dessert. In the Summer, don’t hesitate to get a table in their lovely patio surrounded by greenery and protected from the sun with large white umbrellas.

The old Campi Inn became this traditional Catalan food restaurant in the 1960’s when a then young couple turned it into a restaurant that they named after the mother of the new owner. Now it continues to be run by their sons, who keep up-to-date the large old-fashioned sign by the entrance displaying their offer: tapas, salads, eggs, fish, meats, pasta and tinned snacks, as well as drinks. Simple and unpretentious, but effective and friendly, it is frequented by neighbors and people working in the nearby offices and stores. The perfect place to hide from the tourist crowds and mix with the locals.

For an informal meal with friends or a family with young adults, this place with a bit funky decoration offers lovely tapas and platillos (small dishes of more elaborated cuisine, good to share), traditional fried eggs with fries, and an assortment of friendly mains with veggies, fish and meats. The venue is relatively small, so make a reservation or arrive early to get a table (otherwise you might end up buying a quiche to go in the tempting bakery across the street). On weekdays they have a nice and affordable menú del día (daily specials for a set price), they also serve the now in trend midday vermouth with snacks, and have a screen to watch the Spanish league on match days.

AND BONUS! Find out where to eat in Sarrià the cake that was served in the princess Infanta Cristina wedding? 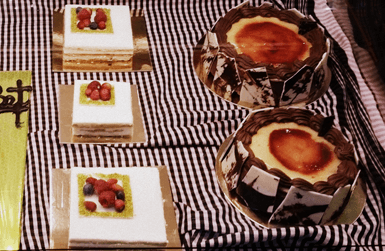 The most famous cake store in Sarrià was founded in 1886, and 6 years later the owners had a baby, JV Foix (1893-1987) that would become a famous Catalan poet. Now it’s hard to say what is more famous: either the cake store or the writer. The store has continued to exist and be run by the same family, serving traditional cakes to the locals for several generations. Actually, the now fallen in disgrace due to the sneaky businesses of her husband, Infanta Cristina, sister of the current King of Spain, was a client of this shop when she lived in a nearby apartment when she was single, and that’s why she commissioned them her wedding cake. a cream milfeuilles with baby wild strawberries that Foix continues to sell nowadays. You can also buy delicate chocolates and truffles as well as the local traditional sweets “petxines de Sarrià”, shaped as sea shells, like those in the Sarrià coat of arms.

So what about you? Head to the comments below and tells us: do you know of any other restaurants in Sarrià that we should add to our list?